创建Wiki
Season Two is the second competitive time period for League of Legends. Season Two began on November 29, 2011, a week after the release of patch V1.0.0.130. The patch introduced the Champion

Volibear, a new set of masteries, the removal of the summoner spells

Rally, and the addition of

(*) The $5 million will be provided by Riot and is not tied to any award provided by the individual tournaments. This amount will increase significantly due to sponsors, etc.

On top of the announced game changes there are noteworthy events taking place during Season Two:

On October 13, 2012, Riot Games will host the thrilling conclusion of our $5 million season in Los Angeles, California. With half of Season Two already in the books and numerous viewership records broken, the best players from North America, Europe, China, Korea and the Rest of Asia are all preparing for their respective Regional Finals. Over the course of this epic tournament series, top teams from each region will clash for the right to advance to the World Championship in Los Angeles, where the winner will bring home the lion’s share of a $3 million combined prize pool – the biggest payday in eSports history!

You can find a complete list of the locations and dates of the Regional Finals below.[8]

The IPL Pro League crowns another champion this weekend at the Cosmopolitan Hotel in fabulous Las Vegas. The IPL4 Championship runs from Friday, April 6th through Sunday, April 8th: featuring eight of the best teams in the world, facing off in 5v5, double-elimination, best-of-three format until a single victor remains!

There’s no better place to catch all the action than our official event site, which covers everything on the ground in Las Vegas.

We’re closing in on the Season Two World Championship, and with the largest prize purse in eSports history on the line, the stakes have never been higher. Beginning October 4, the top League of Legends teams from all across the globe will collide in Los Angeles, California, to compete for a $2 million prize purse. When the smoke clears at the USC Basketball Arena, one team will be crowned Season Two World Champion!

The Season Two World Championship will span two weeks: the World Playoffs at LA Live from October 4th through October 6th and the World Finals at the USC Basketball Arena on October 13th. At the World Playoffs, twelve teams from North America, Europe, China, Korea, Taiwan and Southeast Asia will do battle over three days to determine the two finalists. At the World Finals, the two remaining teams will compete in an epic best-of-five series in front of thousands of cheering fans for the grand prize and the title of Season Two World Champion. 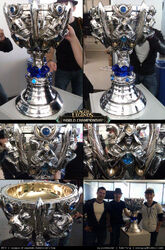