Ionia versus Noxus: Rematch was an event by Riot Games in which ten players were selected to play an official match that will affect the course of Runeterra's lore. The result of the match was victory for Ionia.

150px
Soon after Noxus and Demacia signed a treaty agreeing to settle their disputes through matches held by the young League of Legends, Noxus turned its expansionistic eye outward. Bolstered by the forces of Zaun and Bilgewater, Noxian soldiers invaded Ionia in what became the bloodiest engagement since the Rune Wars. Rallying its forces, Ionia managed to halt the progress of the invaders, but Noxian forces entrenched themselves in three of Ionia's southern provinces: Galrin, Navori, and Shon-Xan. Seeking to avoid further bloodshed, Ionia joined the League of Legends and petitioned to have the Noxians removed from Ionian soil. The decision was made to settle the matter on the Fields of Justice.

The match was coined "The Trial for the Isle" and it captured the attention of all of Runeterra. Despite the best efforts of Ionian champions, Noxus prevailed, although rumors abound that foul play was involved. Noxus was granted the right to maintain its occupation of the Ionian provinces, and no appeal of the decision could be made for fifteen years.

300px
Seven years later, on the twelfth of October, 20 CLE, a single

Shojin monk shocked the world when he traveled to Ionia’s Lotus Gardens and set fire to himself in protest of the Noxian occupation. He channeled inner magic to preserve himself in a state of perpetual agony while ablaze in the garden, and he will remain there until the last leaf falls from the sacred bonsai resting next to him. Almost immediately, there was a public outcry for the League to reconsider its ruling. Moved to action, many of Ionia’s most notable figures spoke out, demanding an early rematch.

150px
In uncharacteristic fashion, Noxus offered Ionia an early rematch, putting to rest concerns that Ionia might betray its agreement to abide by the League’s previous ruling.

Ionia accepted Noxus' offer, and the two city-states entered negotiations to solidify the stakes of the match. It was ultimately determined that if Ionia wins, Noxus must withdraw its forces in full, and immediately halt any and all extraction of Ionian resources. However, should Noxus prevail, Ionia must completely surrender the southern provinces to the nation of Noxus, and furnish one Noxian designee with a seat amongst the Ionian Elders. This would give Noxus a voice and ear inside the government of Ionia.

Preliminary analyses indicate that this rematch may be the most highly anticipated event in all of League history.

The Date of the match has been decided, 10 December, 20 CLE. Summoner's Rift. The battle begins at 6:00 PM, Pacific Standard Time.

After the victory of the Ionian Summoners there were various consequences:

The League has approved ten champions for each side. Each team will have the opportunity to ban one champion from entry into the battle. Each side will then commence with a draft until each side has selected a team of five.

Summoners who are not selected for the historic match are encouraged to stage Custom Games that pit Ionia versus Noxus, in accordance with each side's champion pool. The League invites image captures of the battle results to be posted in an official thread. It may shed light on the odds of victory for each side!

The Fate of Ionia 编辑 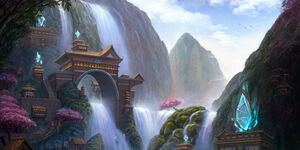 The fate of Ionia hangs in the balance.

Should the enlightened city-state of Ionia conquer their oppressors, Noxus has agreed to withdraw from the island. The provinces of Galrin, Navori, and Shon-Xan in southern Ionia will be liberated, a freedom they have not tasted in years.

Should the powerful city-state of Noxus emerge the victor, the three southern provinces currently being occupied by Noxus will become permanently governed under Noxian rule. As per the governance of Ionia, the provinces will be represented by selected dukes and duchesses, which hold court in the Convergence of Elders, Ionia's governmental assembly. All decisions made in the Convergence of Elders will thus include Noxian voices in the fray.

The summoners representing the winning city-states will be honored with a supervised visit to the Arcanum Vault, located underneath the Institute of War. They will be the first city-state affiliated summoners to be allowed access to the Vault. They will be presented with two items and granted the privilege to select one to be added to shop shelves on the Fields of Justice. The item will be named in honor of the victor.

The two items that the League has selected are a pair of boots and an item from the famed artificer Doran's collection. Both items grant unique abilities compared to the existing boots and Doran's items currently available. The item selected for sale will be dedicated in the winning city-state's honor.

(Side note. Guardsman Bob has said on stream that the second item was a Doran's item for casters which had a small percentage of spell vamp, however he voted for the other one because he dislikes the mechanic)

100px
Riches will be bestowed upon the victor. 2800 RP and 6300 IP will be allocated to each summoner on the winning team. They will also be bestowed with a Trophy Ryze skin, a skin exclusive to winners of official matches.

The defeated summoners will also receive spoils to reward a well-fought battle. 1380 RP and 3150 IP will be allocated to each summoner on the defeated team.

All summoners can join in celebrating the victory for the winning side. Select champions from the winning faction will be on sale for a lowered price for a limited time after the match.