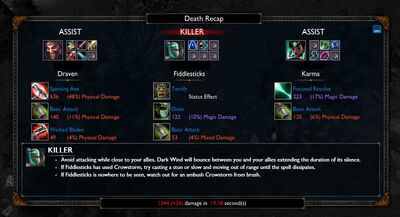 Death Recap is the damage recap feature before a champion's death in League of Legends.

It is displayed when a player’s champion has been slain; the player can open the Death Recap window which will summarize all of the damage they received during their final moments. At the bottom of the recap window, it shows the total of the damage, and the amount of time in which it occurred.

The Death Recap window provides informative tips on how to avoid being killed by the same Champion and spells again by hovering over the Champion's section of the window or hovering over the spell icon respectively. It also displays the items the killing and assisting Champions have, and the stats of those items. The fatal damage taken is broken down on an integer and percentage basis, so that players can have a complete and thorough understanding of exactly how they were taken down.

A few glitches still exist, such as towers adding to a Champion's basic attack damage. These glitches are negligible, however.

In the death recap, there are some spells such as

Toxic Shot which modify basic attacks, and so it counts for all the damage. For example, you could see

Toxic Shot. Additionally, damage dealt by the Nexus Obelisk does not show up on the Death Recap in any form.