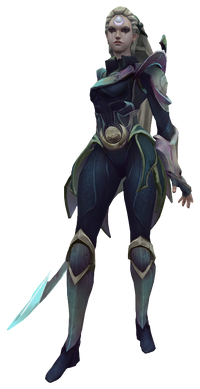 An unyielding avatar of the moon's power, Diana wages a dark crusade against the sun-worshiping Solari. Though she once sought the acceptance of her people, years of futile struggle shaped her into a bitter, resentful warrior. She now presents her foes with a terrible ultimatum: revere the moon's light, or die by her crescent blade.

Though she was born to the Solari, Diana's inquisitive nature set her apart from her brethren. She had always found solace and guidance in the night sky, and questioned the dominance of the sun in her society. The Solari elders responded to her challenges with only derision and punishment. Diana remained convinced, however, that if she could find evidence of the moon's power, the elders would listen to reason. For years, she studied Solari archives in solitude until she discovered an encoded message hidden in an old tome. This clue led her to a secluded valley on Mount Targon where she unearthed the hidden entrance to an ancient, sealed temple. Inside, among aging relics and faded murals, she found an ornate suit of armor and a beautiful crescent blade, both inscribed with sigils of the moon. Diana donned the armaments and returned to the Solari elders that night. She declared that the artifacts proved others had once worshiped the moon as she did. Her discovery of evidence challenging Solari dominion shocked the elders. To Diana's horror, they pronounced her a heretic and condemned her to death. As the elders prepared her for execution, Diana's anger and sorrow overwhelmed her desire for acceptance. She lifted her gaze to the sky, calling upon the moon for strength. Lunar power surged within her and she shattered her bindings. Raising her relic blade, she turned and slaughtered the elders. With the temple in ruins behind her, Diana resolved to destroy all those who would deny the power of the moon.

"The sun does not reveal truth. Its light only burns and blinds."
―Diana

Not all creatures of the night are the sort that lurk in the shadows. A select few leap headlong into the fray, leaving enemies begging for sunshine. Shunned by the people of the sun, Diana turned in isolation to the cold power of the moon's glow. She hurls herself into the heat of the fight, wielding her crescent blade and unleashing lunar energy with merciless ferocity. If you're awed by the darkness of the night, but never one to hide in the shadows, you're sure to be drawn to this knight of the moon and her relentless pursuit of vengeance.

Diana, Scorn of the Moon, Revealed编辑

The tide of battle is turning, summoners. With ceaseless aggression, powered and protected by the lunar light, Diana, Scorn of the Moon, controls and chases her enemies through the battlefield, leaving them no sunlight for solace.

Diana's high area of effect damage and defensive abilities make her an ideal jungler. Pale Cascade creates three orbiting spheres that detonate and deal damage to any enemy that comes close, while protecting her with a shield that absorbs any incoming damage. If all three orbs are detonated, the shield effect is refreshed, allowing her to absorb even more punishment. This destructive shield, combined with a cleaving attack from her passive, Moonsilver Blade, helps her deal out significant damage to multiple targets as she quickly tears through jungle camps.

Drawing power from the moon, Diana's kit revolves around her use of Moonlight to prep her enemies for an incoming attack. The breakneck pace of Diana's gameplay and her relentless chasing potential are driven by the interplay between Crescent Strike and her ultimate ability, Lunar Rush. A unique curved skillshot, Crescent Strike unleashes lunar energy in an arc, damaging any enemies in its path and simultaneously afflicting them with Moonlight. Casting Lunar Rush to teleport to an enemy afflicted by Moonlight will reset the ability cooldown while consuming all active Moonlight debuffs. Judicious use of Moonlight combined with accurate casts of Crescen Strike gives Diana incredible mobility and sustained damage throughout a long fight. While using Lunar Rush only in combination with Moonlight will give Diana the highest damage output over time, you may make a judgment call and accept the longer cooldown to either directly rush a vulnerable target or double tap a Moonlight afflicted enemy for heavy burst damage.

Diana's kit really comes together in a team fight. After initiating with Crescent Strike and Lunar Rush, she can follow up with Moonfall, drawing in and slowing all nearby enemies, holding them in range for Moonsilver Blade and Pale Cascade until Crescent Strike is ready again. The added durability of her shield helps her survive heavy damage, while the mobility of a Moonlight-enhanced ultimate helps her pursue and assassinate high-value targets. With the complex interplay of her abilities, Diana's got the potential to control the jungle while executing quick ganks and threatening enemies in team fights.

The Creation of Diana: Art, Story and Sound编辑

Inspiration for a champion’s artistic design comes from many places: gameplay mechanics, champion personalities or a walk in the wilds, just to name a few. Sometimes new champions are even inspired by other champion stories, and so was the case with Diana, Scorn of the Moon. While her artistic motif naturally pays homage to the moon, the art was further influenced by her relationship with Leona and its transforming effect on her personality. The artists, animators, sound designers and creative designers envisioned Diana as a character long before they knew her as the champion we see today. A few of them came together to discuss Diana’s origins and evolution through art, story and sound.

Diana’s development began with a heavily story-driven concept and along with her aggressive gameplay, she’s now one of the most anticipated champions to join the League. To give you insight into the story of Diana’s creation, three of her designers are holding a Reddit AMA this Friday, beginning at 12:00 PM Pacific Time. Join Devon “Runaan” Giehl (Creative Design), Michael “IronStylus” Maurino (Concept Art) and David “Volty” Abecassis (Game Design) as they answer your most burning questions about the Scorn of the Moon, sharing the knowledge you’ll need to blot out the sun and embrace the heresy.

Inside Design: Scorn of the Moon编辑

In our discussion about The Creation of Diana, we looked at the how the Scorn of the Moon was inspired by another story within the League. This impact isn’t limited to personality, art or sound. Diana’s complicated tale affected her gameplay as well. Her kit reflects her tragic story and her relationships with Leona, the Solari and the moon. We spoke with a few of the Designers involved in execution of Diana’s gameplay and they explained this aggressive champion’s origins.

Whether you protect the faith or embrace the heresy, you’ll enjoy chasing and assassinating your enemies on the battlefield with Diana, Scorn of the Moon. Diana’s stark beauty and aggressive gameplay reflect her complicated relationship with Leona and the Solari. Using her Crescent Strike and Lunar Rush combo, she relentlessly pursues her enemies across the battlefield. She aids her allies in team fights with Pale Cascade and Moonfall, absorbing damage and dragging foes back within striking distance. Your quick decision-making and strategic moves will make this jungling assassin shine in the moonlight.

Replacing the moon’s glow with even deeper shadows, Dark Valkyrie Diana features a new model and effects befitting her darker motif for all of her spells and attacks.