Before Nocturne, people believed that dreams were figments of their imaginations, meaningless images that flashed through the mind when one slept. This belief was put to the test when a rash of sleep-related incidents started afflicting summoners of the League. Some would wake up screaming, terrified and beyond consolation. Some could not fall asleep, slowly going mad as the nights ticked by. Some simply never woke up. Physicians were baffled until a Field Architect happened to pass out next to a nexus on the Twisted Treeline. Witnesses said he cried out once and then stopped breathing. Immediately after, magical energy arced out from the nexus, and Nocturne appeared.

Nocturne did not take his introduction to this world kindly. He slaughtered everything he could find before summoners were able to magically confine him. After a period of intense study, League experts divined that Nocturne hunted summoners in their sleep, attacking them in a place where their magic was useless. This seemed to be his only purpose. The families of the victims demanded justice, but League officials were concerned that death might only return Nocturne to the place from which he came. They bound him to a nexus fragment, trapping him in the physical world. As punishment for his crimes, they allowed summoners to call upon Nocturne in League matches, bending his will to the summoners he hates and creating his own personal nightmare. League scholars don’t know whether he truly came from the plane of dreams, or whether there are any more like him. Some theorize that the summoning act affected the summoners' subconscious minds, luring Nocturne to them in their sleep. Perhaps the most disturbing theory is that Nocturne is a person’s nightmare come to life. If this is true, they wonder, who is the dreamer?

Nocturne spins downwards like a drill and gets stuck in the ground. 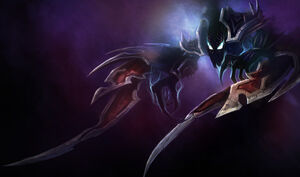 Have you ever taken in a horror film only to go to bed with your eyes wide open on the lookout for things that go thump in the night? Well while we’re on the topic of things akin to ghosts, goblins, phantoms, specters, apparitions, poltergeists and very possibly the boogieman, allow me to be the first to introduce you to Nocturne, the Eternal Nightmare. But don’t worry! While he might feature prominently in the next thriller you decide to take in, you probably won’t find him hiding under your bed or in your closet. Or will you?! Don’t be paranoid!

A fearsome shadow is about to fall upon the Fields of Justice as the extraplanar, Legendary Eternum Nocturne tears through space and time to cull those who do not belong. He lingers yet, waiting and watching, but he'll soon be ready to cast a shroud of darkness over your battles."