For his incomparable skill with the bow and his unquestioned sense of honor, Varus was chosen to be the warden of a sacred Ionian temple. The temple was built to contain an ancient pit of corruption so vile that Ionian Elders feared it could envelop the island in darkness. Varus prided himself on his position, as only the most exceptional Ionian warriors were selected for the role. He lived with his family in a nearby village and led a quiet life of disciplined routine until the day the forces of Noxus invaded Ionia. Their shock troops left nothing but death and desolation in their wake, and the temple lay in their path. Varus was forced to make a decision. He was bound by honor to stay and defend the temple, but without him the village's few inhabitants could offer little resistance against the oncoming war machine. Gravely, he chose to fulfill his duty as a warden. The corruption could not be allowed to escape.

His arrows sundered the troops who tried to wrest the temple from him that day. However, when he returned to his village, he found that it had been reduced to a smoldering graveyard. Remorse at the sight of his slain family gave way to overwhelming regret and then to seething hatred. He swore to slaughter every Noxian invader, but first he needed to become stronger. He turned to that which he had sacrificed everything to protect. The pit of corruption would consume him wholly, as a flame devours a wick, but its abominable power would burn within him until he was lost. This was a path from which there could be no return. With grim resolve, he condemned himself to the black flames, feeling malevolent energy bond to his skin... and with it, the promise of ruin. He left, seeking the blood of all Noxians involved with the invasion, a grisly task that eventually led him to the invasion's most infamous perpetrators in the League of Legends.

He absorbs his bow, lest he be tempted to use it in the Institute of War; it slithers into his palm to rest. The polish of the chamber is immaculate, so that in its ornamental shields and blades his form can be seen reflected; "his" form, though he can never recognize it as his own. His arms disappear into black gauntlets of a liquid that can't entirely decide on a shape; brackish muck creeps from his toes nearly to his navel, scabbing over into plates.

What might seem purely black is, upon closer inspection, almost infinitely complex in color; it travels his surface like an oil. Varus wonders if it might have claimed more since yesterday, lapping as it does at what pure flesh remains. He decides that he is, on the whole, satisfied with their arrangement - even if mirrors show him a creature like this.

I am not broken, he tells himself. Not broken. Simply have a different shape.

Showing Theshan where to hold the bow, how to draw, and how to remember his breath gave Varus a better understanding of these things himself. His son would need to know these things for himself; his father had been anointed Temple Guardian, after all. He wouldn't always be there.

Varus wasn't there now, strictly speaking; none of this was real, and his clever eyes knew it.

This was some game Summoners played to amuse themselves with aspirants to the League. But here was his son, blessedly alive. He tousled the boy's warm hair. Varus knew what was coming, and he took such blessings where he could. The two of them looked up the hill, up, until they saw the Temple itself.

It was older than the village, much older. A statement from a bygone era of plenty, there was no pragmatism in its construction.

"I did not know it at the time, but yes," replied Varus.

"They left a single man in its defense?"

Much surprised him about his new role. The old prayers he'd said every day since he was a boy, it seemed, were missing a few grave syllables; the Elders had been holding out.

Tattoos of the clever Owl, applied to the face, chest, and arms had altered his perception; this too was surprising. Then, there was The Pit, and just five feet across, it was hard to imagine this featureless disc could be the source of so much concern.

He was most surprised, perhaps, when - on his first night's vigil - it began to speak.

Not with words, no - words would have been much easier to deflect. It spoke in moments, mostly: images, sensations. It knew people, it could taste them on the air. It knew that they had a hive at the base of its hill, where they writhed in their nonsense bodies. Varus could sense its confusion, and something like being hurt; the isolation of the temple had accrued in it. It wanted to show him something he would like. It wanted to make something for him. Its urge was to please.

This was not the "implacable beast" he had been sworn to contain.

Once, as Varus entered the sanctum to perform the morning's Rite of Sealing, he was made to see himself, surrounded by others of his village, standing with a young man's vigor while those around him withered like crops, their skins falling off like sacks. He could sense that it seemed somehow pleased with itself.

"Now?" it offered, confident in the reply.

When it spoke next, he ceased to exist in the present altogether. Instead he waded through ankle-high blood, the ripples he made growing and rising until they roared and crashed. He heard a voice, then, or the idea of a voice, which said, pleadingly, "Now?"

The bite of the incense, with its teeth of rosemary and oak, cut through the vision. He fell back on the palms of his hands, turning and scrambling to load the brazier. It tipped on its copper chain, spilling and searing his hands.

It crashed against his mind, but the Owl asserted itself. It gave him will enough to pull himself along the maze-like walls to the doorway, where he could see the village burning; again, he had to see it all again.

He was given a vision then of a thousand, thousand dead. It was a wedge pounded through his ribs and into his heart. He fell to his knees.

"Now?" It was almost a whisper.

And when he did so it broke a dam deep in the earth, so that the placid disc of the pool reached up from its heart and splashed out, leaving jags of hot black glass standing wherever it touched. It was flowing through the air, around the curling smoke until it struck Varus off his feet. It peeled his hand, digesting it, consuming the bow. It ate both arms, and both legs, stopping out of... respect, if respect it may be called, for the Owl; it would not surpass the markings. In a moment of detached madness, Varus wondered how long that would last.

The Reflection wavered, and a summoner panted with exertion; the images wrested themselves from their bindings, careening through a nightmarish series of scenes with an animal immediacy. The room solidified, rendered overbright by the alien senses which collected the last few years of Varus' grim past:

Only the tips of each of his toes touched the ground; Varus knew the force couldn't be far. When he overtook them, the cart at the head of the column had the wisdom to encourage its horses. Those without wisdom, or those cursed by circumstance, began to die with terrible speed.

As Varus slowed, an apparatus with a bow's purpose, if not its shape, leapt to life for the first time at his wrist. He needed not be instructed in its use; a man was instantly pierced, burst like a wineskin. This proved a true inspiration to his fellows, who found within themselves a speed they never knew possible; though even at this speed, they were still beings of flesh and blood. Insufficient.

Though what it fired wasn't an arrow, it behaved as one; it ruined as one, traveled through the Noxian insignia, out of one gasping soldier and into another, exploding with six thirsting tongues that gripped and snared. With every death Varus shot faster, until by the end there was no sense that each shot was discrete. The Prey simply ran until it fell. It was elegant horror.

Time passes quickly. There were more hunts, and more blood; mercies were promised, but withheld. Darkness swirled with the scent of wet leaves, oddly sweet, the broken bodies of men and women rendered wholly abstract in the course of their annihilation. Varus knelt over a sundered cart to seize a communique, pierced through by one of his sharp tendrils; it revealed the names of yet a few more Noxian dogs, responsible for issuing the order...

The damning order. What they took from him he would repay a thousand-fold.

A summoner stepped forward, her mask of judgment impassive, her presence sweeping away the last threads of the vision. "Your purpose here is clear. You have discerned that among our Champions there exist Noxian agents. This, all of this," she waved her hand, "is the prosecution of some vendetta."

"You understand, of course, that your vengeance is not the purpose of the League?" she said, eyes narrowed.

"By now, you surely realized," said Varus, or the amalgam which stood before them cloaked in Varus, its tongue swollen and black.

"It is the only purpose I have left." 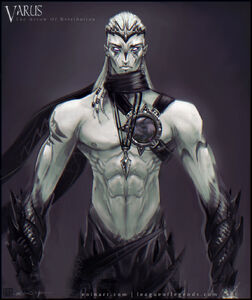 "When the world turns its back on you, sometimes you have no choice but to answer with stone-cold revenge. No one knows that better than our newest addition to the League, Varus, the Arrow of Retribution. Wielding a powerful bow consumed by dark magic and an unrelenting thirst for vengeance in his heart, Varus is primed to leave a wasteland of fallen foes in his path.

We teamed up with Gabe and Tycho from Penny Arcade to create a special edition Sneak Peek and Judgment. Read on, summoner, but be vigilant; Varus joins the League in an upcoming patch."

Varus, the Arrow of Retribution Revealed![]

If you’ve been wondering what can happen when someone really, truly lets their dark side get the best of them, then look no further than Varus, the Arrow of Retribution. This dangerous combination between caster and ranged carry is equipped with a number of abilities designed to both whittle enemies down from range, and allow him to close in for the kill.

The lynchpin in Varus’ kit is Piercing Arrow – a long ranged skill shot attack that damages enemies in a line. Pressing Q will cause Varus to draw back his bow, reducing his movement speed, but steadily ramping up damage and range (up to a cap) until you left click to select a target. Through creative positioning Varus can either use this skill to pepper enemies with long range attacks or close out a kill on a fleeing enemy with a hard-hitting shot.

In lane, Varus’ unique combination of abilities gives him the ability to apply constant pressure to his opponent. Piercing Arrow allows him to both farm safely and damage enemy champions without fear of reprisal. Meanwhile, the area of effect healing debuff from Hail of Arrows complicates a support champion’s efforts to out-heal the attrition damage. When the time comes to move in for the kill, Living Vengeance keeps Varus’ Attack Speed high while he’s last hitting, enabling him to quickly stack up Contamination charges from Blighted Quiver in preparation for a finishing blow.

In team fights, Varus’ long range allows him to maintain safe positioning until he’s able to score a kill on an enemy champion. Once he’s picked off an enemy, the massive Attack Speed boost from Living Vengeance combined with area of effect crowd control from Chains of Corruption make him a truly terrifying sight on the battlefield.