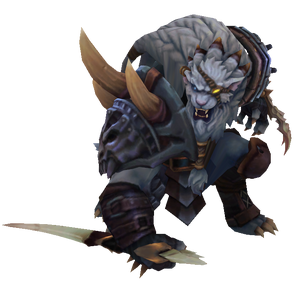 On every wall of his den, the trophy hunter Rengar mounts the heads, horns, claws, and fangs of the most lethal creatures in Valoran. Though his collection is extensive, he remains unsatisfied, tirelessly seeking greater game. He takes time with every kill, studying his prey, learning, and preparing himself for the next encounter with the 20px one monster he never managed to defeat.

Rengar never knew his real parents, but was raised by a human who was revered as a legendary hunter. He was an ideal pupil, intently absorbing the lessons of his father, and improving them with his uncanny feral instincts. Before his mane had fully grown, Rengar set off on his own and claimed a wide territory for himself. Along its perimeter, he mounted the skulls of his slain prey - a warning to would-be aggressors. He thought undisputed reign of a region would fulfill him, but instead, he grew restless. No beasts in his domain proved challenging prey, and without formidable adversaries to push his limits, Rengar's spirit waned. He feared that no worthwhile game remained, that he would never again feel the thrill of the hunt. Just when things seemed their bleakest, he encountered the monster. It was a disturbing, alien thing, distinctly out of place in his world. It bore huge scything claws and devoured any animal that strayed across its path. Overzealous at the prospect of a challenge, Rengar ambushed the monster in haste. It far outclassed anything he'd hunted before. Their fight was savage, and each suffered crippling wounds. Rengar lost an eye, but the most grievous blow was to his pride. He had never before failed to make the kill. Worse yet, the severity of his injuries forced him to retreat. Over the following days, he hovered on the threshold between life and death. He was wracked with pain, but beneath it, he felt a glimmer of joy. The hunt was on. If such powerful beings existed in the world, he would find them, and stack their heads high. The monster, however, was a kill he wanted to savor. On his den's largest wall, he reserves a space for the beast's head, a trophy he swears will one day be the centerpiece of his collection.

Your enemy's heart beats nervously, pumping faster as you approach. The time is right for the perfect strike, that split-second when your victim thinks no one has followed.

Whether you meet Rengar face-to-face on the battlefield or back-to-blade during the hunt, you're never alone and never safe when the Pridestalker's chosen you as his trophy.

The ultimate predator‘s many things: methodical, determined, and unrelenting. Meet Rengar, the Pridestalker, one of the most-feared hunters in all of Valoran, whether he’s slashing his way through foes or leaping from the shadows of the brush to take enemies by surprise. Rengar’s monstrous, most-sought prize, however, remains at large, missing from the Pridestalker’s impressive trophy wall.

As a top-laner or jungler, Rengar’s brutal strikes and roars tear through his enemies. When you use any of his abilities on an enemy, you generate a point of Ferocity. Once you’ve stored five Ferocity points, Rengar’s skills become available instantly and the next skill activated gains a powerful new secondary effect. Players will have to strategically manage their Ferocity, activating the appropriate ability for each precarious situation. Rengar’s passive also grants his auto attack a leap when used from the brush or while invisible, giving this apex predator immense ganking potential from hiding.

Rengar’s ultimate ability, Thrill of the Hunt, grants him invisibility, extra movement speed and Ferocity points. The true power behind Rengar’s ultimate is his visibility of enemies under the fog of war. Rengar enters an all-consuming hunting mode, allowing him to see enemy locations and their hearts beating faster and louder as he closes in.

No hunter would be whole without his trophies and Rengar is no stranger to collecting the prized remains of his downed prey. Playing as Rengar grants optional access to the Bonetooth Necklace, a unique store item that collects trophies as he racks up kills and assists. Slaying enemies will increase the power of the necklace and new bonuses unlock when trophy thresholds are met. You’re never forced to purchase or use the Bonetooth Necklace, but are rewarded for an aggressive playstyle if you choose to use it.

The Fields of Justice have never been more dangerous than when Rengar, the Pridestalker, prepares for the hunt. With a new resource system, an optional item in the shop, and a dynamic passive that interacts when he’s stealthed or in the brush, Rengar‘s bringing many new mechanics to strike down his prey. To learn more about these new mechanics, we went straight to the source and talked to Trevor “Classick“ Romleski about Rengar’s kit.

The Creation of Rengar: Art and Style编辑

In order to bring a ruthless hunter like Rengar to life, the designers had to fuse every aspect of champion design into a predatory experience that feels as ferocious as the champion himself. Getting players inside Rengar’s head for the primal hunt was the biggest challenge in his creation. What began as a tricky proposition eventually became a compelling champion with an ultimate ability that sums up the brutal and methodical Rengar playstyle.

Don your Bonetooth Necklace, sharpen your claws, and stand alert to your enemies’ presence. Now it’s time to take control and prowl through the jungle, pounce from the brush, and hunt the most fearsome prey in all of Valoran as Rengar, the Pridestalker!

How do you make Rengar even more dangerous? Add a gigantic skull to his shoulder and clad the Pridestalker in heavy armor to deflect the gnashing and flailing of the strongest prey. You’ll also get new effects on Savagery and Battle Roar for even more brutality.