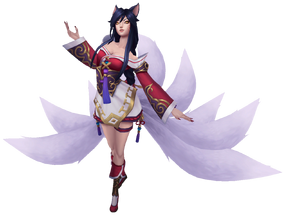 Ahri plays with her orb like it's a basket ball using her tails.

Ahri was designed by Ezreal.

Announcement made in the Sneak Peek by Average Gatsby[1]:

Occasionally we debut future champions a bit ahead of time because we’re super excited about them and we just can’t contain ourselves!

Let us introduce you to our take on the Asian legend of The Nine Tails Fox:

We think her combination of strength, beauty, power and grace will yield a fun and amazing champion to play! While she is very early in development, here’s a little sneak peak at what she’ll be able to do:

Based on the story of a fox who wanted nothing more than to become human, this champion will be a ranged caster who utilizes her Fox Bead to decimate her opponents on the battlefield. She’s going to be extremely agile and versatile, using her nine tails to maneuver in and out of combat with style and grace. She will also make use of her Fox Fire, where she will summon balls of fire which will seek out and destroy nearby enemies.

She’s very early in development, so as always her abilities and artwork are subject to change, but we hope you’re as excited about her as we are!

Announcement made in the mechanics preview by Morello:[2]

Back in the end of September, we announced The Nine Tails Fox much to the excitement of our community. Well the time has finally come and after much anticipation, we wanted to reveal the gameplay style for Ahri, the Nine-Tailed Fox.

This is largely accomplished through her ultimate, which allows her to dash multiple times before going on cooldown. Ahri can either use all three quickly to chase, burst, or escape, or she can spread out their uses to keep enemies guessing and juke around the battlefield. Combining this with her high magic damage and her Seduction ability to lock enemies down, she can strike from unexpected angles or bait enemies into over-committing to disadvantageous situations.

Ahri's major gameplay decisions are based on her assessment of risk/reward. Her burst is high, but must be in short range to maximize it. This creates a dynamic that requires her to endanger herself to reach full potential. Play it safe and have more light damage, or commit and go for the kill? Use your dash for damage, or save it for escape? The choices are constant with these opposed strengths and weaknesses.

Her kit is really designed to appeal towards opportunistic players who prefer characters with a lot of action, and especially players that like to lull enemies into overconfidence, only to capitalize and punish them. Ahri's dangerous, seductive nature is something we're happy to deliver for players who like to toy with their enemies before destroying them.

This blazing-hot new take on Ahri, the Nine-Tailed Fox, will definitely turn up the heat. Featuring fiery ambient effects on her tails along with some sizzling new spell effects on Foxfire and Spirit Rush, Foxfire Ahri is sure to leave you sweating.