Whenever Jarvan III, the king of Demacia, delivers one of his rallying speeches from the glinting marble balcony atop the Royal Palace, Xin Zhao is at his side. Coined the Seneschal of Demacia, Xin Zhao is the personal steward of the Lightshield Dynasty. His enigmatic, silent vigil has led to an abundance of conjecture concerning his “secret life” and origins. Whether it’s "Zaun double-agent" tendered at the dinner table or "indebted rune mage" mused in the editorials of the Demacian Constant, Xin Zhao betrays no hints to sate the curiosity of the masses…for good reason.

Prior to the formation of the League, Noxus was renowned for a spectacle called The Fleshing. It was a gladiatorial event with a cruel twist: as a fighter won matches, his number of opponents (generally prisoners of war) fought simultaneously would increase. This meant eventual death for every contender, but with unparalleled glory. Xin Zhao, known then as Viscero, was slated to face 300 soldiers, nearly six times the previous record. This was clearly meant to be his final match. Jarvan II, hearing of this unprecedented feat, infiltrated the arena to offer him an alternative: serve Demacia and punish those who ultimately sentenced him to death in exchange for his freedom. Xin Zhao accepted, astonished that a king would risk his own life on his behalf. Under the cover of a prearranged Demacian assault on Noxus, Jarvan liberated Xin Zhao and his 300 opponents. During their retreat, Xin Zhao took a poisoned dart meant for Jarvan. This act of loyalty, from a man who vowed no allegiance, earned Xin Zhao a spot at his side until the day the king died. Now in the service of his son, Jarvan III, Xin Zhao is stepping into a new ring – the Fields of Justice – to fight for his adopted country and to honor the legacy of the man who gave purpose to his life.

"Death is inevitable; one can only avoid defeat."
―Demacian Manual of Arms 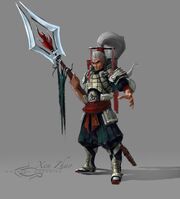 Xin Zhao was first shown by some players of the Community, which found his Sound-files and other elements of him in the data. He was at PCGamer.com on the 2nd July 2010[1], which also included a rough description of how a champion is created by Tom Cadwell. It was announced on the front page on July 7th, 2010.[2]

Xin Zhao Wants You to Join the Winged Hussars!编辑

The Seneschal of Demacia is here to let you know that the Winged Hussars are on the lookout for new recruits! The legendary Winged Hussars will be opening up their books to new members starting this Monday, the 26th of September, so don’t miss roll call! If you’re ready to don your set of historical-inspired armor, you’ll be pleased Winged Hussar Xin Zhao is on the march!

The League of Legends wants you, summoner! Do you have what it takes to join the ranks of these elite knights?!