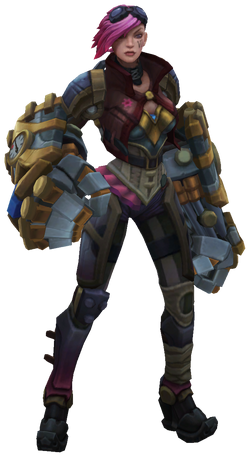 To Vi, every problem is just another brick wall to punch through with her gigantic hextech gauntlets. Though she grew up on the wrong side of the law, Vi now uses her criminal know-how to serve Piltover's police force. Vi's brash attitude, abrasive humor, and blatant refusal to follow orders can often infuriate her by-the-books partner,

Caitlyn. But even the sheriff of Piltover cannot deny that Vi is an invaluable asset in the fight against crime.

As a child growing up in the lawless outskirts of Piltover, Vi learned to rob and cheat to get by. Stealing and stripping hextech hardware gave her the skills of a master mechanic, while life on the streets taught her self-reliance. When she was six, a ragtag group of criminals took a shine to the young delinquent and brought her into their fold. By the time Vi was eleven, she had become a seasoned accomplice, and she relished the thrill of every heist.

Vi's attitude changed when a raid on a mining facility went bad. She was forced to decide between fleeing with her crew or trying to save the innocent mine workers from a collapsed tunnel. Vi chose to play the hero. While searching for a way to free the mine workers from the rubble, she discovered a damaged robotic mining rig. Improvising, she wrenched off its huge fists and modified them into makeshift hextech gauntlets. Fitting the heavy weapons to her tiny hands, the young girl flexed her arm and threw a powered punch at the rubble. The force of the blow blasted away the rock. With the workers free to escape, Vi fled the scene.

After that job gone wrong, Vi severed her connection to the crew. She returned to a life of solitary crime, but stole only from other criminals. As the years went by, Vi modified and improved her hextech fists, allowing her to bust up heists and snatch loot with ease. Eventually, word of her notoriety reached Caitlyn, the famed Sheriff of Piltover. Rather than seek Vi's arrest, Caitlyn offered the criminal a way to pay her debt to society: work for the law in Piltover. Vi laughed. To her, a job that let her beat up crooks without forcing her to run from the cops sounded perfect. She immediately accepted. Caitlyn now struggles to keep Vi in line, and Vi treats Caitlyn's orders as mere suggestions, but when they work together, they are feared by all lawbreakers in Piltover.

Taunt
Vi spits on the ground.

Taunt while near an enemy

Caitlyn
Vi begins to talk with a bad English accent and conjures a cup of tea, takes a sip, and then throws it to the ground.

While near an allied

Assault and Battery on an enemy

I am happy to announce that our final champion of the year is now (or soon will be) available for testing on the PBE.

Have you ever wished you could punch an enemy with such an impact that you hit the enemies behind it? If your answer is yes, you may enjoy playing Vi.

Have you ever had the desire to wind up a punch powerful enough to carry you across the battlefield, clocking anyone unlucky enough to get in your way? If your answer is yes, you may enjoy playing Vi.

Have you ever wanted to indiscriminately bowl through an enemy team, wiping the smirk off that AD carry's face as you slam it into the ground? If your answer is yes, well, you get the idea.

Vi is all about powerful punches. She's a high mobility high damage bruiser who picks a target, launches herself into the fray, and makes that target deal with her. So what are you waiting for? Go try her out. I'd love to hear your feedback. Best of luck on the Fields of Justice!

There's nothing more satisfying than the sounds of your enemies succumbing to an extreme beat-down. Not to Vi, anyway, the newest champion to join the League. Punching, excessive force, and armor-busting brutality are what she’s all about.

At home in top lane or the jungle, Vi's playstyle revolves around pummeling opponents and tearing into and shattering their armor. Vi's signature punch is Vault Breaker. When you first activate the ability, Vault Breaker begins charging a powerful punch. Activating Vault Breaker a second time causes you to dash forward, dealing damage to units and knocking back enemy champions. Early game, Vi excels at bullying opponents while shoving the lane with Vault Breaker and the AoE damage from Excessive Force. Skillful use of Excessive Force allows you to quickly clear your lane while harassing opponents trying to get in close to last hit minions.

When team fights erupt, Vi's ultimate allows you to charge through your opponents' front-line and crush their carries. Assault and Battery locks on to an enemy champion. You then chase them down, uppercutting them into the air. Enemies unfortunate enough to be in the way are knocked aside. High damage, armor debuffs, and knockbacks make you a disruptive force. Since Vi's attacks and activated abilities apply stacks of Denting Blows, you can increase your damage significantly against armored opponents by just doing what you do best: punching. To top it all off, Vi's Blast Shield helps her survive not only big damage bursts, but also prolonged team fights.

Are you ready to slip on your gauntlets and show off your pummeling prowess? Once your opponents get a glimpse of your heavy weaponry, it's punch or be punched.