The twisting magical energies unleashed by mages during the Rune Wars caused an incredible amount of devastation to the natural world. The League was established to control the use of this magic by confining it to the Fields of Justice. By limiting its use to there, they thought that they could prevent it from doing further harm to the environment. It seemed that they were successful until Maokai came into being. During a League match on The Twisted Treeline, Maokai, an ancient oak that stood above the upper jungle, spontaneously roared to life. Ripped from the natural balance by arcane forces, his sentience was forged in chaos. Before the Adjudicators of the League could step in and suppress him, he slew all six champions participating in the match. The scholars of the Arcanum Majoris took a keen interest in him, as they were eager to discover the secrets of his animation.

Maokai was furious, however. He abhorred the existence that was thrust upon him; he felt it was a corruption of nature. He learned to communicate with people in hopes of finding a way to be returned to his former, true state. Seizing the opportunity, the League offered a trade. They would research a way to revert him so long as he agreed to fight in the League of Legends. Maokai was indifferent to verdicts rendered by the League, but he was eager to punish summoners for their wanton use of magic. He agreed to the terms under one condition: once they learned how to turn him back, they would never animate another tree again. He wears a lantern on the Fields of Justice to set him apart from the other trees, and as a warning to the 「animals」 that would do him harm.

「I will use this power until I am free of it.」
―Maokai

Maokai bounces a sapling on his foot, throws it in the air and eats it. The sapling the comes out of his arm and returns to his hand.

Maokai throws a sapling on the ground and stomps it. 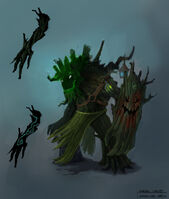 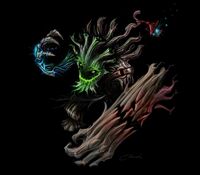 This champion image and release date were leaked from the March 2011 issue of PC Gamer.

Who: A tree hit with magic that became a hero.
He will: Plant acorn bombs, teleport on top of lightly armored enemies.
Release: February 15

Sometimes, when you look at the League of Legends champion lineup, it』s easy to feel like you』ve seen it all. You』ve seen light mages, thorn mages, mad scientists, illusionists, ninjas, and warriors with gigantic swords. But there』s something that this next champion has that none of them do: roots. That』s right, while you may have been engaged in epic, pitched battles with trolls, gargoyles, ogres, scarecrows, minotaurs, mummies, and mutant armadillos, I bet you』ve never had to fight a tree before! Introducing Maokai, the Twisted Treant; a groundbreaking new champion in the League of Legends whose bark may or may not be worse than his bite. You decide.