Piltover is a city-state on the northeastern part of Valoran.

Piltover, also known as the City of Progress, is the leading center of ecologically-minded techmaturgical research on Valoran. The city's great academies and their contributions to science are known across the land, rivaled only by the eccentric colleges found in Zaun. Strangely, the coastal nation is situated atop a relatively small mountain in a vast greenish marsh. The denizens of Piltover appear to be utilizing the liquid and gases emitting from the marsh as viable source of energy in order to power the city.

The individuals who travel to and wish to reside in Piltover have a seemingly unquenchable thirst for knowledge. This pursuit can lead them across a variety of academic fields, be it techmaturgy, medicine, archaeology, etc. The city's researchers clearly take great pleasure exploring and expanding their scientific inquiries. However, many of them have now turned their attention to the current state of conflict on Valoran. Seeing what they consider an unacceptable situation, the scientists and denizens of the City of Progress have come together to work collectively in order to rectify the problems plaguing the continent. They firmly believe that science is the key to saving Runeterra.

Another reason Piltover is referred to as the City of Progress is due to its extraordinarily low crime rate. This hasn't always been the case; brigands and thieves of all sorts used to find the city-state an ideal mark for plunder, primarily due to the valuable resources it imports to fuel its techmaturgical research. Some even theorize that it would have fallen long ago to the chaos of organized crime if not for

Caitlyn, the Sheriff of Piltover. At a young age Caitlyn discovered that she possessed a natural gift for investigation. She also found that she was one of the sharpest shots in the city. Caitlyn gained notoriety as she was singlehandedly defeating crime in Piltover.

Jayce, the Defender of Tomorrow, later became Piltover's Sentinel after he singlehandedly destroyed the lab of the Zaunite scientist,

Though Piltover produces an abundant amount of techmaturgical marvels, the city's denizens strive to be as environmentally friendly as possible. They are constantly developing new and improved methods for renewable energy.

Piltover has a very empathic and progressive governing body. It is indicated that the citizens of Piltover collectively elect their representatives, who are referred to as statesmen. In order to improve the city-state's social and environmental well-being, statesmen constantly strive to implement their nation's rapid scientific innovations.

There is a significant yordle population that resides in Piltover.

Heimerdinger, the Revered Inventor, had an allure to science that he could not resist, and wanted to make his mark on the City of Progress. Before leaving Bandle City he gathered like-minded Yordles to join him in his quest to Piltover, thus forming the backbone of the now famous Yordle Academy of Science & Progress. Since then, his academy has become one of the leading institutions in all of Valoran. It has pioneered many new scientific achievements, delving deeper and deeper into the field of techmaturgy. The more interesting contraptions Heimerdinger and his colleagues have put together are on permanent display at the academy, with tours being granted nearly every day of the week.

Examples of Heimerdinger and his academy's many inventions include:

Desiring a more suitable location to construct his techmaturgical vehicles, Heimerdinger built a new expanded workshop outside his Yordle Academy.[3] The workshop, called Piltover Customs, has gone off to become the most successful transportation customization and modification enterprise on Runeterra.

The co-owner and chief mechanic,

Corki, the Daring Bombardier, enjoys tinkering with all the hextech gizmos that are regularly brought to him. He and the company provides a tour for the shop by special request only.[4]

The Grandmaster Explorer of Piltover[]

A large network of the intricate tunnels can be found underneath the Piltover, and for years they were long thought to be unnavigable. This was until the tunnels were fully mapped out by

Ezreal, the Prodigal Explorer. The quality of his work was so remarkable that the Piltover government purchased his maps and commissioned his services as the city-state's Grandmaster Explorer in archaeology. Since then Ezreal's countless adventures have been romanticized and published by the city. He also occasionally brings back many ancient artifacts he finds to Piltover and to the League for further study.

With the goal of using their combined knowledge to give aid to others as quickly as possible, the city's officials created multiple search and rescue teams that can be mobilized across Valoran at a moment's notice. The teams, referred collectively as the Piltover Patrol, serve to assist anyone in dire need. Each member is highly trained to handle different levels of emergencies. When searching for missing individuals the rescuers deploy the Piltover Rescue Bot, a recent prototype created by the famed inventor

Heimerdinger, to hover over and scan large areas of land. Should an individual be found severely sick or injured, the rescue teams are capable of swiftly transporting them back to Piltover. The individual is then treated as a patient by the city-state's top medical staff and is cared for around the clock.

As the two leading city-states in the development of hextech, Piltover and Zaun have a deep competitive rivalry, both vying to be the ones directing the future of techmaturgy on Runeterra. League matches between the two nations have a tendency to begin with their champions exchanging contemptuous banter and moody glares.[5]

Though Piltover and Demacia may have their differences at times and fight them out on the Field of Justice, the two city-states are on relatively friendly terms. Scientists from the City of Progress are usually welcomed inside Demacia. However, should the scientists wish to perform experiments there, they must first get clearance from Demacian officials.

The Piltover Patrol found a young inventor from Piltover who was previously reported missing for the last three months. Piltover officials mobilized all available rescue teams to recover the well-known 14-year-old prodigy of techmaturgy. He was discovered afflicted with a withering disease and close to death in the northern jungles of Kumungu. The rescue team quickly transported the boy back to the city-state, and he was quarantined to prevent spreading the disease. The medical staff raced to save his life, though a source within the Patrol described the boy's status as worrisome. The source explained that the strange disease was ravaging the boy's body, and even with the advanced state of Piltover's medical care, the disease was spreading too quickly for his young body to cope with. His name was withheld because he was a minor.

The Festival of Flight[]

Tensions between Piltover and Zaun renewed as the 16th Festival of Flight race drew near, marking the beginning of the annual Techmaturgical Conference. The city of Zaun had been named victor of the symbolic event for the last four years running, though they showed a great deal of trepidation towards the upcoming match after Piltover publicly unveiled their new state-of-the-art zeppelin.

While it's difficult to classify any dirigible as small, the appropriately named “Tailwind” aircraft was a record-breaking length of 27 meters. Not only was it the first zeppelin to meet such small size constraints, but it also pioneered the utilization of Piltoverian Chrono-Technology. The new prototype “Chrono-propeller” engine, which received tremendous design contributions from fellow League Champion

Zilean, the Chronokeeper, was rumored to manipulate time itself to reach speeds that would otherwise be impossible under Valoran’s constantly changing atmospheric conditions. The zeppelin would be piloted in the race by

Janna, the Storm's Fury, who was once one of Zaun’s most promising mage talents before defecting from the city-state several years ago.[6]

Janna’s record-breaking zeppelin "Tailwind" defeated the Zaunite flagship "Lead Zeppelin" at the annual Techmaturgical Conference in Piltover. Zaun's "Lead Zeppelin" had maintained a strong lead from the race’s start in Piltover. The Zaunite flagship, a powerhouse of black metal and Zaunite techmaturgy, had claimed victory at the Conference for the past four years. As the two zeppelins crossed the Bluewind Bay, however, Tailwind’s chrono-propeller engine allowed the craft to navigate through the bay's storms utterly unfettered, securing Piltover’s victory.

Ziggs, the Hexplosives Expert, accidentally blew up the wall of the Academy, Zaunite agents infiltrated Piltover and kidnapped the yordles. The Piltover military tracked the hostages to a Zaunite prison. They tried to break them free but to no avail, their weapons proved useless against their fortified walls.

Ziggs then came to the scene with his new and improved bombs he lovingly calls "hexplosives". Ziggs used his most powerful bomb, the Mega Inferno Bomb, to destroy the reinforced walls. Once the smoke diminished he lashed out at the guards with an array of unique hexplosives, broke the yordles' cell and led them back to Piltover.

The Defender of Tomorrow[]

A friendly visit from the Zaunite scientist,

Viktor, the Machine Herald, quickly turned into an all-out assault of

Jayce's lab in a successful attempt at stealing the arcane crystal. Piltover officials refused to attack Zaun to prevent the thievery from escalating into an all-out war between the two city-states. With no response from the officials, Jayce chose to seclude himself inside his lab. Rumors of a powerful weapon is being developed for an assault against the Zaunite scientist.

After many restless day and nights, Jayce finally made himself public again, carrying with him the supposedly rumored weapon, the Mercury Hammer. With this, Jayce assualted Viktor's lab, defeated him and his acolytes and destroyed the crystal. On his return, the citizens of Piltover showered him with adoration. But with his actions he knew that Zaun would soon act again and try to wreak havoc in Piltover. So he made a solemn vow to defend all of Piltover from any danger that comes. 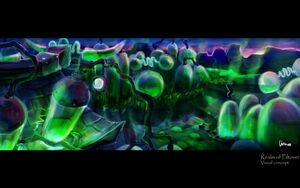