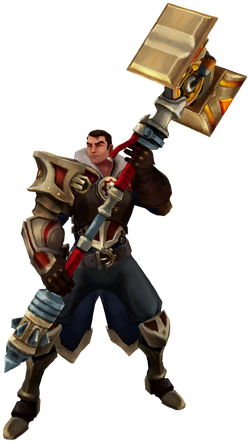 Armed with wit, charm, and his signature transforming hammer, Jayce lives to protect his native Piltover. Long before his nation called him a hero, however, he was a promising young inventor. When Piltover commissioned him to study a rare arcane crystal, Jayce discovered it could be used as a vast energy source. Eager to make a name for himself, he began developing a device to harness its power. Word of the crystal's potential reached beyond the borders of Piltover.

Viktor, the machine-augmented scientist from Zaun, brought Jayce an offer – together, they could use the crystal to advance his "glorious evolution," a vision of humanity fused with technology. Jayce refused, but the Zaunite had no intention of leaving empty handed. He effortlessly blasted Jayce aside and seized the crystal, incinerating the lab's meager security force as he left for Zaun. Jayce implored the Piltover government to respond, but the officials refused to support an act of aggression. He decided to act alone, realizing that if no one struck back, Piltover would never be safe.

Jayce returned to the lab to prepare for his attack. After intense research, development, and hands-on testing, he emerged with his crowning achievement –the Mercury Hammer. Weapon in hand, Jayce marched to Zaun and began his one-man assault. Viktor's acolytes rushed to stop him, but Jayce smashed them aside, fighting his way into the heart of the lab. Inside, Jayce saw the horrifying brilliance of Viktor's creations, all powered by the energy of the arcane crystal. He realized that his only option was to destroy the power source, but Viktor stood in his way. Though their clash left both scientists heavily wounded, Jayce managed a desperate strike at the crystal. He shattered it and escaped as Viktor's machines erupted in flames. When he returned home, exhausted but victorious, the citizens of Piltover hailed Jayce as a hero. He reveled in the adoration, but knew that his actions had drawn the attention of dangerous enemies. Now devoted to the defense of his people, Jayce is Piltover's best hope for a bright future.

Jayce prepares to fire his cannon, but shoots out confetti instead.

Jayce heroically leaps into the air and lands with force.

When units die from an enhanced

If you've been waiting for the League to acquire a Renaissance man, then your long wait is over. Meet Jayce, the Defender of Tomorrow. In addition to being a class act and charmer, this modern gentleman is one of Piltover's premier scientific geniuses.

This brazen, well-equipped man for all seasons sports hi-tech armor and wields the skull-crushing Mercury Hammer that also transforms into the Mercury Cannon. Whether you want to get up close and personal to punish enemies with a gigantic blunt instrument or shake things up by peppering opponents with energy blasts from a distance, Jayce has the skills it takes to deliver.

Jayce, the Defender of Tomorrow Revealed[]

If you're ready to add a little versatility to your fighter or ranged carry game, look no further than Jayce, the Defender of Tomorrow. Jayce's transforming weapon allows him to adapt to nearly any situation, making him an extremely versatile champion for whatever role you need filled on the Fields of Justice.

The lynchpin in Jayce's kit is his ultimate. Starting with a free rank at level 1, Jayce can activate his ultimate to transform his weapon into either the short range Mercury Hammer or the long range Mercury Cannon. Each time he transitions he'll receive a bonus effect on his next basic attack that either shreds the target's defensive stats (ranged mode) or deals significantly increased damage (melee mode).

Selecting the right weapon type for your current engagement is the key to playing Jayce effectively. While ranged, Jayce can pepper enemies with ranged attacks, deploying Shock Blast and Hypercharge to wear down opponents while utilizing Acceleration Gate to Keep his team at a safe distance. Having worn an enemy down in this manner, Acceleration Gate can be repurposed to give chase, allowing him to shift his weapon into its hammer form and leap into the fray with To the Skies!

Once he's closed the distance, he can utilize Thundering Blow to pick up a quick kill, while the additional armor from being in melee mode gives him the toughness necessary to either withdraw or continue fighting at close range. However you choose to play Jayce, canny shifting between his weapon modes will make or break your success on the battlefield.

Armed with wit, charm, and his signature transforming hammer, Jayce lives to protect his native Piltover. He rose to prominence as an inventor, one whose magnetic personality and innovative creations brightened the lives of his nation's people. However, his technological marvels also attracted the attention of Piltover's enemies.

Viktor, the machine-augmented scientist from Zaun, staged a deadly raid on Jayce's laboratory, barely impeded by the lab's meager security force. Viktor stole designs for an arcane power converter. Jayce feared that Viktor would create weapons of devastating power with the stolen technology. He implored the Piltover government to respond, but the officials were unwilling to support an act of aggression. Refusing to allow his own inventions to threaten the people of Piltover, Jayce decided to strike back against Viktor himself.

Jayce returned to his laboratory and began making preparations for his one-man attack. After an intense period of research, development, and hands-on testing, he emerged. He had created an array of powerful armaments, including his crowning achievement – the versatile, transforming Mercury Hammer. Armed and ready, Jayce began his assault, easily smashing aside Viktor's acolytes as they rushed to stop him. Jayce fought his way into the heart of the lab and confronted Viktor, forcing the Zaunite to flee. After destroying Viktor's prototype weapon, Jayce returned to Piltover where he was hailed as a hero. He reveled in the adoration, but he knew that his actions had provoked the nation's enemies. Now devoted to the defense of his people, Jayce is Piltover's best hope for a bright future.