创建Wiki
Jungling is the act of killing neutral monsters in the jungle. It is a player who likes to remain out of sight, grab all the good stuff, and choose their attacks carefully. This page refers specifically to the jungler role for teams competing on Summoner's Rift. The jungle itself refers to any area of the map that is not a lane or part of either team's base. Due to the wealth of gold and experience that can be accessed by slaying neutral (unaligned; loyal to neither team) monsters that remain (camp) in predetermined locations on the map, many players specialize in remaining in the jungle and doing so - leaving two solo lanes to each gain high experience and gold. In effect, all of the accessible resources are being utilized by a team with a Jungler. There are many other benefits and strategies which will be explained in this article.

Lane resources are distributed to fewer players while the jungle resources are being utilized. This will net an increase gold and experience per player in contrast to having all five champions lane instead.

There is also an increased gank capability as enemy champions cannot see the jungler through the fog of war. The jungler can ambush them and attempt to slay them by outnumbering them. Well-contested lanes may even have counter-ganks on top of normal ganks, where the enemy being ganked is then joined by his/her jungler to catch the original ganking champions off-guard and slay them instead. Ganking is not unique to the jungler, but a crucial aspect to their team role.

Seasoned junglers will find themselves beckoning teammates into the jungle to share the spoils of war. Quite often, a jungler will alert the most mana-hungry teammate to claim the Crest of the Ancient Golem Crest of the Ancient Golem for its potent mana regeneration and large boost to cooldown reduction. The jungler can weaken the 20px Ancient Golem to a near-death amount of health and allow this beneficiary to simply deal the killing blow and pick up the buff.

Certain junglers in particular are capable of tackling large, powerful neutral boss monsters alone, with the risk of being interrupted by the enemy. These boss soloers can net an enormous advantage for their teams. Candidates for a boss solo jungler are prepared with either high single-target damage, the ability to sustain themselves against a single target, or both. Even champions good at this specialized jungle role should be accompanied by teammates so as to greatly reduce the risk of being assassinated in the boss' nest and/or having the boss kill stolen from them by the enemy team.

The Utility and Prevalence of

Smite is a common summoner's spell used by junglers. The reason are listed below: 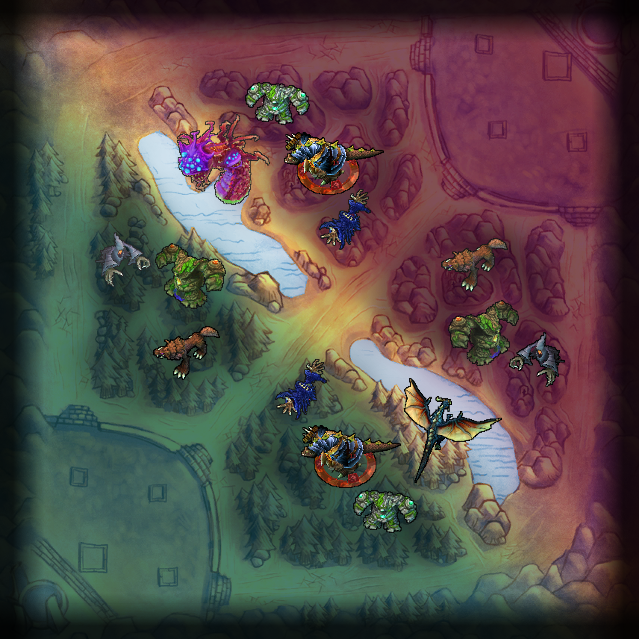 Each team has its own jungle - an equal area with the same amount of non-boss monsters. The entire path is mirrored across the center of the map, except two bosses, which are unique.

Baron Nashor are unique boss monsters along the river. The designated areas for 20px Dragon and

Rewards increase for every minute each camp is left unslain.

Players seeking a good champion for the jungler role should search for a few key capabilities of the champion:

Runes are an important and intricate part of the jungler. There are a few common rune used to increase jungler's potential:

Most Common starting item setups for Jungling are:

Cloth Armor can be built in

Madred's Razors and then into

This setup is for more sustained junglers. It provides movement speed to clear and gank faster as well as 450 health to get through the first few levels.

Vampiric Scepter from the start cheapens the cost of a

Wriggle's Lantern as no gold is spent on

Purpose: This strategy is usually used in attempt to acquire an early kill, netting 680 Gold (400G for the kill + 70% for the Assist) for your team and setting the slain opponent back on both experience and gold.

Purpose: Collect gold and experience from the jungle with little dependent on how the enemy team reacts. This is usually done with champions with low ganking potential or champions that requires high levels to effectively gank a lane.

Purpose: This route is the most common as it provides enough experience for the jungle to reach level 3 or 4 before ganking. It is a well-rounded route for both ganking potential and farming experience and gold in the jungle.

Leashing or Pulling is the process of a champion (the non-jungler) holding/provoking the aggression of a neutral monster for a period of time. Leashing gives the jungler some time to deal damage without facing retaliation.

There are a few types of leashing methods:

Here is a clip showing how this method is done: The Superman Leash (YouTube video)

If all of the monsters in a camp die, the timer for the camp to respawn begins, but if any of the neutral monsters are left alive the respawn timer will not begin. Use this to rob the enemy jungler of precious gold and experience.