Freljord is a tundra city-state on the northern part of Valoran.

Freljord is an unforgiving place. A mountainous land covered in snow and ice, it is home to many vicious ice storms. Travel, especially in the winter, can be very dangerous. The elements often claim even those who have spent their entire lives there. Only one storm exceeds the ones found in Freljord: the Gelid Vortex - a swirling, icy maelstrom which circles the northern hemisphere of Runeterra.

There are 5 currently known areas of Freljord. Rakelstake, once a village where the Tribe of the Ice Dervish lived now serves as the capital of Freljord. The Gelid Vortex, a powerful maelstrom located north of Freljord, surrounded by mountains. The Ursine Village, found just below the Gelid Vortex's mountains. Ironspike Mountains, a mountain range that surrounds Freljord. It is also the location where

Anivia has made her home. The Avarosa Iceflow Glacier, somewhere beside the Gelid Vortex in the Ironspike Mountains.

The Freljordians were once a divided people with "The War of the Three Sisters" having left the denizens splintered for generations. The region was divided and dominated between three nomad tribes: The Tribe of the Frost Archer, The Tribe of the Ice Dervish and The Tribe of the Winter's Claw. Over the years the tribes would have occasional skirmishes with one another, though the reasons for why they continued fighting had been long forgotten by most. The tribes were reigned by the three Princesses:

Ashe, the Frost Archer; Lissandra, the Ice Dervish; and

In more recent times, with the crowning of their new

King, the Freljordians have started the process of mending the bonds between their fractured tribes. Sentient creatures that were once marginalized and secluded, such as the Yetis and the Ursines, were now given a voice in city-state's government. In addition, through the alliance established by their foreign King, the barbarian tribes of northern Valoran have migrated to Freljord and have begun integrating their own traditions into the Freljordian society.

There is a city known as Rakelstake in Freljord, which was inhabited by the Tribe of the Ice Dervish.[1] It is believed that the city now serves as the capital for the united city-state.

In light of the protections that the League has extended to Freljord - and consequently to the barbarians - Noxus issued a "stand down" order to troops dispatched to their Northern Barbarian Pacification Campaign.

Katarina, the Sinister Blade, delivered the command herself. She stated that Noxus abides by the rules of the League, but that her people would not forget the offenses perpetrated by the barbarians.

Demacia and the people that now make up Freljord have had a history of conflict, albeit nowhere near as grievous as the conflict between Noxus and the northern barbarian tribes. Both

Tryndamere have been highly critical of Demacia’s neutrality during Noxus’ Barbarian Pacification Campaigns. In fact, Demacia had been quite protective of its territory, turning away refugees during the campaign’s more bloody episodes. Likewise, Demacia’s northern homesteads were often times targeted by barbarian raiding parties. Both city-states have a great deal of diplomatic work ahead of them before they can bridge the gap that spans decades of distrust.

Battle on the Tundra[]

Ashe, the Frost Archer, was leading a squadron of elite archers, her closest companions, when they found themselves caught in a wintery nightmare at the end of a week-long standoff with a warring tribe. When she came to, Ashe was surrounded by the tattered corpses of friends and enemies alike. Only divine providence had spared her from the whirling shards of ice, and her hair had turned the color of the arctic tundra. After that day Ashe never again wore the traditional Freljord White Garments of Victory.[2]

Nunu was a young child, he rode on his father's back as they returned from a trapping expedition in the mountains. An unexpected blizzard came upon them, forcing them to seek refuge in a cave. The tempest was the worst in countless years, and it lasted for days. Nunu's father left to find food, but he never returned.

The blizzard eventually cleared, and the young child lay dying on the mountainside. Fortunately for Nunu, this was the land of the yetis, who are powerful beasts with whom Nunu's father had secured an arrangement for safe passage. A young yeti boy named Willump found Nunu and brought him home. From then on Nunu was raised by the yetis, whose culture was a mystery to most Runeterrans. The boy quickly discovered that the seemingly savage creatures were in fact deeply spiritual beings living in harmony with their environment. They are very territorial and unafraid of defending themselves if called upon to do so. The yetis have watched the rest of Valoran, and they can smell the change on the wind. When the League of Legends was formed, the yetis knew they needed a champion. Riding his brother Willump, Nunu became that champion.

A summoned creature from a far off world,

Anivia, has taken residence in the Ironspike Mountains, adjacent to the frozen wastes of Freljord. She has claimed the mountain range as her nest. Although often viewed as unapproachable, she has formed a strong friendship with the young champion,

Nunu, and his yeti friend, Willump. While traveling through the mountain range,

Princess Ashe came across Anivia and they too formed a close bond.

Alliance with the Ice Dervish[]

One of the rulers of the three tribes that controlled the region - Princess Mauvole, the Ice Dervish – was found dead in her quarters in the city of Rakelstake. The elders of her tribe determined the cause of death to be natural, which cleared the way for the new Princess, Lissandra, to claim her throne and the title of Ice Dervish. In Princess Lissandra’s first act after her coronation, she stunned her new subjects as she swore fealty to another of the three Princesses of Freljord:

Ashe, the Frost Archer. In her coronation speech, Lissandra pleaded with her people that the time had come to unite Freljord under a single banner. Lissandra’s words swayed her kin: her coronation speech was warmly received by her tribe, and her tribe’s elders signaled their solidarity with their Princesses’ desire for unification. However, the third of the Freljord Princesses –

Sejuani, the Winter's Wrath – remained fiercely adamant in her opposition of the other two. Sejuani retreated to isolation with the elders of her tribe. This caused concern among the members of the other tribes, who believed she may be readying for war.

Alliance with the Northern Barbarians[]

As weeks passed, the modest population of Freljord were shocked as hundreds of barbarians - including

Tryndamere, the Barbarian King - arrived to pay their respect to the late Princess Mauvole of the Ice Dervish tribe. Ashe was present for the barbarian procession, and she met afterward with Tryndamere and Lissandra for a private dinner. The arrival of the barbarians, some predicted, was due to an invitation from Ashe to Tryndamere in order to deter Princess Sejuani from taking any aggressive action. It later became clear that Tryndamere's visit was not entirely a selfless venture, but for the negotiation of a mutually beneficial opportunity. After weeks of meetings and discussion, Ashe accepted Tryndamere's offer to join forces with the barbarians. Her decision was met with resounding support by the members of the Frost Archer and the Ice Dervish tribes.

After examining the turn of events within Freljord, High Councilor Vessaria Kolminye made a proclamation from the Luminary Cloister of the Institute of War, granting sovereignty to Freljord and conferring upon it all the rights and protections afforded to city-states. With its newfound status, Freljord was allotted one League Assembly chair. Their chosen Emissary was entitled to reside at the Institute of War and cast votes in League Assemblies on Freljord’s behalf. Freljord may also appeal to the League for general arbitration of political affairs.

While Freljord had applied for membership in the past, its previous appeal was denied on the grounds that its population was insufficient, and it lacked both a defined governmental structure and the means to police itself.

Ashe's recent ordainment as leader of Freljord's two united tribes, bolstered by the might and numbers of Tryndamere's barbarians, was enough to sway the opinion of the Council of Equity.

The New Queen and King are Crowned[]

Ashe the Queen of Freljord. Ashe was the first princess to ascend to the throne since the Three Sisters War divided their people. According to Freljordian tradition, the Queen selects the King to rule by her side. Ashe selected

Tryndamere, solidifying her arrangement with the barbarian tribes. On the topic of her choice, Ashe stated that her actions are guided by the needs of her people, not by romantic notions The union was a pledge to reinforce their commitment to the alliance. Ashe also appointed League Champion

Nunu, the Yeti Rider, as Freljord's League Emissary, stating that the yetis will for now on be a part of their new society.

Princess Sejuani a seat on Freljord’s new Royal Advisory Council. Sejuani emerged from her reclusion to respond, stating that she would never accept Ashe as her Queen, and that anyone who does so was contributing to the perversion of their culture. However, her opinion was not echoed by her people, as hundreds of Winter’s Claw tribesmen journeyed to Rakelstake to attend Ashe’s coronation. There, Nunu accepted his appointment proudly, and the largest contingent of yetis ever witnessed by humans were present for the celebration. Hordes of barbarians also migrated to their new home, many arriving to view the second crowning of their King. Tryndamere welcomed his people with an inspiring declaration, stating that they finally have a voice in Valoran, and could now be seen as they truly are: proud and noble warriors.

Gragas, the Rabble Rouser, made a journey to the Avarosa Iceflow, Freljord’s Northern-most glacier, in search of the purest waters in all of Runeterra. The League champion arrived to Freljord to stake his claim to the arid ice field. Meeting with

Queen Ashe, the Rabble Rouser impressed upon his hosts the significance of this locale to his brewing art, imploring them to entrust it into his custody. Seizing the opportunity to capitalize on the development of an otherwise treacherous territory, the monarchs happily obliged.

Gragas signed an agreement to lease the Avarosa Iceflow from Freljord for an astonishing 9,000 years, ensuring that the cherished water supply will be his for the brewing long into the future. His dealings with the monarchs were then concluded appropriately and according to tradition: with a drink. Atop the wellspring, Gragas constructed the first large scale brewing operation for his most famous libation: the legendary Graggy Ice.

Alliance with the Ursine[]

After the death of the previous Ursine chieftain,

Volibear, brother of the late chieftain, ascended to take his brother's place as leader of the tribe. Although the tribe accepted him however, by Ursine tradition, they could not fully recognize him as their leader until he climbed the top of their sacred mountain and spoke to the great maelstrom. Once Volibear reached the top, the Gelid Vortex showed him a vision of the destruction of Freljord, with his people lay dead upon the blood-red snow.

Volibear believed that if the Ursine did not unite with the humans, they would surely perish. He traveled to the south to Rakelstake, the new capital of Freljord. The Ursine had not ventured across the southern mountains in centuries and his appearance was met with unease, but

Queen Ashe recognized Volibear as a wise and powerful ally. In what Volibear considered the first step against a war-torn future, they forged an alliance. 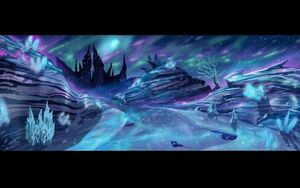