Heimerdinger and his yordle colleagues migrated to Piltover, they embraced science as a way of life, and they immediately made several groundbreaking contributions to the techmaturgical community. What yordles lack in stature, they make up for with industriousness. Corki, the Daring Bombardier, gained his title by test-piloting one of these contributions - the original design for the Reconnaissance Operations Front-Line Copter, an aerial assault vehicle which has become the backbone of the Bandle City Expeditionary Force (BCEF). Together with his squadron - the Screaming Yipsnakes - Corki soars over Valoran, surveying the landscape and conducting aerial acrobatics for the benefit of onlookers below.

Corki is the most renowned of the Screaming Yipsnakes for remaining cool under fire and exhibiting bravery to the point of madness. Before the League, he served several tours of duty, often volunteering for missions which would take him behind enemy lines, either gathering intelligence or delivering messages through hot zones. He thrived on danger, and enjoyed nothing more than a good dogfight in the morning. More than just an ace pilot, Corki also made several modifications to his copter, outfitting it with an arsenal of weapons which some speculate were more for show than functionality. When open hostilities ceased as part of the agreement surrounding the formation of the League, Corki was forced into a retirement which he felt "cut the engines and clipped the wings". He tried to make do with stunt flying and canyon running, but it was never the same without the refreshing smell of gunpowder streaking through the air around him. When Heimerdinger joined the League of Legends, it was no surprise to see Corki follow soon after, eager to test his mettle against the best the world has to offer.

Fresh from rigorous testing under the watchful eyes of industry super genius Fedasz Lehman, we are proud to unveil the latest and greatest creation from G.A.N.K. Industries.

Rolling off the production line, this sleek skin unites efficient German spatula design with a heavy weapons platform; riding a sea cow into battle is no longer just a beautiful dream! G.A.N.K. Industries have prepared the following presentation* open your eye holes and fill them with fun.

Since the dawn of time man has sought liberty from the tyranny of legwork; first the noble horse, then the automobile, and now the majestic manatee. Slip the surly bonds of earth to ride the Urf! 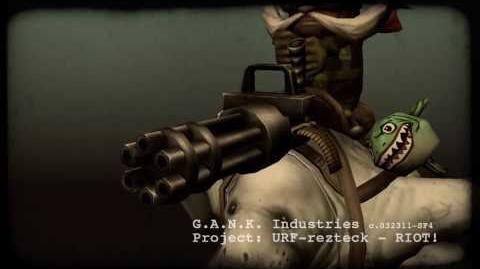