In a faraway place known as Lokfar there was a seafaring marauder called Kegan Rodhe. As was his people’s way, Kegan sailed far and wide with his fellows, stealing treasures from those unlucky enough to catch their attention. To some, he was a monster; to others, just a man. One night, as they sailed through the arctic waters, strange lights danced over the frozen wastes. There was something hypnotic about them; it was something that drew them to it like moths to a flame. Trekking across the frozen waste, they came to a cave covered in ancient runes. Though the meaning of the runes was long lost to them, Kegan led the way inside. Inside a perfect cage of ice floated a dancing column of flame. There was no way such a thing should be burning, especially not in this place. However, its movement was as hypnotic as a siren's song, captivating and seductive. While the others stayed back, Kegan could not help but approach it while holding out his hand...

That is the last thing Kegan Rodhe remembers, for now his body belongs to Brand. It is a creature of olden times--perhaps even a casualty of the Rune Wars. It is known in ancient texts as the Burning Vengeance. It is a creature of pure fiery hate that exists for no other reason than to lay low the world of men and yordles. No one is quite sure how Brand found his way to Valoran, but he began his predations at once. Overcome by Demacian forces, he was given a choice: fight within the confines of the League or die. Naturally, he chose to use his destructive powers in the League, for now...

"This place will burn, not by cinder flying on breath of wind, but by the vengeance of my hand."
― 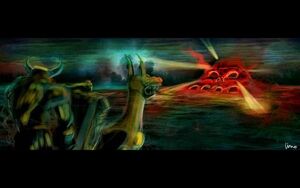 Announcement made by ByronicHero on 4th April 2011:[1]

Here at Riot Games, we’ve been positively burning with anticipation to tell you about this next champion. And that’s not just smoke and mirrors! If you’ve ever come under fire from critics for leaving a candle unattended, forgetting to turn the grill off, or an over-enthusiasm for fireworks displays, he’s sure to spark your interest. Start getting fired up for Brand, the Burning Vengeance. He’s a real spitfire who is sure to attract all you combustion connoisseurs out there like a moth to a flame.

Hey, did we mention that he’s on fire?