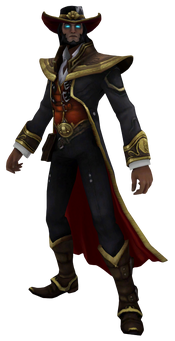 Although born to poor gypsy parents, the champion known as Twisted Fate was able to gamble his way to prosperity as a card shark in the seedy underground gambling circuits of Demacia and Noxus. No matter how close the authorities came to catching him, the rogue always found a way to slip through their fingers. Despite his good fortune, he was never able to win that which he truly desired - the ability to control magic. When Twisted Fate learned of an experiment being conducted in Zaun that might help him with his wish, he did the only thing a gambler of his worth could do - he went all in and volunteered for the experiment.

Conducted by the infamous Dr. Xavier Rath, Twisted Fate was told that the wager for such participation might be steep. He might change forever, or nothing might happen, or he might die horribly. Pain, however, was likely a part of the deal no matter the outcome. These were hardly the worst odds the gambler had faced; his hopes raised, Twisted Fate underwent the experiment, enduring what he must for a chance at his dream. Then, it ended - with seemingly no effect whatsoever. The gypsy rogue flew into a murderous rage, but, before he could strike down the team, he suddenly teleported himself miles away. With a sly grin, he realized his luck had won out yet again. He now brings his luck and rakish charm to the Institute of War, where he is the champion of choice for many - especially the gambling kind. To this day, Twisted Fate has avoided his inevitable reunion with Dr. Rath. The Card Master knows, however, that a confrontation is coming.

"While the future may be mysterious and unknown to most, Twisted Fate is certain that his future lies within the cards."

Card sharks everywhere will be excited to know that Twisted Fate is receiving a visual upgrade in the upcoming patch. The Card Master is a classic champion that remains one of the most popular around the world. Fate has smiled upon everyone's favorite gambler – he's getting a new model as well as revamped textures, sound effects, spell effects, and voice over. Each one of Twisted Fate's skins is being adapted to his higher quality model, so you'll see upgrades across the board. He's also got some sexy new moves inspired by the latest dance craze.