-To be added upon release-

Nami summons three colorful sharks which swim around her, and makes them jump.

Nami taunts her foe and splashes them with water. 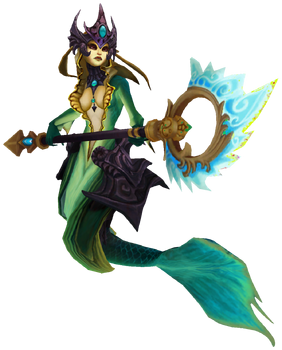 Announcement made by Morello:[1]

As I’ve been hinting at for a little while now, the next champion is our new support character. While we’ll get to the details on her in the next few days, I wanted to pull back the curtain on what “support champion” means when we set out to create one.

First up, let’s discuss the differences between support characters, and the lane assignment of support – they overlap a lot, but they’re not the same:

So, with that out of the way: when we talk about a support character (like Nami – the new one!) we mean the first definition.

Zyra, while able to play the support role, is not a support champion by these definitions – she’s more like a mage with an off-spec.

So, why should you care about Nami? Let me tell you!

We’ve learned a lot of lessons from our supports, and think Nami shows how we can make a character who satisfies the core support psychology, and is healthy for the game. And with our commitment to developing a variety of champions, you’ll be seeing more supports coming next year – so this is far from the last example of that.

Look for more exact details, including skills and more art, in the upcoming days – and you will be able to check out Nami on the Public Beta Realm soon, too.

The newest support champion to join the League is Nami, the Tidecaller. A water caster who channels the primal energies of the ocean, Nami harnesses water's restorative properties and commands the raw power of the tides themselves.

As a support with powerful crowd control abilities, Nami's kit gives her the potential to impact every phase of your games. In lane, Nami excels at applying constant pressure to the enemy. The buffs provided by Tidecaller's Blessing allow her lane partner to come out ahead in exchanges, and the long-distance stun from Aqua Prison can keep low health enemies from engaging safely. Moreover, because her healing skill also bounces to damage nearby enemies, Nami's core support abilities work best when her partner is on the attack.

In the mid game, when teamfights become more frequent, the utility of Ebb and Flow increases. The more champions the wave can bounce to, the more efficient it becomes. You can use Aqua Prison and Tidal Wave to disrupt opponents' positioning with stuns and slows, and take advantage of her passive combined with Tidecaller's Blessing to help chase down a fleeing enemy champion.

With her potent combination of crowd control and buffs, Nami continues to have a substantial presence in team fights once the transition is made to the late game. Even though she's not on the front lines dishing out damage, Nami becomes a fantastic initiator through the range of her ultimate. The enormous distance covered by the rushing Tidal Wave can easily force a teamfight, or allow her team to disengage while their opponents are slowed under the weight of the tide.

Balancing her offensive capabilities and defensive utility will be crucial to success with Nami. Learn to ride the rolling wave, and you may find your team swimming to victory.