There are few dwellers, let alone champions, residing in the blasted and dangerous lands that lie south of the Great Barrier. Much of that world still bears the scars of past Rune Wars, especially the mysterious Kumungu Jungle. There are long-forgotten treasures in these strange places which many risk life and limb to acquire. The champion known as Nidalee was only a young girl traveling with her treasure-seeking parents when they lost their way in the dense, rainy jungles. The jungle was unforgiving, and she watched her parents suffer agonizing final days as they fell victim to a mysterious and vicious disease.

As improbable as it was for a child to survive in the inhospitable jungle by herself, she did just that. Her youthful innocence and a fortunate naivete caused her to appeal to the beasts of that place and she was taken in by a family of cougars and raised as one of their own. She grew and somehow absorbed the raw magic of the dense wilds, evolving beyond both her human physiology and her feline affectation. On one pivotal day in her life, standing over the torn remnants of a Noxian squad of woodcutters, Nidalee chose to rejoin the so-called civilized world, to fight in the League of Legends so as to protect the vast woods from both Demacia and Noxus.

"Nidalee was taught to fight by her feline family, battling viciously with tooth and nail. Something in her feline ways may draw you to her, but remember that she is no pussycat."

The Champion was released on December 17, 2009 a day later than it was announced. The Champion information was confirmed on Shacknews[1] by Riot Games. 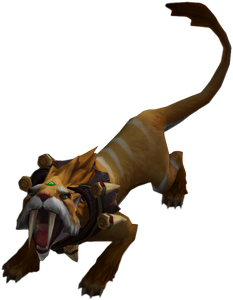 Many of you have been asking for a new look for Nidalee. We're pleased to announce that we've heard you, and that you can expect a complete Visual Upgrade for the Bestial Huntress in an upcoming patch.

In addition to a new model for both lady and cougar, this update includes new animations and spell effects across both of her forms. We'll also be upgrading the model and splash art for all of Nidalee's skins, so you can enjoy the latest fashion, whether you’re a French Maid or a Pharaoh.

The next time you feel the need to go swiftly slinking through the brush, ready to pounce on an unsuspecting foe, do so knowing you look stunningly stylish. 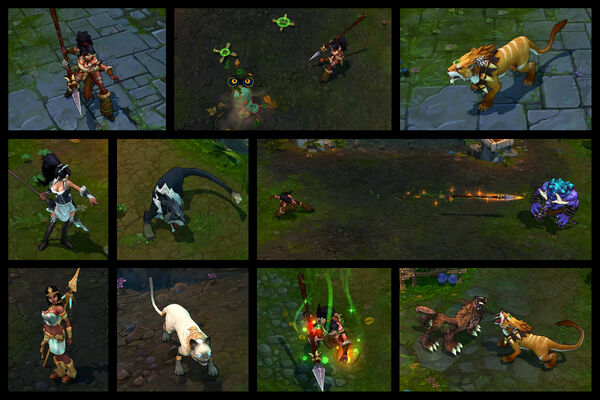