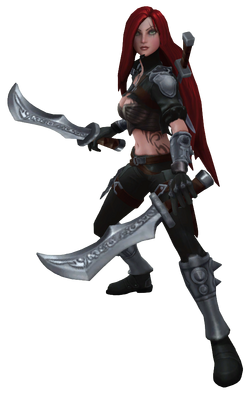 Driven by an intense killer instinct, Katarina uses her talents as an assassin for the glory of Noxus, and the continued elevation of her family. While her fervor drives her to ever-greater feats, it can sometimes lead her astray.

From childhood, Katarina displayed a natural gift for combat. As the daughter of a prominent Noxian general many paths were open to her, but she rejected them all for the path of the blade. Rigorously trained by the finest assassins in Noxus, her father the best among them, it was not long before Katarina demanded her first assignment. The task they gave her was aggravatingly simple: assassinate a low-ranking Demacian officer. As she set to her work infiltrating the enemy camp, Katarina discovered an opportunity too tantalizing to pass by – the arrival of a Demacian General. Stalking him to his tent, she quietly dispatched his guards and slit his throat. Pleased with her impressive kill, she disappeared into the night. Katarina’s elation faded the next day when her original objective, the Demacian officer, led his forces to ambush unprepared Noxian soldiers. Though the Noxians fought valiantly, they suffered heavy casualties. Furious at her mistake, Katarina set off to complete her original task. Returning to the camp, she spied her now heavily guarded target and realized a stealthy kill was no longer possible. Drawing her blades, Katarina swore the officer would die, no matter the cost. She leapt into battle, unleashing a whirlwind of steel. One by one blades flashed and guards fell, each strike bringing her one step closer to the officer. A final thrown dagger restored her honor. Bloody and bruised, Katarina barely escaped the Demacian forces, and returned to Noxus a changed woman. The scar she earned that night now serves as a constant reminder that she must never let passion interfere with duty.

"Never question my loyalty. You will never know what I endure for it."
―Katarina

This patch, we’ll be overhauling one of our classic champions: Katarina, the Sinister Blade. Although Katarina’s manaless, cooldown-based abilities put a unique spin on her gameplay, she’s historically faced a number of challenges in the very early game and in team fight situations. In this update, we’ve made a few changes to her kit aimed at addressing these difficulties, while retaining the core elements that make playing this Noxian femme fatale a fun and satisfying experience. We also gave her a complete visual upgrade, including a new model, animations and spell effects on all of her abilities!

The first problem that Katarina players often faced was weak performance very early on, primarily related to the steep damage curve of her core damage ability, Bouncing Blades. While Bouncing Blades scales dramatically as it levels up, early on it ricochets only a few times, dealing relatively low damage. This forces Katarina players to play conservatively early in the laning phase, encouraging passive play until Bouncing Blades can be used to harass effectively.

To address this disparity, we normalized the damage inflicted by Bouncing Blades and made it bounce the same number of times at every level of the skill. In addition, each ricochet will now select the nearest available target instead of bouncing randomly. This change should both facilitate interesting counter-play for opponents and open up new harassment opportunities for advanced Katarina players who are able to predict where their daggers are going to bounce.

In addition to her early game difficulties, Katarina’s reliance on the massive damage potential of Death Lotus has always made her a challenging champion to balance. A fully channeled ultimate could quickly reduce a team to ashes, but a well-timed interrupt from a canny defender could quickly transform Katarina from a maelstrom of death into an easy kill. For this reason, we decided to move the healing debuff from Killer Instincts onto Death Lotus and decrease the channel time slightly. This reigned in the overall damage numbers slightly, replacing some of this raw punishment with a bit of utility gave us the opportunity to make remainder of Katarina’s kit more dangerous.

To accomplish this, we swapped Killer Instincts for a spammable, area-of-effect attack that grants Katarina a brief speed boost when it lands. This new ability, dubbed Sinister Steel, gives Katarina superior mobility and allows her to continue laying down damage on multiple targets during a team fight if Death Lotus is interrupted by a stun or knockback. For a little added kick, Bouncing Blades will now apply a debuff that is consumed to deal bonus damage when Katarina strikes the target with an attack or ability. These changes should give Katarina the extra damage she needs to play aggressively right out the gates and the flexibility necessary to keep her damage potential high once the team fights start.

This brand new take on Katarina, the Sinister Blade, will be baring her blades in an upcoming patch. We hope you’re ready!

As a militaristic state, it would perhaps come as no surprise that the primary responsibilities of Noxian women are raising strong children and providing succor for husbands who walk the path of soldiery. There are some, however, for whom nurture is not nature, and Katarina is just such a creature. Born the daughter of the feared Noxian General Du Couteau, the girl was always more interested in her father's knives than in the dresses, jewelry, and other trifles that her sisters spent so much time fussing over. A childhood dispute soon unveiled her uncanny knack for bloodshed, and her father, ever the opportunist, happily fostered her killer instincts. After training under the tutelage of the finest assassins the mighty city-state had to offer, Katarina first cut her teeth performing assassinations in the Ionian War. There, her ruthless mastery of the knife and dagger combined with her sadistic temperament to earn her the title Sinister Blade, a moniker that would follow her for the remainder of her career. She is most famous, however, for her exploits in the campaigns against Demacia, especially those surrounding her engagements with the nation's champion,

Garen; a rivalry which began when she recovered the remains of

Sion from a vanguard under his protection.

With the demand for warfare somewhat arrested by the tenuous peace settling over Valoran, Katarina sought the allure of violence in its last remaining haven: The League of Legends. Some might say it was an inevitability that Katarina's chosen path would draw her to become a champion of the League, continuing to enforce the will of Noxus and bring prestige of war to her noble family. There, she continues to perform her bloody work - esteemed and reviled, feared and adored.

"The Sinister Blade of Noxus is like a black widow - beautiful, but deadly."
―

Garen, the Might of Demacia, following a skirmish in the field

This draft bio written by RiotRaven was on the PBE but updated after community feedback.

Born to Noxian privilege, Katarina trained in the ways of the knife from the time she was a child. Now that fiery, willful child has grown into a beautiful and deadly woman. Katarina's intense passion for life is tempered by a sense of duty and loyalty to her family. That same passion proves a double-edged sword when her heart and her responsibilities are at odds.

As the free-spirited daughter of a prominent Noxian general, the young Katarina was given the best of everything. Naturally gifted in combat, she found herself drawn to blades. Much to her family's pride, she trained under the deadliest assassins in the Noxian military. It wasn't long before Katarina's instructors deemed her worthy of a trial by fire – to kill a prominent Demacian soldier. Creeping through the darkened military camp, Katarina was overwhelmed by her passion to prove herself. When the army's General strayed across her path, unguarded, she quietly slit his throat. Katarina disappeared into the night, pleased with her impressive kill. Her elation was soon crushed, as the next day her original target – the prominent soldier who was the true military genius – led his forces to ambush unprepared Noxian soldiers. Katarina flung herself into the fray to correct her mistake, earning a scar over her left eye as a permanent reminder. Even though she finally completed her task, her family's reputation was damaged. Since that day, Katarina vowed to never let passion prevent her from bringing glory to both Noxus and her family. Reconciling her desires with her duty proves to be a constant challenge. To the world, Katarina is a symbol of Noxian patriotism, though there is more to the red-haired assassin than meets the eye.

"Never question my loyalty. You will never know what I endure for it."
―Katarina