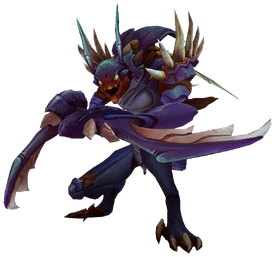 When Kha'Zix crossed over into this world, he was fragile and ravenous. The animals he first encountered were too small to fuel the rapid evolution he craved. Kha'Zix focused his hunger on the most dangerous creatures he could find, risking his life to satisfy his need. With each kill he feasted and changed, becoming a stronger, faster predator. Kha'Zix soon chased his prey with unrestrained aggression, believing he was unstoppable. One day, while savoring a fresh kill, the predator became the prey. From cover a creature pounced in a blur of fangs and steel, tackling him to the ground. It roared in his face slashing and clawing, and Kha'Zix felt his blood spill for the first time. Screeching in fury, he sliced at the brute's eye driving it back. They fought from sunset to sunrise. Finally, near death, they reluctantly separated. As his wounds closed, Kha'Zix burned with anticipation at the idea of devouring one who could match the Void's strength. He resumed his search for powerful prey with renewed vigor. Someday, Kha'Zix will feast on Rengar.

Upon spending an evolution point

If you take the time to examine the many wonders of nature, you'll find a fair number of animals that are remarkably well-adapted to their environment. It isn't every day, however, that you run across a creature that can adapt to every environment.

Feast your eyes on this fine specimen here. Meet Kha'Zix, the Voidreaver – the most highly-evolved champion yet to grace the Fields of Justice. Maybe you're marveling at the iridescent wings or the intimidating spike racks? Well, you’ll find that's just one of many possible evolutionary paths your Voidreaver can take. Perhaps some adaptive camouflage and wicked, scythe-like claws might be more appropriate to your particular hunting ground. Whichever evolutions you choose to manifest, you'll find Kha'Zix has just the tools you need to viciously slaughter unsuspecting prey.

If you're the kind of assassin that's always ready to adapt, evolve, and overcome, you'll want to keep an eye on the latest addition to the Void lineup.

Kha'Zix, the Voidreaver, will be devouring prey on the Fields of Justice in the upcoming patch. A flexible jungle assassin, Kha'Zix excels at surprising enemy champions and quickly dealing massive burst damage. Moreover, his unique evolution gameplay allows him to adapt to different enemy team comps and strategies by customizing his abilities over the course of the match. Here's a full rundown of his abilities:

The bonus effects that Kha'Zix accrues for ambushing a target make him a natural jungler. His core initiation skill, Leap, allows him to stage ganks from unexpected angles, even over long distances or across terrain. If his quarry happens to be a lone champion, Kha'Zix can utilize the bonus damage from Taste Their Fear combined with the initial magic damage from Unseen Threat to truly devastating effect. Remember that the area of effect damage from Void Spike can help clear away any lingering minions to isolate a foe, making them vulnerable to some additional punishment.

Once he's initiated, clever repositioning can allow Kha'Zix to break line of sight and refresh Unseen Threat. Juking into the brush, using Leap to withdraw and reinitiate, or entering stealth by casting Void Assault will allow the Voidreaver to continually slow enemies and lay down bonus damage from his passive. Cunning use of Unseen Threat is key to maximizing Kha'Zix's damage potential.

Later in the match, Void Assault allows Kha'Zix to safely and aggressively navigate team fights. After leaping into combat, Kha'Zix can use his ultimate to evade attacks while he picks apart vulnerable members of the enemy team. Once he's downed an opponent, activating Void Assault again can allow him to either safely withdraw or reinitiate on another target with Unseen Threat.

Each of Kha'Zix's active abilities can also be evolved to provide greater utility. At Levels 6, 11, and 16, he'll gain an Evolution Point that can be spent to unlock additional effects on a specific skill. If you'd like greater hit and run potential, for example, choosing to evolve Void Assault and Leap can drastically increase your mobility by offering additional stealth and a second Leap after scoring a kill or assist. If you find yourself falling behind, combining Void Assualt with Void Spike can give you increased durability in team fights and greater farming and poke potential while you catch up on gold. Tailoring your evolutions to address the challenges of a specific match-up can give you that extra edge you need to finish strong in a close matchup.

Inside Design: the Evolution of Kha'Zix编辑

The Fields of Justice are about to get even more dangerous, as Kha’Zix, the Voidreaver arrives to claim his place at the top of the food chain. Kha’Zix’s evolution gameplay influenced his entire design, from the abilities down through art, animation, voice, and story. To learn more about this apex predator, we caught up with some of the Rioters that helped make him a reality.

Today, a new breed of predator arrives on the Fields of Justice: Kha’Zix, the Voidreaver. Adapt, evolve, and overcome your enemies with this terrifying assassin!

Kha’Zix isn’t the only one evolving in this patch – we’re also pushing new boundaries with this launch skin! We’re pleased to announce that the Voidreaver will be sporting our most advanced launch skin to date. Featuring a completely new character model, robotic animations, futuristic sound and spell effects, and a sci-fi treatment for his voice, Mecha Kha’Zix is the epitome of awesomeness evolved.