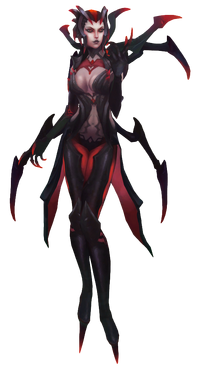 Vicious and elegant, Elise's charismatic grace lures the innocent and greedy alike into her web of deceit. While her victims may discover her true intentions, no one has ever lived to reveal what dark secrets lie behind her enigmatic guise.

In dark halls, hidden from society, Elise preached the word of a mythical spider god. Her desperate followers hungered for the god's favor, believing its blessings to be the source of Elise's vibrance and power. When Elise proclaimed that she would lead a pilgrimage to the spider god's shrine, she selected only her most devout disciples to join her. Ecstatic, the chosen few followed her blindly as she led them on a perilous journey across the sea. When they came ashore at their final destination, the mysterious Shadow Isles, Elise led them to a cavern shrouded in webs. Expecting a shrine, the group looked to their priestess in confusion. She turned to the crowd and raised her arms in triumph, revealing strange, spider-like legs that grew out of her back. Seeing her terrifying true form for the first time, Elise's followers turned to flee, but she conjured magical webs to trap them. With her victims ensnared, she turned to face the cave and uttered a screeching cry. An enormous undead spider-beast emerged from the darkness, dragging its hideous bulk on thick, pointed legs. Elise's followers could only scream as the monstrous spider ate them alive. She approached the sated creature, extracted its venom, and drank the strange substance. An immediate sense of rejuvenation flowed through her veins. With mortality delayed once again, Elise left to rejoin her congregation. They were overjoyed to hear that their fellows had chosen to remain at the spider god's sacred home. Elise reassured her disciples that she would lead another pilgrimage in due time. The spider god would be waiting.

"The truly faithful need not fear the spider's embrace."
―Elise

"Elise's regal demeanor and captivating charms belied the feeling of dread she conjured in the pit of my stomach. Something in the deceptively musical timbre of her voice gave the impression there was a monstrous beast locked away beneath that unearthly smile. I looked around at her spellbound followers, and could not shake the feeling that they were ensnared like insects in a web, awaiting some horrible fate."
―

"As the fog parted and I first beheld the Shadow Isles, I sensed immediately that something was amiss. From the mysteriously placid waters of the bay to the dead calm of the night air, an eerie stillness gripped the place – even the sea and sky. Even as I made ready to go ashore, the crew begged me to return at once to the mainland."
―Elise

"Despite its size, the immense forest loomed like a sepulcher around us, and the dank air and unnatural stillness bred increasing feelings of paranoia and dread. My companion begged me to turn back, but some primal yearning spurred me onward, deeper into the gloom."
―Elise

Elise captures the Altars on Twisted Treeline, the Altars may give the following unique responses:

Priscilla, the Spider Queen, was an unreleased champion that was left in the development stage by Riot Games. Her artwork and spell icons remained in the game files.

It was rumored that the Spider Queen was reworked into

Nidalee, since that was the name used for the Spider Queen at the time. Also, in early development, Nidalee used poison in all of her attacks and her Prowl caused her to become camouflaged. However, on May 22nd, 2010, Coronach stated: "To fuel more speculation, Heimerdinger is not Averdrian and Nidalee is not the Spider Queen."[1] It was later believed that Priscilla had been reworked into

Urgot because of the physical similarities, though it was uncertain whether or not their abilities shared any similarities.

Priscilla's Blessing, an item released with the launch of Dominion in September 2011 may have a correlation to Priscilla because of the name and the fact that the item grants a higher capture rate and spiders are known to capture enemies, although the item was removed shortly after.

There was a poll on the League of Legends forums petitioning for Riot to bring the Spider Queen into the game. The forum can be seen here.

Swear your allegiance to the Shadow Isles, summoners! Shrouded in mist and shadows, this mysterious land promises death for those brazen or unfortunate enough to make their way to its shores. Most who journey here never return, but a few are embraced by this strange place and seize unimaginable power. Among these terrifying forces is Elise, the Spider Queen.

Learn more about the Shadow Isles and the Spider Queen here.

This patch, we'll welcome a champion with a lot of history into the League of Legends lineup: Elise, the Spider Queen. Originally concepted over three years ago, Elise proved to be a challenging champion to fully realize. Finally coming together as a transform champion, Elise has the ability to assume the form of either a regal mage or a deadly spider assassin.

Like all transform champions, successfully playing Elise involves balancing two distinct kits. More than any of her counterparts, however, the Spider Queen's two forms embody distinct, but complimentary roles. Unlike Jayce, whose kit emphasizes flowing smoothly between ranged and melee skillsets, or Nidalee, who uses her cougar mobility to split push and create distance for her long ranged attacks, Elise's two ability sets separate definitively into mage and assassin roles.

In her human mage form, Elise specializes in keeping her distance using low-cooldown nukes and crowd control abilities. Her spells emphasize wearing down high-health targets in preparation for a brutal finish in spider form. At the heart of this gameplay is Neurotoxin which deals damage based on the opponent's current health. While in this form, she also generates a spiderling each time she casts a spell. Upon transformation into a spider, she summons these spiderlings to fight alongside her. Investing the time to build up your minion count is essential to performing a perfect assassination.

Once she's switched to her spider assassin form, Elise's kit takes on an entirely different theme. She gains a number of bonuses to her melee capabilities, and her spiderlings become active to help rapidly damage an opponent. Using Rappel, she can ascend above the battlefield, vanishing from sight and becoming untargetable for a short duration. Once she's suspended, she can lower herself upon a nearby target, surrounding them with spiderlings. Boosting her minions' attack speed with Skittering Frenzy can quickly burst down a surrounded enemy, leaving them vulnerable to execution with Venomous Bite.

Using both spider and human form effectively is the key to making the most out of the Spider Queen. Having the good judgment to stay safe in your mage form while you fight to create the opportunity for a clean spider kill will make or break your success on the Fields of Justice. 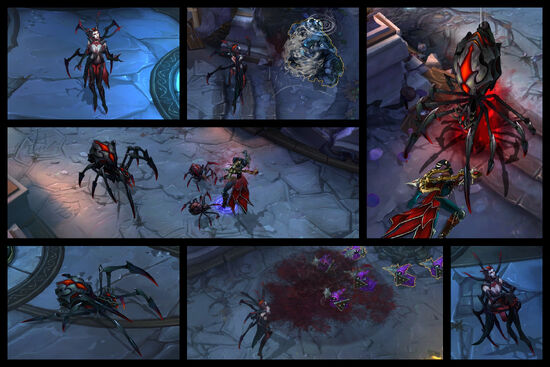 Elise, the Spider Queen, is poised and ready to unleash her horrific powers on the Fields of Justice. We spoke to some of the Rioters involved in bringing Elise to life and asked them about the challenges of arachnophobia, visual design, sound design, and what's so damn cool about transforming into a monstrous, man-eating spider. Here's the inside scoop on Elise from the developers behind this dangerous new champion.

These images and names were extracted from the game files.