Ezreal was born with the gift of magic flowing through his veins. Ezreal, however, was also born with a much stronger sense of wanderlust. Put into school to become a skilled techmaturgist, Ezreal quickly became bored with magical studies. By the time the boy genius was eight years old, he had fully mapped out the underground tunnels of Piltover. The quality of his work was so great that the government of Piltover purchased his maps and salaried his services as Piltover's Grandmaster Explorer. This sealed the deal on Ezreal's path in life - he would eschew the arcane arts in favor of archaeology. Since then, countless of Ezreal's adventures have been written about as romanticized stories.

One of Ezreal's latest adventures, however, has brought him face-to-face with his other legacy - his latent magical power. While exploring the pyramids of Shurima Desert, Ezreal uncovered an amulet of incredible power. Aside from the sheer size of the amulet (it was made for a being easily twice Ezreal's size), it allows the wielder to control and shape magical energy - provided a source of magic is in the vicinity. This allowed Ezreal to tap into his natural talent for magic without having to put any serious effort into it - a big win for the Prodigal Explorer. The drawback is that for some unknown reason, the amulet is attuned with summoning magic. Without warning, Ezreal may find himself acting as a champion for, as he puts it, "a summoner hell-bent on resolving some irrelevant world-shattering League conflict." Still, Ezreal feels being summoned into a Field of Justice on occasion is a small price to pay.

Beginning of the match

Ezreal prepares to fire his weapon but it malfunctions and shoots him in the face.

Announcement made in the Sneak Peak by ByronicHero:[1]

As you may have noticed, we've been releasing some champions that really challenge existing gameplay paradigms. And this next one is no exception. In addition to a haircut that defies the very laws of physics, the latest and greatest from our design team is sporting some pretty edgy magical abilities. Meet Ezreal the Prodigal Explorer, a champion who breaks new ground – in both gameplay and fashion – here at the League of Legends. If you're feeling rather passionate about skill-shots these days, start getting excited, because this particular gentleman should really scratch that itch.

Can you feel the electricity in the air?

Test drive all the high-tech advancements we've managed to cram into Pulsefire Ezreal here at the Pulsefire Armory.

Now that you've had a look under the hood, what do you guys think? Should we do the Pulsefire Ezreal treatment for other champions? 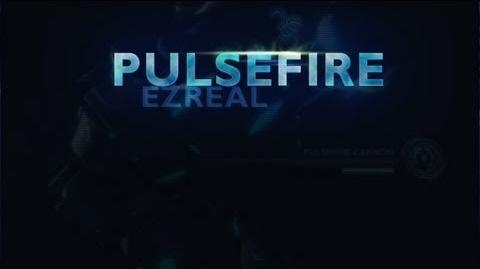 There’s been a question hanging in the air on the League of Legends forums for a while now: “Pulsefire Ezreal where?!” Well, today, we’re pleased to announce that Pulsefire Ezreal is here!

Want to brush up on your Prodigal Explorer skills before you activate your Pulsefire Armor? Check out this brand new Ezreal Champion Spotlight below.