For the item in League of Legends, see

Zz'Rot Portal.
For the Shadow equivalent of the item, see

Unstable Zz'Rot Portal.
For the Radiant equivalent of the item, see

At the start of combat, the wearer

When the wearer dies, a Voidspawn arises,

taunting nearby enemies. Summoned units can spawn Voidspawns at 25% effectiveness. 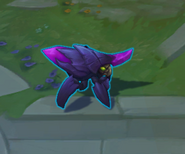