< Zoe
View source
watch 02:52
Roblox: DeepWoken - The Loop
Do you like this video?
Play Sound 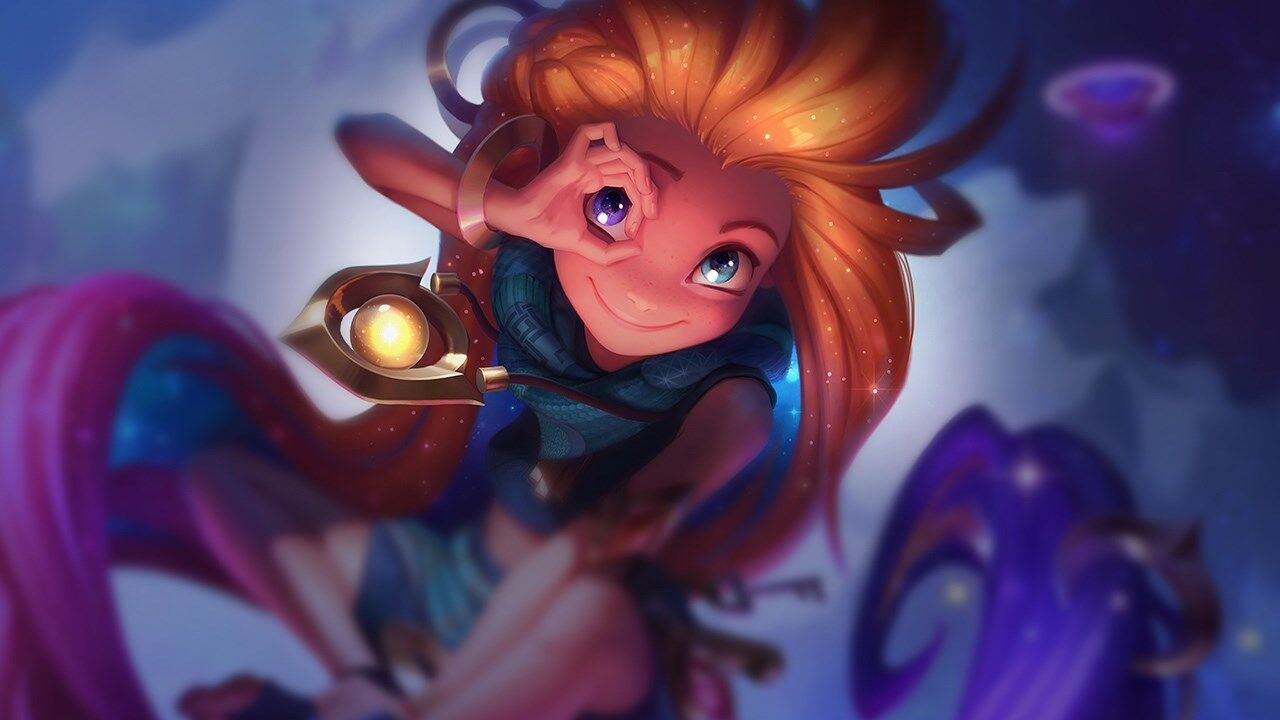 the Aspect of Twilight

Zoe is a champion in League of Legends.[1]

Innate: After casting an ability, Zoe's next basic attack or

Active: Zoe shoots a star in the target direction that detonates upon colliding with an enemy, dealing magic damage to enemies within the area, reduced to 80% for enemies hit beyond the first. The total damage is increased by 0% − 150% (based on distance traveled).

If the star does not collide with an enemy, it lingers at maximum range for 1 second, allowing Paddle Star to be recast after 0.25 seconds in the duration.

Recast: Zoe redirects the star to the target location, resetting its damage modifier on cast. The redirected star can travel beyond the new location, continuing forward until it moves more than 800 units from Zoe.

Paddle Star's recast can be used while affected by

item active, they drop the corresponding

Spell Shard onto the ground that grants

sight over a 100-radius area and remains for 40 seconds. Some enemy

minions spawn with random Spell Shards that only drop to the ground for 20 seconds if killed by Zoe.

Collecting a Spell Shard allows Zoe to activate Spell Thief within the next 60 seconds. She can replace her current Spell Thief active by moving directly onto another Spell Shard.

Active: Zoe mimics the active of the collected Spell Shard.

Passive - Wheeeee: Casting Spell Thief or one of Zoe's own summoner spells grants her

bonus movement speed for the next few seconds, and summons three bubbles that orbit her for the next 10 seconds.

If Zoe is not affected by

Active: Zoe kicks a bubble in the target direction that bursts on the first enemy hit, or else doing a short 1 second bounce at maximum range then forming a trap on the ground for 5 seconds that arms immediately. The bubble can only move through terrain once but may do so indefinitely, gaining the distance travelled inside terrain as bonus range, and will fall short if it would enter terrain again.

drowsy for 1.4 seconds, which gradually

slows them, after which they fall

The next instance of non-

monster damage taken by the

sleeping target consumes the debuff to deal them

Active: Zoe dives into a portal that she opens beneath her,

blinking a fixed distance in the target direction and remaining there for 0.75 seconds, during which she sets her movement speed to a static 0 and has

unobstructed vision. After 1 second, she blinks back to her casting position.

Zoe is unable to basic attack and cast her abilities and movement spells for 0.75 seconds after casting Portal Jump and for 0.5 seconds after blinking back. 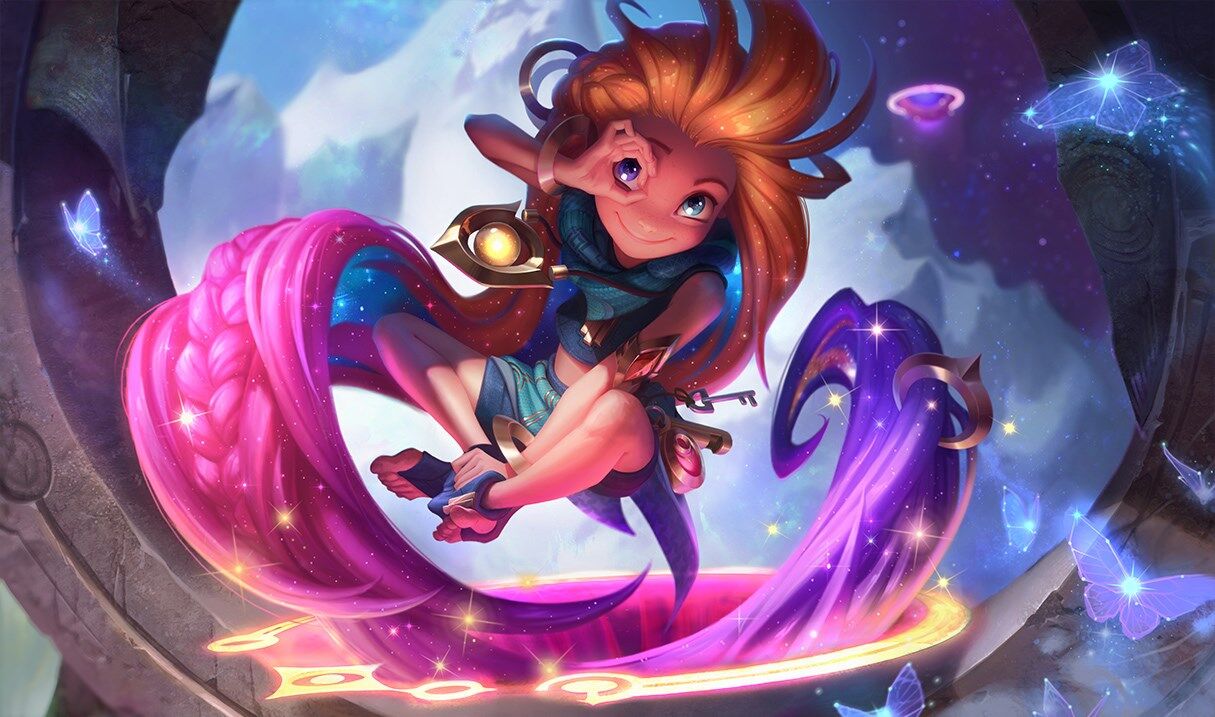 975
21.11.2017
As the embodiment of mischief, imagination, and change, Zoe acts as the cosmic messenger of Targon, heralding major events that reshape worlds. Her mere presence warps the arcane mathematics governing realities, sometimes causing cataclysms without conscious effort or malice. This perhaps explains the breezy nonchalance with which Zoe approaches her duties, giving her plenty of time to focus on playing games, tricking mortals, or otherwise amusing herself. An encounter with Zoe can be joyous and life affirming, but it is always more than it appears and often extremely dangerous. 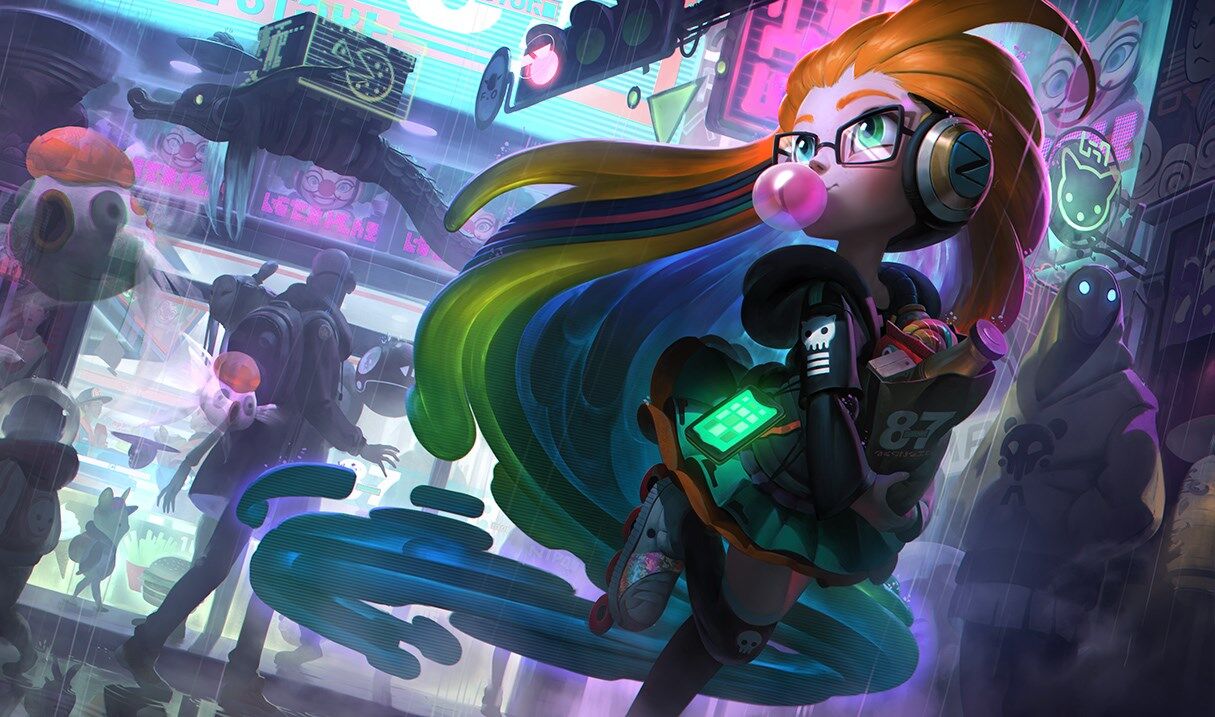 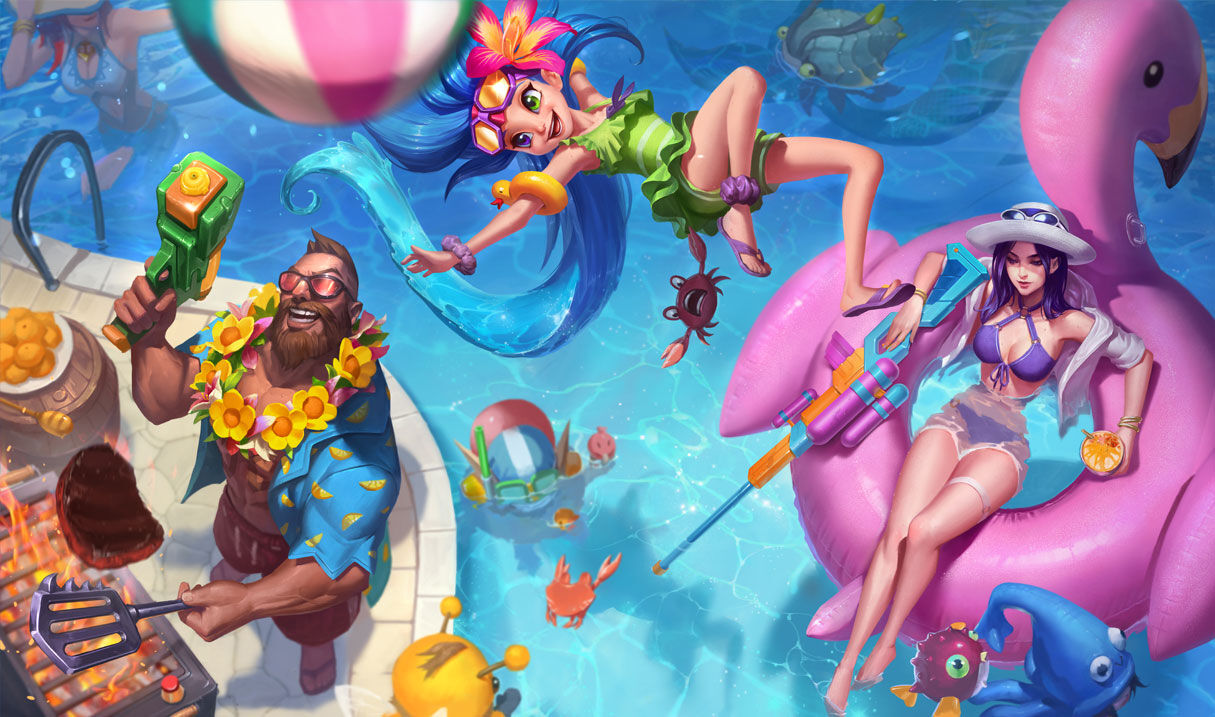 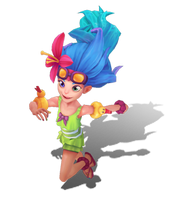 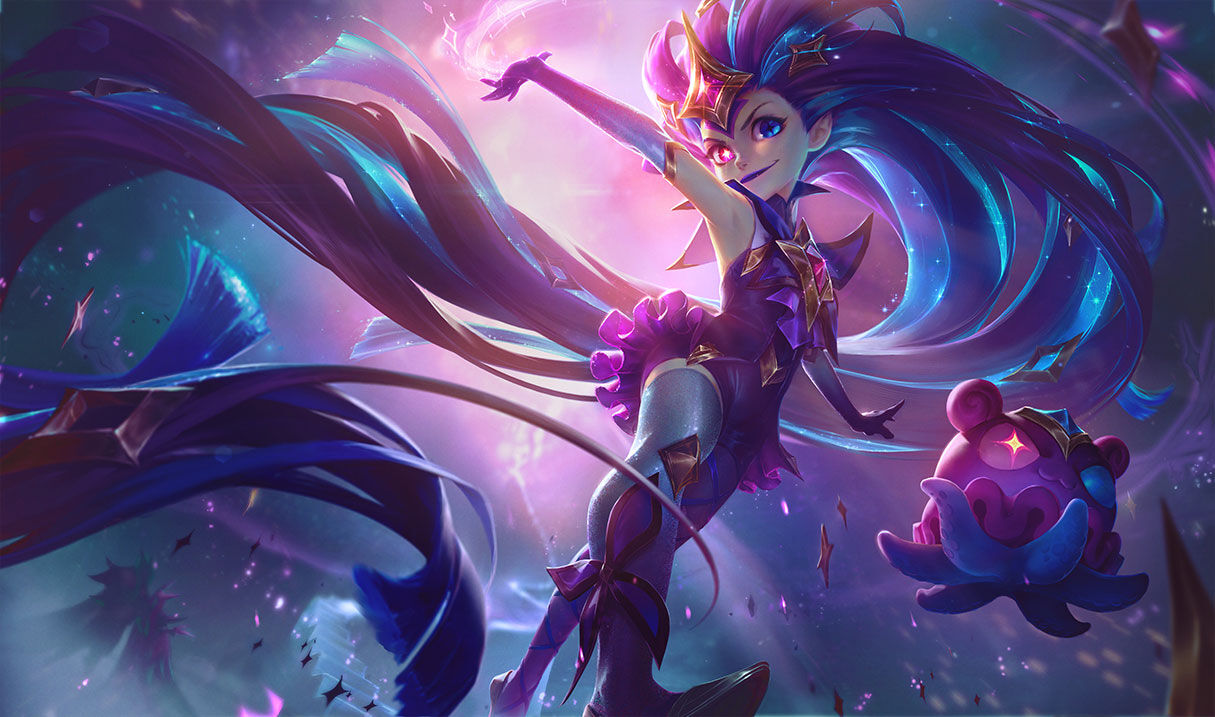 1350
12.09.2019
A member of the ancient, first group of Star Guardians, Zoe's heart desired not love, but chaos -- twisting her newfound power into a malignant expression of cosmic madness. After numberless eons of hunting the First Star's chosen, she has finally come to Valoran City, hoping to destroy the latest generation of Guardians as she has countless others. 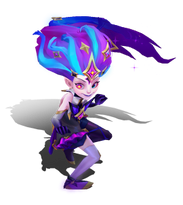 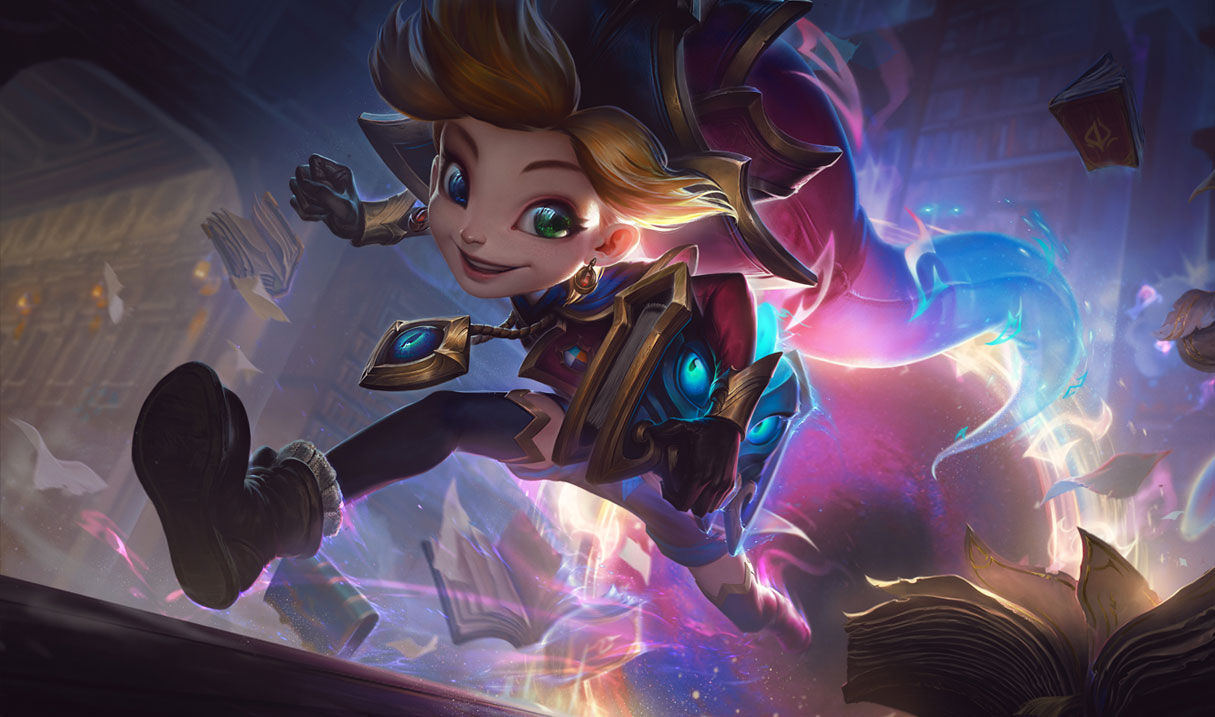 1350
09.07.2020
A promising student of magic at the Arcanist Academy, Zoe has ignored the advice of her headmaster and embarked upon a grand adventure the likes of which she is utterly unprepared for. Considering her penchant for sewing chaos wherever she goes, the world might be more unprepared than she is. 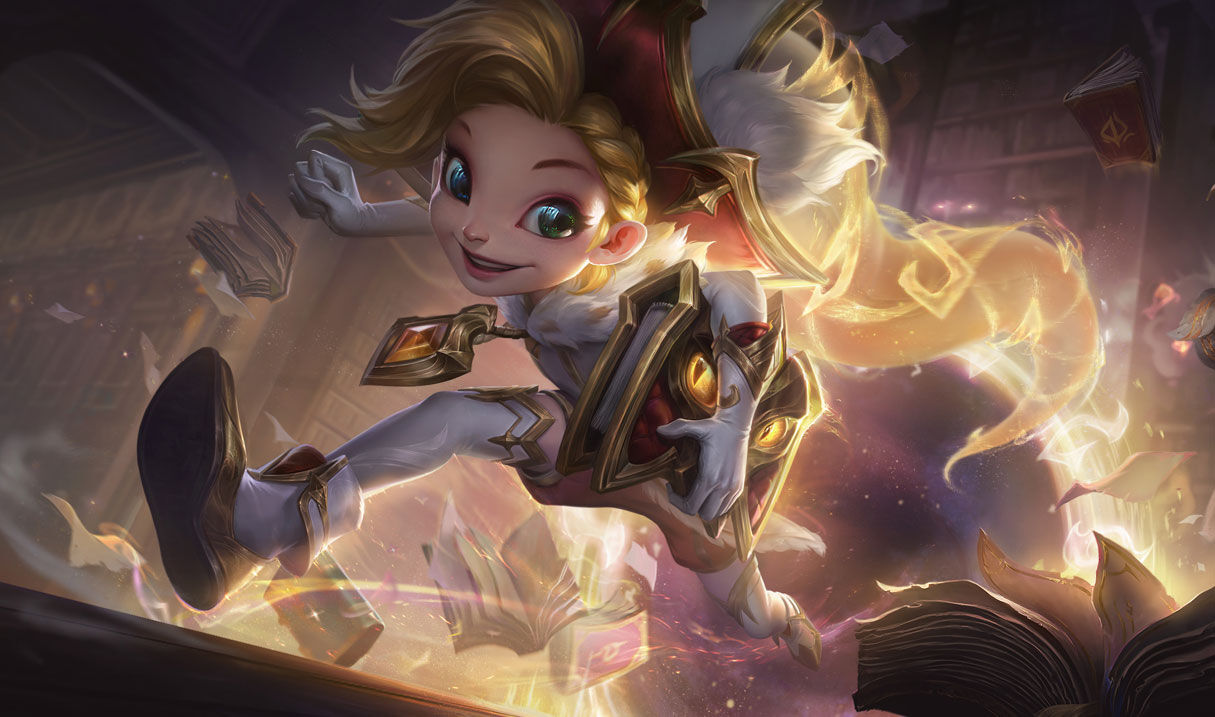