It's been a long time since we had a new mage (and even longer since we released a new burst mage). With this in mind, we've redirected some time to creating a new burst mage with the tools to approach a fight from... interesting angles. We also wanted to take this chance to do something a bit more playful and bubbly as opposed to the dark and serious champions we've done recently. The new mage will have unique abilities that haven't been seen before in League, so hold onto your summoner spells and don't fall asleep, because change is coming... cataclysmic change. Also, sparkles! 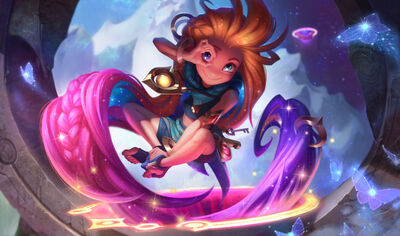 Don't be fooled by her childish appearance— Zoe is an ancient being, a cosmic messenger of Targon. When the Aspect of Twilight appears, she warps reality. Despite all this power, she often shirks her duties in favor of blowing bubbles and playing tricks on unsuspecting mortals. One can never be sure of what she's really aiming for... other than her own amusement.[1]

Zoe fires a star that deals magic damage in a small area and applies her passive. She can recast Q mid-flight to redirect the star to a new position near her. The star's damage increases based on the distance it has traveled in a straight line.

Enemy summoner spells and active item casts drop spell shards on the ground for an extended period of time. Some minions also drop a spell shard when killed by Zoe. Collecting a spell shard grants one cast of that spell or active item.

When casting any summoner spell, Zoe briefly gains bonus movement speed and tosses missiles at the nearest enemy (prioritizing her nearest enemy). Each missile can trigger her passive.

Zoe throws a ball that detonates on the first target hit, dealing magic damage and making the struck enemy drowsy. After a couple of seconds, drowsy enemies will briefly fall asleep and take extra damage from the next attack or spell. Whenever an enemy falls asleep, this ability's cooldown is reduced.

If the Bubble hits nothing, it lingers on the ground as a trap. If cast over a wall, it gains casting range

Briefly teleport to a targeted position, then teleport back. During the teleport you can use abilities and attack normally, and see over walls. However, you won't be able to move.

As the Aspect of Twilight, you're a trickster with a bag full of toys and traps. Surround your enemies with balls, stars, and spells, then

When entering a teamfight as Zoe,

Spell Thief forces your opponents to think in a new way about how they use their spells and active items. Too quickly, their

Flash becomes your flash— or even better, their

Zoe is totally a normal kid. She likes going on adventures, has an obnoxious amount of energy, and loves her pet dog. Except Zoe's “adventures” often involve zooming through the stars, her endless energy can turn cities to dust, and her pet doggo is actually a sassy space dragon.

She might act (and sometimes feel) like a normal girl, but in reality, she's far from it. Zoe's the cosmic messenger of Targon, tasked with giving others a heads-up when cataclysmic change is coming. It's a duty she'll certainly fulfill, so long as she isn't distracted by butterflies. Or sparkles. Or a certain blonde-haired explorer.[2]

THERE ARE HOLES IN REALITIES... AND IN DONUTS 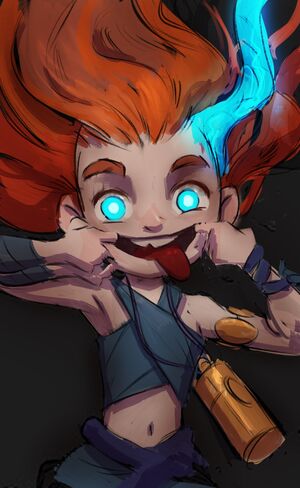 Thousands of years ago, Zoe was a normal girl living in the foothills of Mount Targon. Her mischievous, imaginative personality got her into a lot of trouble with her strict Lunari teachers, but it was this very playfulness that caught the attention of an ancient and powerful aspect. On an afternoon where Zoe had caused quite a kerfuffle, this aspect appeared and presented her with a trial. Zoe was offered six objects, five of which would help diffuse the situation... and a toy ball. Of course, Zoe kicked the toy ball, singing exuberantly as it ricocheted off the walls. Upon seeing Zoe's unwavering light-heartedness, the aspect opened her a portal to the top of Mount Targon. When Zoe stepped through, she was forever merged with the ancient being. She's spent a millennia journeying to (and playing with) dimensions and realities beyond human comprehension. Now she's returned to Runeterra and has hardly aged a year.

“Emotionally, she's still a young girl,” says narrative writer Odin “WAAAARGHbobo” Shafer. “But it's like she grew up in Tibet, experiencing metaphysics and transcendental meditation, and now she's in Manhattan like, 'This is a hot dog. Have you ever seen a hot dog? THIS IS AMAZING!'” Zoe's traversed galaxies and jumped through black holes, but she's done it for so long that it's boring now. In contrast, the seemingly mundane things of Runeterra are new and exciting to her. She may have lived in Mount Targon once, but that was literally ages ago in a rather secluded community. Now she's back, and there are so many places to explore and things to rediscover.

One of the strongest inspirations for Zoe's character were tricksters from various mythologies. Tricksters are clever, mischievous beings who can bend the rules of reality and who know things others don't. Also, they're usually jerks. Everything they do is in an attempt to entertain themselves, and they really don't care if they hurt others along the way; in fact, that's often the best part.

Like her trickster god counterparts, Zoe loves having fun. Sometimes, that comes at the expense of others, but it's never her intention to cause harm. Really, Zoe wants to help people. She even tries to help people. It's just that two things sometimes conflict with this. (1) Zoe serves the bigger picture, aka humanity as a whole, and sometimes helping humanity happens at the expense of individuals. And (2) Zoe's ways of helping can be a little unconventional and may also (unwittingly) cause destruction. “Zoe is more of a chaotic good character, whereas traditional tricksters are chaotic evil to chaotic neutral,” says WAAAARGHbobo. “When Zoe tricks and teases you, it's usually just her way of preparing you for what's to come.”

As the Aspect of Twilight, Zoe's character is all about change. Just like twilight is the transition between day and night, Zoe is between childhood and adulthood, and her very presence indicates that a colossal shift is coming. Moving from one stage of life to another can be tough, which is why Zoe is always there to help you when you need it. Just... in her own way.

THE COLOR OF TWILIGHT

Zoe and her aspect merged thousands of years before champions like Taric, Leona, and Pantheon were even born. She grew up in an ancient version of Mount Targon, which meant her visual design didn't necessarily have to adhere to any one group found there today. “I moved away from modern Targonian styles and tried to imagine what clothes would've looked like back then,” says concept artist Sunny “Kindlejack” Pandita. “Then I combined that with a little girl who's dressed herself from her parents' wardrobe, with giant bangles and an oversized scarf.”

Zoe also carries around a handful of trinkets she's collected over the years. A normal kid's collection might contain things like shiny rocks or dead bugs, but not Zoe's. The items she keeps are powerful trinkets that are more on her level, such as one of Bard's chimes and a moonstone.

The cosmic trickster's excessively long, colorful, sparkly hair wasn't always so long, colorful, or sparkly. The further Zoe moved through development, the longer and more dramatic her hair became. “It was one of her defining features,” says WAAAARGHbobo. “So it just kept on growing.”

This eventually raised some concerns, not because her hair was too long, but because it was unclear if it'd be possible to recreate her glittering locks in game. “Zoe's hair was really important to her silhouette and how people felt about her,” says Kindlejack, “so we committed to finding a way to make it work.” There was no individual technique or technology that could've been used to bring Zoe's hair to life, but combining a bunch of them did the trick. Some of tech used includes: The flowing-cloth technology used for the Immortal Journey skins, the dragon-tail tech used for spacy doggy, multiple bone chains to help make the animation look more natural, and a ton of VFX (aka sparklez!).

NEXT TIME, CAN YOU BE A CHALLENGE?

The original goal for Zoe was to create a light-hearted burst mage with accessible mechanics; she turned out to be some of those things. “The early goals for a champion are more like guidelines,” says senior game designer Bradford “CertainlyT” Wenban. “And for mages, the gameplay can change more rapidly and more drastically than any other role.” This is because a champion like Irelia—a melee top laner with short-ranged abilities—comes with a checklist of kit requirements, including healing and a way to deal with tanks. But mages don't really have any of those inherent needs, so it's basically a blank slate.

The thing that shaped Zoe's kit most was her Q, which was always a long-ranged, high-damage, redirectable skill shot. “The big question for Zoe became, 'What do you give to a girl who doesn't really need anything else?'” says CertainlyT. “She has one high damage nuke. You could probably get through a game of League with all your other buttons broken.” Because so much of Zoe's power is loaded into her Paddle Star, the rest of her kit was designed to help her land Qs more reliably while still giving opponents a fighting chance.

For example, Zoe's Sleepy Trouble Bubble has a delayed CC effect, and this makes it much more effective as an offensive spell than a defensive one. Throwing it at a Master Yi rushing at you probably won't stop him, but it can help you land a max-ranged Q on that pesky, boyfriend-stealing light mage. Plus, the delayed sleep effect plays into Zoe's role as a cosmic messenger. It's like she's saying, “Hi! You're going to be CCed soon… and then you're going to be struck by a meteor!”

That's the thing about Zoe—even though she's a powerful mage, she really just wants to have fun. Sometimes that means jumping through a portal to toss sparkles at her enemies, blowing raspberries on the way out. Other times, it's skipping over to a freshly-dropped flash so she can keep up with her new friend. And once in awhile, it can be exciting to launch a shooting star at somebody's face.

But hey, at least she'll warn you first.

Retrieved from "https://leagueoflegends.fandom.com/wiki/Zoe/Development?oldid=3070315"
Community content is available under CC-BY-SA unless otherwise noted.