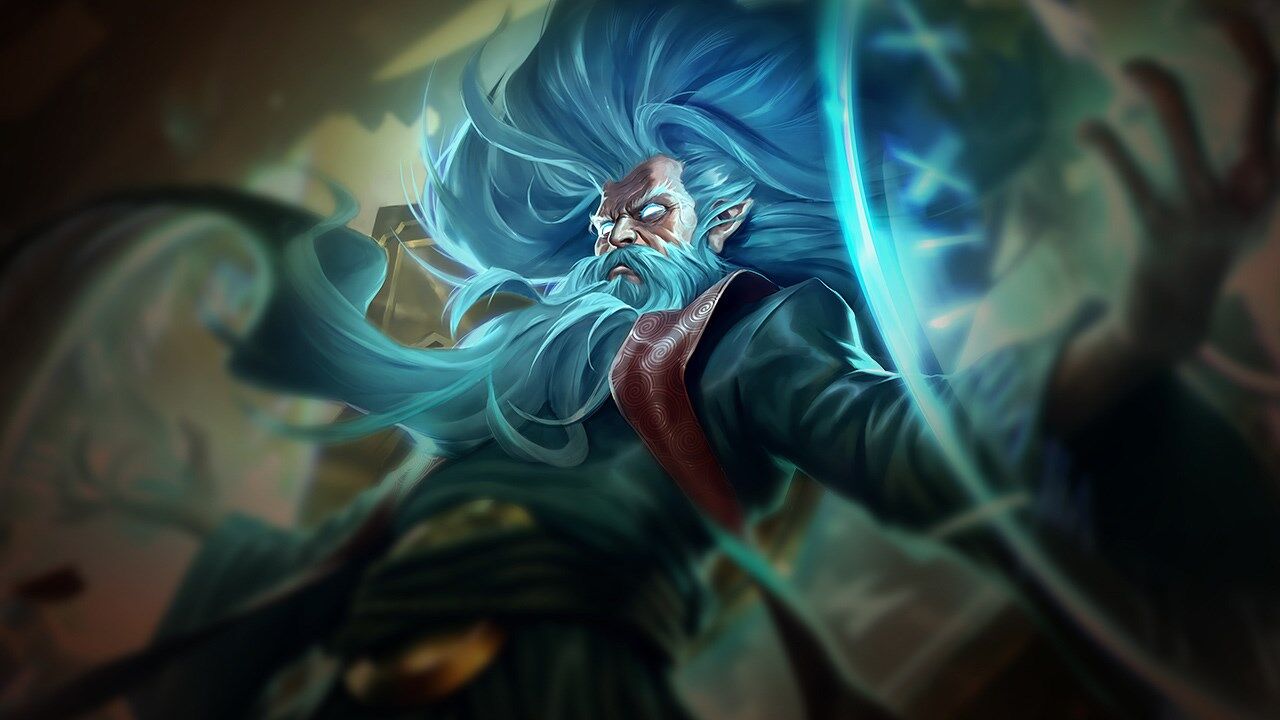 Once a member of

Zilean is a prodigious elemental mage who seeks mastery over time itself. After using his powers in an attempt to save his people from the

Void, he now drifts through the past, present, and future, bending and warping the flow of time around him. Zilean has traveled from

Runeterra's mysterious creation, all the way to its seemingly inevitable ending, searching tirelessly for any strand of fate that might undo his homeland's destruction.

Icathia, most desolate and cursed of lands, was not always so. Theirs was a rich and diverse civilization, ruled by benevolent Axamuk, last of the Mage Kings of old. As the

Shuriman empire expanded across the continent, Axamuk's calls for peaceful coexistence were ignored, and his armies destroyed by the god-warriors of the Ascended Host.

Though humbled by this defeat, many Icathians saw an opportunity for mutual advancement. Accepting an offer of autonomous satrapy, they installed a governing council of distinguished mages, philosophers, and lawmakers to oversee the transition of power.

Zilean joined the council's ranks. He was an elemental mage with a prodigious understanding of physical reality, who had studied under the greatest minds of the age—from the great Yun of

Ixtal, to the astromancers of Faraj, and countless others besides.

There was one component of the material realm that few had ever truly grasped, but Zilean was determined to master.

Time was the one inescapable constant, in all things. Even the mighty god-warriors were not immune to its passage... though they were revered above all others in Shuriman culture.

As part of the political establishment, Zilean now saw more clearly the smoldering discontent among the citizens of Icathia. While their land was home to some of the most heroic leaders and revolutionary thinkers in the empire, not one had ever been deemed worthy of Ascension. Again and again, the council submitted petitions to the distant emperor, yet access to the Sun Disc was denied, without explanation. For all they gave, it seemed Icathians would never be seen as equals.

Zilean's own resentment grew, yet he was worried by open talk of secession among his peers. He was a patriot through and through, but in the face of the Ascended Host, any rebellion could only end in calamity for his people. Seeking a diplomatic solution, he went as an envoy to neighboring Kahleek, Kalduga, and Ixtal. He had made many allies in his lifetime, and he implored them to stand with Icathia.

Each time, the answer was the same. They would not defy Shurima. If Zilean's people wanted to, they would do so alone.

Returning home, he was shocked to find the council had decided to crown a new Mage King. Breathlessly, joyously, they told Zilean of the ancient and forbidden power they had discovered—a power so great, it would all but guarantee Icathia's victory.

They told Zilean of the power of

He looked to these reasoned, wise Icathians, but saw only madness in their eyes. As much as it grieved him, Zilean would rather his homeland's revolution be crushed, than to let this abomination be set loose.

Zilean's worst fears proved true. Once unleashed in battle, the Void overwhelmed the mages attempting to control it, and Icathia was doomed.

As he tried to escape the capital, the ground shook. Buildings toppled. Such horrors as had no place in this world or the next erupted from the depths, driving terrified citizens before them.

They were trapped. Hundreds of thousands of innocents would die. In desperation, Zilean urged as many as he could to take refuge in his tower, and did the impossible.

He removed the entire structure from time.

Crashing to the cold floor, his power spent, Zilean looked at the frozen figures all around him. The Void was halted, but only within those walls—outside, where Icathia once stood, there was nothing.

Zilean had spent decades trying to comprehend the mysteries of time and causality, and it seemed only he could move freely back and forth within the anomaly he had somehow created. These people had been saved, true enough. He just didn't know how to undo what he had done to achieve it. Through deep meditations and esoteric devices of his own design, he began to divine the strands of past and present that led to this moment, gradually learning how to move back and forth along them, looking for a future where his efforts had already succeeded...

It was there that he found the true threat: the end of everything. The great unmaking that awaits Runeterra.

Effectively, Zilean now exists everywhere, and always has. Even so, he is only too aware of the consequences of trying to bring about change in the world and sparking other unexpected destinies—often conflicting, and almost always more dangerous. Perhaps if he can find a way to save his own people, then the greater disaster might also be averted.

The only question is, what might he be willing to sacrifice along the way? 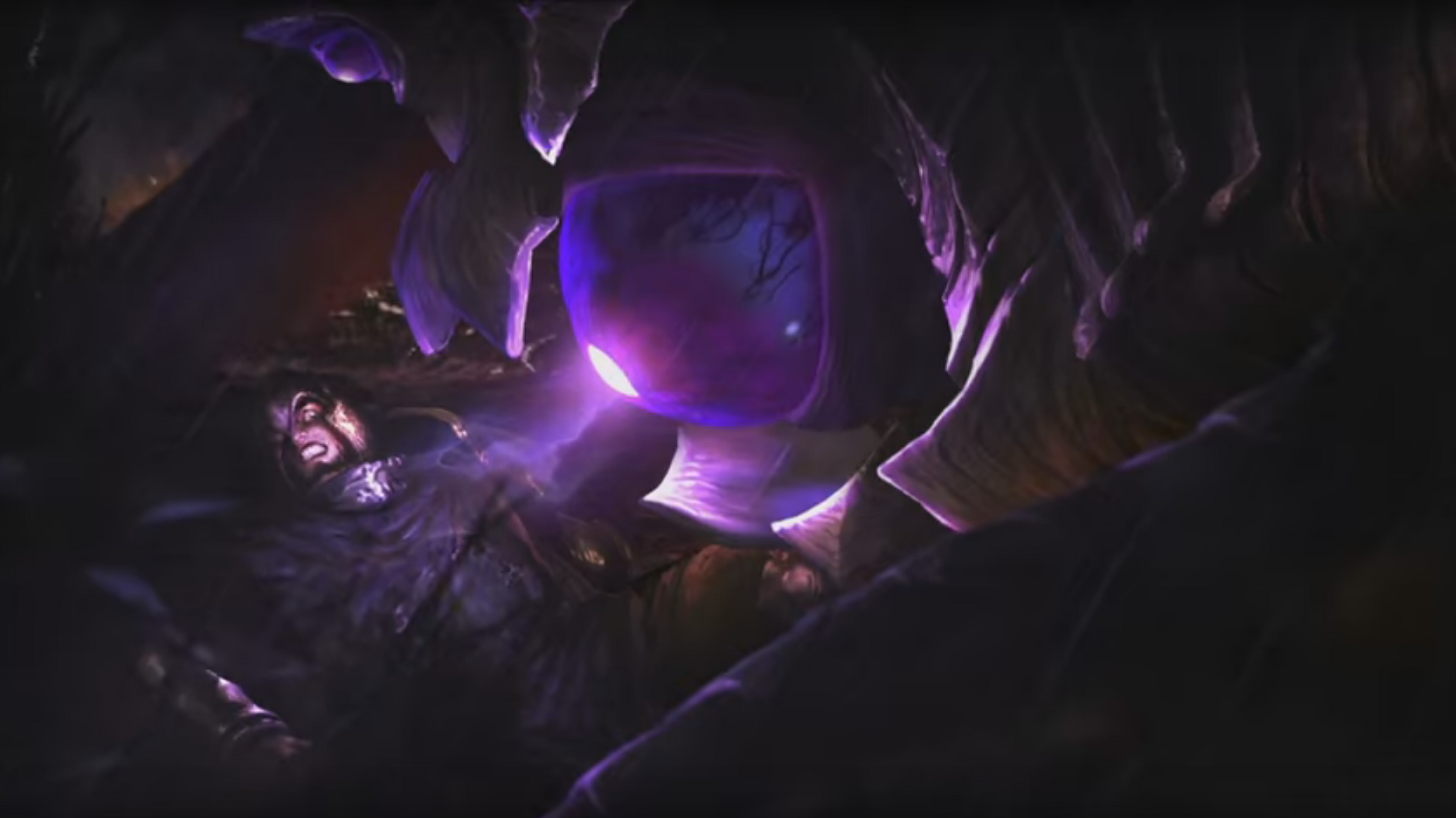 A tentacled horror of the Void, Vel'Koz explores Runeterra with singular purpose: to absorb all knowledge. With his unceasing gaze, Vel'Koz fires disintegrating beams that obliterate and analyze all in his path, feeding him vast quantities of information. None know why he requires such material, though some speculate he seeks to understand Runeterra in order to hasten its ruin.

Universe | Characters with lore
Retrieved from "https://leagueoflegends.fandom.com/wiki/Zilean/Background?oldid=3255532"
Community content is available under CC-BY-SA unless otherwise noted.