Yeti's Vigil was a settlement located in the northeastern part of the Ridgeback Mountains in northern Freljord. It was the center of the Yeti civilization before the fell in the battle against The Void, leaving the place in ruins. 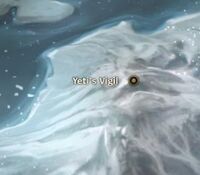 Ruins of the lost yeti civilization. Where dreams swirl in snow, an unlikely friendship was born. This is the location where

Gnar lived around Yeti's Vigil and fought alongside the Yeti during their battle against the Voidborn and Watchers.

Freljord
Retrieved from "https://leagueoflegends.fandom.com/wiki/Yeti%27s_Vigil?oldid=3143161"
Community content is available under CC-BY-SA unless otherwise noted.