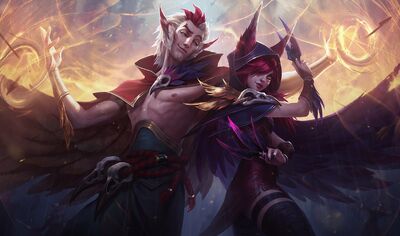 Xayah huddled at a corner table, pretending to scribble notes on some old maps. A vastayan

dancer across the bar captured the room's attention with a flamboyant performance, lulling the audience into an easy mood. Xayah made eye contact with the vastayan and nodded toward an Ionian soldier sitting in the back row. Time to move. The dancer flashed a knowing smile and leapt toward the soldier, letting loose a vicious kick. With bar-goers scrambling away from the brawl, Xayah surged across the room, hurling a storm of

feathers. The soldier collapsed and the Rebel's job was done.[1]

After casting an ability, Xayah's next few basic attacks will pierce through all enemies in their path (dealing reduced damage to all targets after the first) They'll also leave a feather where they land. Feathers remain on the field for a moderate length of time.

Xayah throws two blades in a line, damaging all enemies hit. The blades leave a

feather where they land.

Xayah conjures a storm of feather blades that increase the strength and speed of her next few basic attacks. If Xayah attacks an enemy champion while empowered by Deadly Plumage, she'll gain a short burst of movement speed.

feathers, which deal damage to any enemies they strike on the way back to Xayah. If a target is struck by several

feathers at once, they'll be briefly

leaps into the air, becoming briefly untargetable. After a short delay, she hurls a storm of blades in a cone, each of which deals damage to struck enemies and leaves a

feather upon landing. Xayah may continue to move while

If either Xayah or

recalling, their lover can sync up with them, choreographing a perfect return to base. 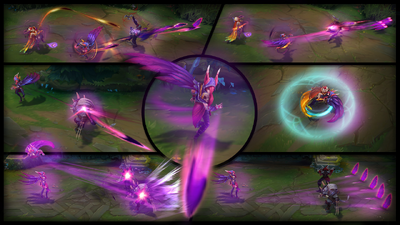 Some ADCs can charge straight into combat and start blowing stuff up, but Xayah works best if you take some time to create a game plan. Smart Xayah players will use minion waves to plant fields of barbed

feathers, daring opponents to step within their range. When the battle begins, the Rebel gracefully flits around the outskirts of the conflict, slicing up targets with

Double Daggers and using her

feathers to create a zone of control.

When the fighting gets hot,

Featherstorm can save Xayah from the mayhem or smother her enemies. The best Xayah players will use her

ult to achieve both at once, using the brief untargetability to dodge an enemy ultimate while also surging forward to spike with knives and feathers. If Xayah's good, you won't notice her at all - until, suddenly, she's swooping in for the kill.

Clean Cut through whole waves of minions, shredding their ranks with a single auto. This ability works much the same way in teamfights, where Xayah can punish enemy backliners with feathery shrapnel while focusing on wearing down frontline tanks.

When a bad guy comes after Xayah and

Deadly Plumage activates, she becomes the undisputed queen of kiting. With her basic attacks leaving

feathers in her wake, anyone chasing her in a straight line is just asking to get stuffed by

Bladecaller. If they're still hungry for poultry after that, they've gotta fight through a raging

Featherstorm before finishing off the Rebel.

feather traps take time to set up, Xayah isn't as great as other ADCs at capitalizing on enemy mistakes and catching opponents off guard with a first strike. She prefers carefully preening her lane with

feathers, waiting for an aggressor to make the first move.

Xayah's lack of mobility forces her to lean heavily on

Bladecaller for self-peel, and any champ that can avoid the root will find it fairly easy to stick to her. The Rebel works best when she's safely behind

Rakan (or any other support) letting them tank any unwanted attention. 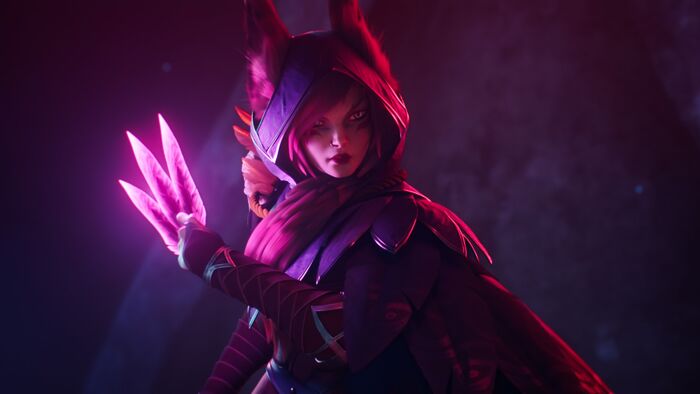 Hi everyone, Senior Animator Warren 'fluffynus' Goff here to give you some insight into Xayah's development from an animation perspective.

When building animation for new champs in League, we set out to accomplish two main things. The first is to clearly communicate gameplay; this includes the actual attack animation (and ability animation, death animation, etc.) as well as the feelings attached to them. The second is to define the personality of a champion by adding little quirks of their character into the game. In short, we want a champion's animations to be clear and satisfying when auto-attacking and using abilities, while also true to the persona of the character.

Xayah's rapid-paced gameplay and complex wing created some animation challenges: How can we make her movements look good, even when they happen quickly, while also showing off her feisty personality? 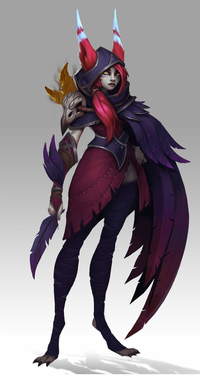 Xayah has low cooldowns late-game and scales well with attack speed, so we knew she'd eventually be jumping between spells and autos pretty quickly. Because of this, we explored a bunch of attack styles early on to find what synergized well with her kit and felt satisfying, even when rapidly flinging feathers. We also wanted Xayah's wing to look natural during her animations (regardless of the speed), adding another layer of complexity.

Things we learned from exploration:

With these learnings, we were able to start creating animations that looked and felt good, even at high speeds.

An Infinite Supply of Death Quills

We work at 30 frames per second when animating auto attacks and spells for League. Xayah's autos and abilities can be interrupted after about ten frames, which means we only have .33 seconds (ten frames) to anticipate and show the attack animation. Because of this, we have to be very specific about how we pose Xayah in each one of those ten frames. Her attack animations need to be distinct and obvious, so every player can recognize what she's doing, while also seeming agile and dangerous, so she's fun to play.

Xayah's overall character and shape language is sharp, so we decided to make her animations feel snappy and responsive and for her wing to act like a wing, rather than a lifeless cloth—this also reinforced her spitfire personality. Since Xayah (probably) builds attack speed and can cast spells between autos, we kept the blends between animations to zero. In other words, she can immediately move from one animation to the next, with no frames in between. This is something we normally avoid, but with Xayah, it helped her feel really responsive and quick-footed.

For Xayah's basic attacks, we wanted to make sure players could clearly see when she was about to auto, so we used a big anticipation pose and held it for five frames. After that, we popped into the actual attack and then the follow through.

All of this had to happen within ten frames:

Keeping the action to three main poses makes it more readable for players, as they first see the anticipation followed by the shift into actually throwing the quill.

Say That to My Feathers

Animating Xayah's wing was a huge challenge, and we tried quite a few designs and rigs before landing where we are now. The final version has 39 bones, which is nearly as many as some champion's have in their entire bodies, so animating her took a little longer than usual.

Controlling the shapes of her wing during fast actions was especially important because we didn't want it to seem stiff or unnatural—our goal was for Xayah's wing to feel like it was weighted and under her control, kind of like extra fingers. Even though the rest of Xayah's animations feel concise, the wing maintains a fluid-feeling throughout each motion before ending in a wing-like pose.

For example, during Xayah's ult animation we controlled the shape of her wing so it spun smoothly while Xayah launched into the air but still felt snappy when she unleashed her Featherstorm.

Animating Xayah's attacks, abilities, and wing took some experimentation before we landed on a set that has clear gameplay, feels satisfying to play, and captures her fiery personality. We're excited to finally see Xayah and Rakan together on the Rift, and we hope you guys enjoy the duo!

Behind The Scenes The Chase Begins EU Cosplay Showcase

Xayah Model Behind the Scenes

Retrieved from "https://leagueoflegends.fandom.com/wiki/Xayah/Development?oldid=3093069"
Community content is available under CC-BY-SA unless otherwise noted.