League of Legends Wiki
Register
Don't have an account?
Sign In
Advertisement
in: Lore of Ixtal, Short Story, Zyra lore 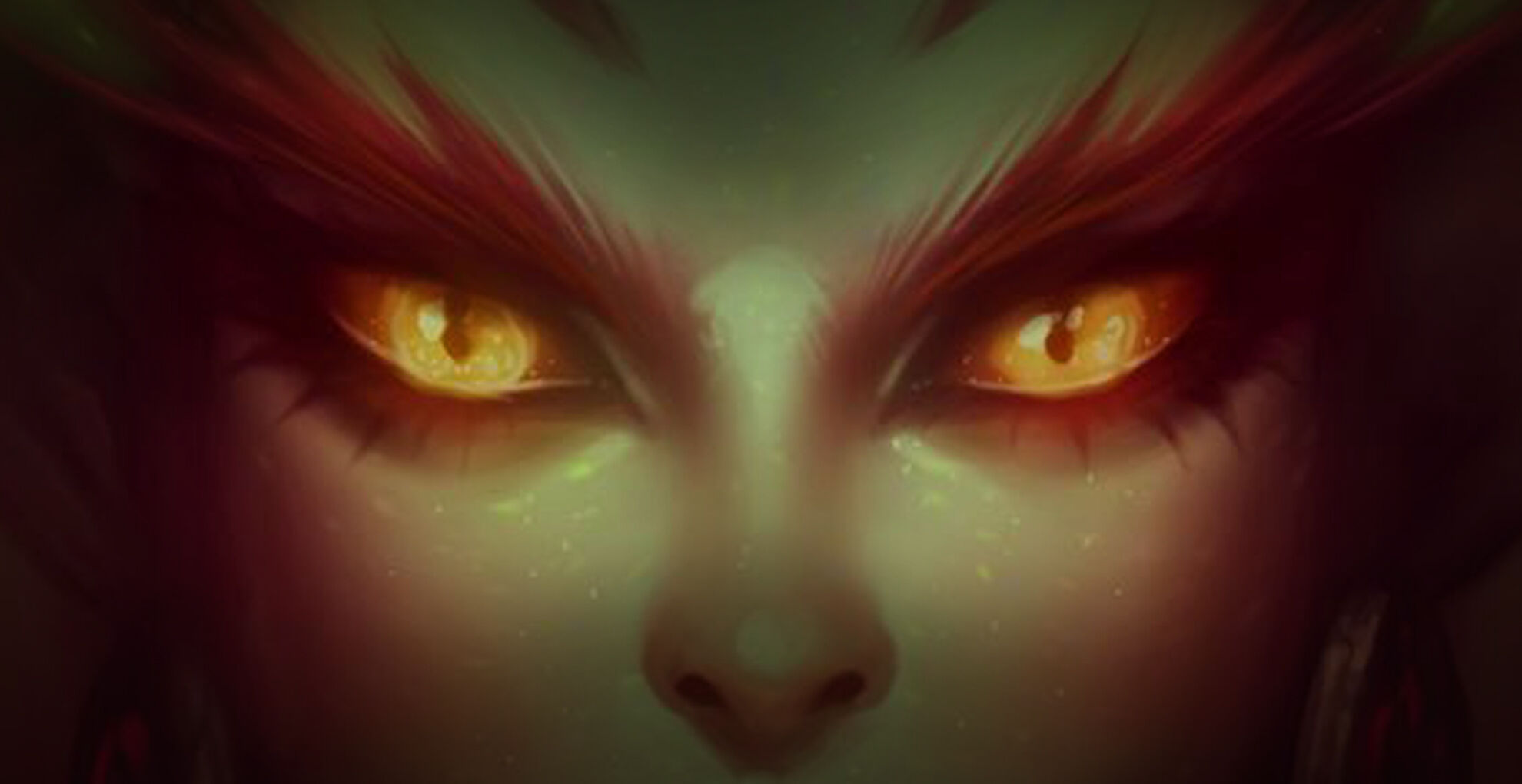 “Step into the garden that ever grows…” Zyra whispered through the stems and petals. “Death blossoms, and you don't want to miss the colors, do you?”

The humidity of Tonnika market and the crowd’s fragrant odor usually rushed buyers into hasty decisions, but Hatilly stood transfixed. Her eyes had fallen upon the strange, tangled bud encased with red withered leaves, a specimen she had never seen before.

“You don’t want that,” the old florist said. “It’s a rare Night-Blooming Zychid. Plucked from the southern jungles, where sunlight never touches the forest floor. It’s more for potion brewers or alchemists…”

The merchant directed her gaze to a bouquet of Sapphire Roses. “Now, these are from fair Ionia. Adapted them to our robust Kumangra soil myself… Or perhaps some Pearls of the Moon?”

Hatilly was not swayed. Sapphire Roses and Pearls of the Moon flashed their colors for any eyes to see. This zychid held exotic potential like the Kraken Lilies along the Serpentine Delta, or Parethan Corpse Tulips. Rare flowerings were precisely her and Cazworth’s type of indulgence.

The florist welcomed the gold pressed into his palm, despite the doubt scrawled across his face. He deftly cradled the bud in a nest of damp silk, and planted the parcel into Hatilly’s waiting hands. She noticed the aerial rootlets clinging to a shard of something hard and chalk-white.

“Zychids cling to foreign objects,” the merchant said. “That one’s grafted to a bit of bone.”

Cazworth was bent over his antique desk, scribbling notes in the margins of his ledger by candlelight. He didn’t look up until Hatilly set the ceramic upon his table. The strange zychid, half buried in a mound of wetted soil, already seemed happy, its reds and greens vibrant and slick with life.

“A budding gift for a blooming businessman.” She planted a kiss on Cazworth’s cheek, feeling clever. He smiled and turned to examine the specimen.

“When you said you needed flowers to brighten the place up, I assumed they’d be colorful.” Cazworth jabbed the plant with his quill. “What is this curious fellow?”

“A most extravagant gift to celebrate the opening of the upper Kumangra’s newest trading supplier… Cazworth’s Exotic Goods.”

Cazworth pulled his wife onto his lap.

“Well, if you say this is a rarity indeed, then we are in for a treat.”

He kissed her sweetly. A single petal opened up, unfolding into the darkening room.

“It’s beginning,” Hatilly said. “Will you be up all night?”

“Most likely. There are still several invoices that need rubber stamping—the partners still have concerns about the shipping lanes…”

“Don’t let me bore you, dear wife. Run along to bed. I’ll wake you when it starts to flower.”

Hatilly awoke to a creeping sensation on her ankle.

Infernal skitter-ants were everywhere, this near to the jungle. She kicked it away. Sleepily blinking, she turned to the empty pillow next to her. Cazworth hadn’t come to bed.

The nagging insect was undaunted, and was crawling further up her shin. She flung off the bedsheets and saw that there was no insect, but rather a tendril vine weaving through her toes, entangling her ankle, and twining around her leg.

Panic shoved sleep from her mind.

She kicked but could not get the green and red shoots to release her leg. They tightened, biting into her flesh. She pried them off with her fingernails. Her hands bled from thorny splinters.

The snaking stalks wound a trail from under the bed chamber door, where they sprouted aerial rootlets to climb the bed frame. Her mind immediately flashed to Cazworth.

Armed with a flickering lantern and a pair of sewing shears, Hatilly followed the vines through the hallway of their manse. Their circumference widened the closer she stepped toward its source, which she now saw was in Cazworth’s study.

The door took several tries to open. Hatilly hadn’t known what to expect, but it wasn’t this.

The room was covered, floor to ceiling, with floral growth. A riot of obscene colors danced in her lantern’s flicker. Exotic bulbs dangled from the walls, their finger-like leaves undulating as if drawing breath. Flowers seemed to mock her through the darkness, flashing their rainbow petals like signal fires. All had sprouted from a singular dark nexus: an enormous closed flower bud, which lay on the fainting couch by the fireplace, where Hatilly herself often read while Cazworth worked. Bits of ceramic and soil lay strewn about. The zychid had outgrown its habitat.

All manner of protrusion crept from its pulsating petals. Everything in Hatilly’s mind screamed for her to flee her home, put it to the torch, and burn that hideous bouquet. But not without Cazworth. Vines twisted around the legs of the chair, the legs of the study table, the legs of…

Still sitting in his chair, Cazworth was cocooned from head to toe by a writhing mass of leaves. Hatilly reached his side, bare feet slipping on the foliage underfoot. She cut frantically at the strangling vines, but each snip of the shears only made them tighten their grip and produce little thorns that pierced her and her husband. Blood trickled out. Where the drops landed, zychid blossoms burst forward to feed.

A stench filled the air, like a rotting corpse. With tears in her eyes, she turned her head toward the fainting couch, where the zychid bud was flowering.

The stench grew worse. Hatilly retched. The gargantuan petals peeled backward in colorful layers, revealing oblong petals of striking scarlet and deep green, garlanded in black tips, revealing a woman in place of the stamen. Her hair was red as blood. Her flesh like leaves. Vines and petals wreathed her in deadly beauty. Her eyes opened. They reminded Hatilly of a panther’s—narrow irises seeing only prey.

The woman who blossomed from the flower arose.

“You wish to prune me already?” the thing said, its deep voice ensnaring Hatilly.

“The bloom you longed to witness.”

The stench turned. Gone was the reek of death.

Hatilly inhaled sweet fragrances—orange blossoms, the aroma of Sapphire Roses, the fruity scent of Kraken Lilies, the musk of Pearls of the Moon, the delicate hints of wisteria. There were more, secret flowers, but she somehow knew their names—they smelled of colors her eyes never saw. A name formed in Hatilly’s mind…

“Thank you for the lovely garden,” Zyra said, nodding toward Cazworth’s remains. “You tended me well, but we need more sustenance. To make the soil here more… fertile.”

Hatilly saw visions of a world covered by a bouquet of colorful death. It was a beautiful riot of hues, soft and fluttering, choking cities. There were no graves, no war, no money… Hatilly was breathless. She didn’t even feel the vines pull her down, nor the thorns bury themselves in her flesh, rending her skin, spilling her blood.

“Step into the garden that ever grows…” Zyra whispered through the stems and petals. “Death blossoms, and you don’t want to miss the colors, do you?”

Hatilly did not respond, for she was with the flowers.
▲ TOP ▲