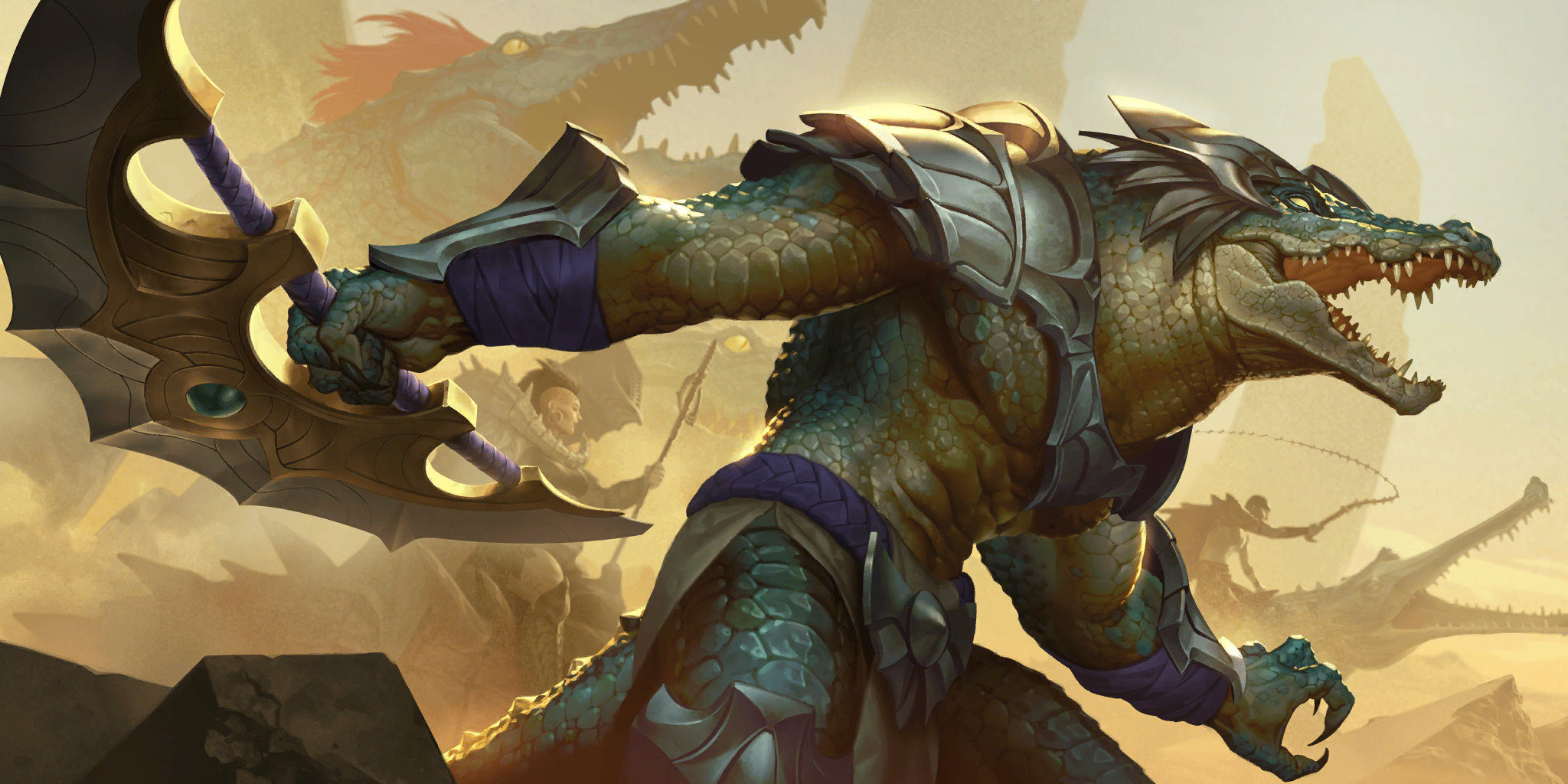 Firewood was precious in the desert, but the blackened ruins of Vekaura offered a plentiful supply of charred timbers to hurl on bonfires.

Firewood was precious in the desert, but the blackened ruins of Vekaura offered a plentiful supply of charred timbers to hurl on bonfires. The city had been a blasted ruin when the Sandthrashers rode through the ruins of its walls, its streets empty, its people vanished. None of them knew for sure who had razed it, but the captives they’d taken on the Marrowmark road told lurid tales of ancient gods whose anger had burned the city to ash and glass. Raz Bloodmane didn’t believe that, not really. Stories in Shurima were the currency of the oasis, the payment of the campfire—living things that grew and twisted with every retelling. No tale could pass from lips to ears without each teller adding some grisly detail, some exaggeration to make it their own. Gods do not walk the sands, only men and monsters. The Sandthrashers were a little of both. A reaver band of bloodthirsty warriors mounted on giant sauren lizards, they terrorized the dust roads of the Sai-Kahleek for coin, and hunted Shakkal marauders in the Valley of Song for amusement. With temperatures dropping in the south, their Preystalker, Sai-Surtha, had led the warband into the warmer north to raid the caravans in search of the newly risen capital in the heart of the great desert. Such caravans were ripe with fat merchants and priests, the desperate, and the gullible. Those foolish enough to believe that an

ancient emperor had arisen from his tomb to reclaim his lost empire rather than an earthquake had exposed a buried city. Easy pickings. The Sandthrashers were ambush predators, erupting from desert storms to raid in a frenzy of snapping jaws and stabbing spears. Any who fought back were hacked apart, and those that surrendered were fed to their hungry mounts. Raz grinned as the tethered sauren snapped and growled at the edge of the firelight—giant, reptilian beasts with long, razor-toothed jaws and flanks armored in sun-baked scales. Their ridged bellies hung low to the ground, worn hard by the sand, tails thrashing the dust that lay thick in this cursed city. Ghosts lurked everywhere in the ruins; echoes of the dying were freighted on the cold wind whistling through shattered stones, and silhouettes burned onto the walls like painted shadows. Something had happened here, something bad. Sai-Surtha tossed a splintered roof beam onto the main fire. Sparks flew into the night sky, coiling in firefly spirals before the reaver band’s leader. Raz was strong, but even he would have struggled to lift that beam. Yet the skull-masked vastaya hefted the heavy timber like it was a twig, its enormous weight nothing to his inhuman physique. Raz watched the sparks flicker briefly in the darkness before fading, sensing a significance that hung just out of reach. “Why do you look up?” asked Anukta, following his gaze. The scaled plates of her heavy armor rasped together as she moved, and her shaven head, bare but for a crimson mohawk, glistened with sweat. Her facial tattoos gleamed like exposed bone in the firelight. “The sparks,” he said. “They burn so bright, then fade to nothing in the blink of an eye.” “So?” He shrugged. “I don’t know. I just thought it might be significant. Like it meant something.” “You are a sage now? Like Ngozi?” “No,” said Raz, “not like him. But the sparks, they live, burn, and then are gone. Like us, like life. We are the sparks.” Anukta laughed, the ivory hoops punched through her ears shaking like drunken moons. “You are right, not like Ngozi at all. He was truly clever. You are just a loud fool.” Anger turned Raz’s features ruddy, and Anukta’s expression showed she knew she’d gone too far. Her head dropped and she fell to one knee, arms crossed over her chest, thumbs snapping to her palms. “Forgive me, Raz Bloodmane,” she said, knowing that as Sai-Surtha’s second-in-command, he could have her thrown into the long, tooth-filled mouths of the sauren pack. Or worse, fed to Ma’kara, the apex mount of Sai-Surtha. The sauren was a colossal beast, forty feet long and ridged with razored scales from its tail to its three enormous heads. Each elongated jaw was large enough to swallow a horse and teeming with hooked teeth stained rust-brown with blood. “This is the night before a hunt,” said Raz. “On such a night, only road-meat dies. Don’t make me change that custom.” Anukta nodded and rose, turning to where the latest captives huddled in the smashed remains of a grain store. They’d taken them on the northern dune roads from Kenethet, men and women claiming they were on a pilgrimage south to see the new emperor. Four had already been devoured by the sauren, and the five that remained were scrawny-looking things, hardly a morsel for the beasts. Well, four of them were—the fifth was an older man with a city dweller’s skin, a full set of teeth, and a girth that told Raz he’d never gone hungry. “That one,” he said, and Anukta hauled the man to his feet. His face was pale with fear, and Raz saw none of the other captives seemed to mind him being taken. “Please, don’t kill me,” said the man, with the boneless accent of the northern coasts. “I have money. I can get you much money. Please, gods, don’t feed me to the beasts!” “You’re too well fed to be a pilgrim,” said Raz, poking the man’s ample belly. “A pilgrim? No, no, I... I am...” Anukta jabbed the tip of her spear into his back. “You’re what? Out with it, fool!” “I am Ordan Stilava, Arch-Patriarch of the Melierax Temple of Bel'zhun,” said the man between heaving breaths. “I’ll get you anything you want. Just, please don’t kill me.” “A priest, huh?” said Raz, leaning in close and relishing the smell of fear washing off the man in waves. “I heard priests were pious servants of the gods. People to admire. You do not look like a man to admire, Ordan Stilava.” “Kill him,” said one of the remaining captives. “And make it slow.” Raz shrugged. “It looks like your companions don’t much like you either.” “He is a fat pig who took our money and said he would lead us south to

Azir!” spat the woman. “He feasted while we went hungry. When we begged for food, his guards beat us. Another day and he would have left us to starve to death in the Sai.” Raz knelt by the woman—wolf-lean with skin the color of dusk and fire in her eyes. “And who are you?” “I am Dalia, proud daughter of sand and sun.” “Water and shade to you, Dalia,” said Raz. “Show me your palms.” She held out her hands, bound at the wrist by rough ropes. He ran his fingertips around hardened patches of skin on her palm and along the edges of her thumb. “You’re no pilgrim either,” said Raz. “These are sword calluses.” She pulled her hands back. “What were you? Caravan guard, tomb-robber, mercenary?” “All three in my time.” Raz jerked his thumb over his shoulder. “You think I should feed him to the sauren?” “Yes. Feet first.” Raz laughed and drew his knife, a bone-bladed gutter he’d carved from one of Khesu’s splintered teeth. His sauren wasn’t nearly as big as Ma’kara and only had one head, but its teeth were just as long and just as sharp. “I like this one,” he said to Anukta, sawing the serrated edge of his blade through Dalia’s bindings. “Come.” She rose to her feet as Raz turned and dragged the protesting Ordan Stilava away. “Do as he says and you might live,” said Anukta with a lopsided grin.

It walked upright like a man, but there the similarities ended. Hunched, yet still half a head taller than Sai-Surtha, with a thick tail dragging behind it. Clad in dust-caked armor of dull gold and rusted bronze. Eyes of jaundiced yellow, rugose flesh of green and ochre. Blood drooling between dagger-like teeth in red ropes. Its mighty head was bowed, the crocodilian snout sniffing for fresh meat. Raz knew this creature. He’d seen hislikeness carved into sunken temple walls, had etched it into the blade of his own spear. He’d heard his name spoken in hushed whispers around the oases. The eyeless makhru, the wandering true-speakers who were said to talk with the spirits of the ancients, told cautionary tales of this god’s exploits to warn against unchecked aggression. “The herald of Azir...” said Anukta, her head held high in awed wonder. “

Renekton...” said Dalia. The giant snapped his head toward her at the name, sliding a huge crescent blade from his back. Such a weapon could cleave a skallashi in two. “Where. Is. He?” demanded the god. His voice was rasping and dry, raw from an eternity of screaming. Despite the sheer power of the god’s presence, Dalia remained unbowed, defiant in the face of his unimaginable power. In contrast, the sauren pressed their bellies to the sand, eyes rolled back in submission and the low rumbling in their throats stilled. Even Ma’kara lowered its three-headed body to the ground, something Raz never dreamed he’d see. He forgot the pain in his side as he resisted the urge to drop in awe alongside them. His lip curled in contempt as he saw the Sandthrashers gathered around the battle circle were kneeling. Submission was for the weak; respect was only ever earned in blood. The creature stalked forward as though oblivious to the warriors’ presence. Only when Sai-Surtha descended from his throne did he deign to look up and acknowledge them. “I am Sai-Surtha, Preystalker of the Sandthrashers,” said the vastaya, unhooking his sauren-scale shield from Ma’kara’s saddle. “How is it you dare to enter my city and kill blood of my blood?” Renekton looked around at the ruins, blinking, as if only now seeing its devastation. “This is your city?” he said. “For tonight it is,” said Sai-Surtha, drawing his falcata, a blade almost the equal of the god’s weapon, and stepping into the battle circle. “Then you must know where he is,” said Renekton, joining Sai-Surtha in the circle as though this were some pre-ordained rite. “Rulers must know all, see all! All the whispering liars. Honeyed words and falsehoods. I heard them. No one listened. No one ever listens to Renekton...” Raz backed away, joining Anukta and Dalia beyond the reach of the circling warriors. Renekton’s words made no sense, and he had no desire to be nearer to these giants than was necessary. “Who is it you seek?” asked Sai-Surtha, the falcata spinning in his grip. “The betrayer!” bellowed Renekton, the corded muscles at his neck spasming. “My faithless

brother! Tell me where he is or you will know agony.” Sai-Surtha laughed, a booming sound that echoed from the toppled walls of Vekaura. The Preystalker was a being of colossal appetites, and took his pleasures wherever he found them. Raz saw him eyeing Renekton’s physique, his hunter’s eye seeking out weaknesses and vulnerabilities. “The Jackal?” said Sai-Surtha. “

Lore and Events
Retrieved from "https://leagueoflegends.fandom.com/wiki/With_Teeth?oldid=3235981"
Community content is available under CC-BY-SA unless otherwise noted.