Runeterra Prime
Wildclaws are a type of large carnivorous felines that live in the Freljord.

While they share common traits with other larger felines, their unique feature is their additional pair of front legs. Alpha Wildclaws are considered to have the power of a warhorse and the thoughtless savagery of a cat.[1]

While the animals live in wild packs, some wildclaws can be trained and ridden as mounts. The

Winter's Claw is known for using wildclaws as mounts, such as the one used by 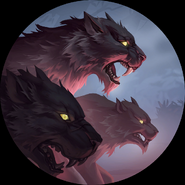