Westerley is a peninsula at the west most part of Demacia. 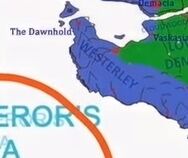