Residing in a secluded temple at the edge of the Corban Sea, Soterios the self-named High Priest became notorious in the surrounding area for his daily Rituals of Rebirth which he performed on the fearful townsfolk. The Ritual of Rebirth consisted of Soterios dragging a screaming innocent to the shore, and forcing them below the thrashing waves until water filled the poor soul's lungs and he was rendered unconscious. Soterios would then proceed to then Rebirth the lost man by bringing him back to shore, and pressing his holy hands upon the victim's chest until he was brought back choking and coughing, reborn into the world as acolytes to the High Priest.

For years Soterios conducted his Rituals of Rebirth unchallenged. Grown fanatical in his success with the Rituals, Soterios was sure in his belief that his own Rebirth would result in a divine transformation of his body, elevating him to an even higher level of power.

At a command from Soterios, his acolytes lowered the High Priest into the cold, dark sea. Unfortunately, his Rebirth did not go as planned and as water filled his lungs, the dying High Priest made one last plea to the higher powers. Reborn by the Immortals, he renamed himself Well, the Hydrosoul, and lives only to do their bidding.

A post in the Turkish forums requested for an 'all water using character' and asked if Riot had the technology for the effects. Since then there were no following announcements or related posts, which turned Well into nothing more than a rumor. However, despite files for both his visuals and abilities being found in the beta files, Colt 'Ezreal' Hallam eventually confirmed Well was effectively canceled.

The presented information is extracted from Closed Beta 1 (25-Mar-2009), where he is internally referred as "Water Wizard". There are minor wording adjustments for this presentation.

Active: A column of water crashes through enemies in a line, dealing damage.

Active: Well creates a vortex of water at a target location that deals damage every second. Enemy moving away from the Vortex are

slowed by 90%. Enemies moving perpendicular to the Vortex are

Active: Creates a heavy downpour that covers the entire map. Increases friendly units' Health and Mana regeneration, and all allied 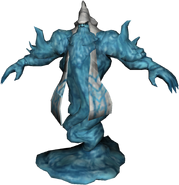