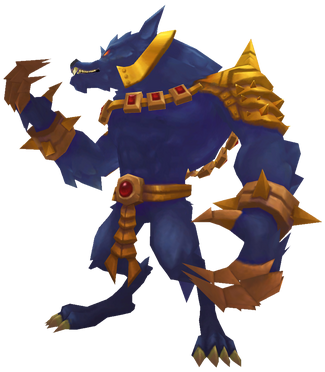 "Eventually the beast catches up with all of us." -

Warwick was once a man revered for his ability to track down human specimens for the darkest types of scientific research. When his ambitions exceeded his physical limits, he drank a dangerous elixir to transform himself into an unstoppable manhunter. His newfound strength bore a heavy price.

Before his transformation, Warwick found his calling in Zaun as a 'procurer' of human test subjects. Known for his crafty methods and ruthless determination, people regarded him with a cautious mixture of fear and respect. As his reputation grew, so did the demands placed upon him. His clients wanted more rare and dangerous specimens, and they wanted them sooner. To meet their demands, Warwick needed strength that transcended his limited human form.

Singed, devised a powerful formula. The recipe called for three critical components: silver from the Shadow Isles, the fang of a Balefire dire wolf, and the heart of a celestial being. Warwick tracked down the first two in short order, but the third proved a much greater challenge. He traveled to Ionia to trap

Soraka, a creature believed to be a child of the stars, but she discovered his ploy and drove him away with powerful magic. Unable to tolerate his failure, Warwick returned to Singed disfigured and furious. He demanded the chemist's incomplete potion, but Singed warned him that the results would be unpredictable. Ignoring his friend's warning, Warwick drank the concoction.

The brew transformed him into a creature both man and wolf, infusing him with raw strength and heightened

senses. Exhilarated, he immediately began testing his newfound power. Each day his instincts became sharper, but his human half slipped further away. He could feel himself losing control: though he always got his prey, he often failed to bring them back alive. Now he seeks the heart of Soraka to stabilize his transformation before his mind gives way to the feral urges of the beast. 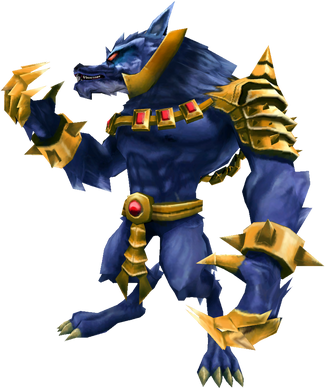 "The rage of the beast now complements his predatory spirit." -

Singed, the Mad Chemist, upon witnessing his master's transformation

Warwick counted himself amongst the most powerful and revered men in his home city-state of Zaun. Over the course of his infamous career as an alchemist, Warwick won many honors for his craft, not the least of which was a lucrative offer for service in the Noxian military during their campaigns against Ionia.

Sequestered in his labs far from the front lines, Warwick and his apprentice Singed toiled relentlessly to manufacture all manner of appalling concoctions for the Noxian army. So potent was his art that even the greatest of Ionia's healers - under the leadership of the Starchild

Soraka - struggled to combat the poisons and chemical weapons generated by his despicable mind.

Warwick's reign of terror grew so horrific that his very name became a curse in the eyes of his Ionian foes, and they began referring to him only as 'the Deathmaker'. But even one under the protection of the Noxian High Command is not wholly beyond the reach of retribution. For as Soraka strode across the myriad of death and destruction left in the wake of one of Warwick's chemical attacks, her heart finally gave way. She called down the wrath of the cosmos on Warwick, wishing that his form should mirror the cruelty in his heart - a curse that would come at the price of her aspiring

Within his laboratory, a terrible thirst took hold over Warwick. As his apprentice looked on in horror, Warwick threw open the doors to his bastion and sprinted off towards parts unknown, a bloodcurdling howling marking his passage. He had become a werewolf; a wild, murderous beast. Today, the Blood Hunter fights for Noxus within the League of Legends... thankful of the curse that his now-mortal enemy bestowed upon him.

Though Warwick has been physically transformed, his nature has not; he is still a predator.

Once a man, Warwick was trained by the Alchemists of Zaun and later hired as a mercenary by the Noxian Army for their war against Ionia. An alchemical genius, he became known to the Ionians as the Deathmaker for the terror and destruction his creations sowed. Sequestered in his labs, he felt no responsibility for the death tolls these creations wrought. Eventually Soraka, an Ionian with the power of gods in her blood, had seen enough of the alchemist's predations. Something in her snapped, and she sacrificed her divinity to curse Warwick. She wanted him to feel revulsion at what he was, for him to dip his fingers in the blood he so often shed. Soraka cursed him to be a werewolf, a wild murderous beast. 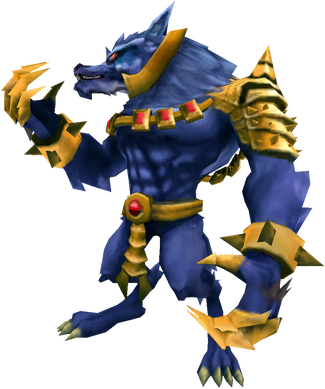 Warwick was once a brutal mercenary, trained as a chemical weapons engineer by the Alchemists of Zaun. He barely escaped with his life after his unit was wiped out while defending an Ionian citadel. Outnumbered a hundred to one, he holed up in an abandoned mine, and set to work concocting a chemical potion that would give him the strength and power to beat the odds. Knowing he didn't have much time, Warwick frantically finished his elixir, but he had no way to test it before using it. Swallowing the unguent in giant gulps, Warwick howled in pain as his body contorted. His arms grew huge and strong. His fingers sprouted massive claws, his head horns, and his skin became dark as coal. And inside a hunger grew, a thirst for blood that had never before existed. Needless to say, it was not he who lost his life that day.

Upon return, Warwick's transformation allowed him to excel as a mercenary, and his infamy spread near and far. He is now desir...

Eternal Thirst is an on-hit effect.

Hungering Strike is a unit-targeted ability.

Hunter's Call is a point-blank area of effect.

Blood Scent is a toggle with a self-targeted buff component.

Infinite Duress is a unit-targeted blink.

Each of these skins feature some additional quotes and interactions, but otherwise use the Classic voiceover. Some Classic voicelines may also be disabled while using alternate skins.

Retrieved from "https://leagueoflegends.fandom.com/wiki/Warwick/History?oldid=2989429"
Community content is available under CC-BY-SA unless otherwise noted.