Zombie Wards placed by the summoner.

Ward skins were initially released as a 7-day rental that you could stack up to 52 times, with all active rentals running concurrently. Some of the original ward skins were also available for

Influence Point. However, in the year following their initial release Riot opted to turn them into permanent cosmetics.

The following wards are available, temporarily during specific events or promotions, in the store or as loot via Hextech Crafting or from Honor Capsules. It is only during these events that you may purchase them with Hextech Gemstones, have a chance to obtain the Ward Skin Shard or Ward Skin Permanent from a Chest or Capsule, or by rerolling 3 Ward Skin Shards.

These ward skins are unavailable and will not return.

For the end of Season four rewards, Riot awarded players who participated in ranked team play with special ward skins based on how many points they acquired at the end of the season. A player scores 1 point for a 3v3 ranked team win and 3 points for a 5v5 ranked team win.

Ward skins first appeared during the 2012 Harrowing seasonal event, and the five new ward skins were put on sale for rent only and not permanent. Some of the wards were purchasable for a small amount of

Influence Point while others were made obtainable with

RP. Riot was just introducing the new idea of ward skins and listened intently to the feedback (that proved to be negative) for future ward skins.

We're excited to announce ward skins, a new customization option that allows you to change the appearance of your Sight and Vision Wards on the Fields of Justice. In keeping with the season, these ward skins are inspired by the haunting guise of the Shadow Isles. Activating a ward skin will transform your wards into ghosts, spooky trees, spiders, creepy stone statues, or pumpkin-headed bats with their own unique visual effects, sounds, and animations.

Here's how they work. When you purchase a specific ward skin from the Wards tab of the League of Legends Store, it gets added to your inventory for one week. You can activate a specific ward skin to change the appearance of your wards in game. You can keep up to a year's worth (52 weeks) of ward skins in your inventory at a time, so don't hesitate to stock up if you have a favorite. Ward skins function the same as a regular Sight or Vision ward.

Here are the first five ward skins available to unlock:

After receiving the negative feedback from players voicing their objection against having to spend points on a ward skin that won't be permanent on their account, ward skins were made free to use for upcoming events. However, they were only available for use during the following seasonal event and removed once they were over.

On October 1, 2013, Riot introduced the first permanent and champion- based ward skins.Announcement made by RiotWenceslaus[2]

If you've been hankering for some new ward skins, we've got some good news for you. The first run of permanent, non-seasonal wards is now hot off the presses into the League of Legends store.

To help you rep a trio of your favorite champs wherever you're laning, these new ward skins are all themed after members of the League of Legends lineup. You'll find them in the wards tab of the store for 640 RP once the new patch lands:

It's a good day to buy a Sight Stone, summoners. Happy warding, and we'll see you on the Fields of Justice.

For the Harrowing event of 2013, the five holiday ward skins from the previous year saw their return to the store. This time they were free to use during the event and purchasable for

The assortment of Seasonal Rewards that players could receive had something new to offer in Season 3. As the season came to a close on November 12, 2013, Riot awarded summoners who achieved a ranking of Silver or higher the exclusive Victorious Ward Skin - the was first ward skin to be offered as a prize.[4] 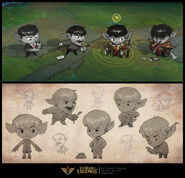