League of Legends Wiki
Register
Don't have an account?
Sign In
Advertisement
in: Lore of Demacia, Lore of Runeterra, Short Story, Fiddlesticks lore 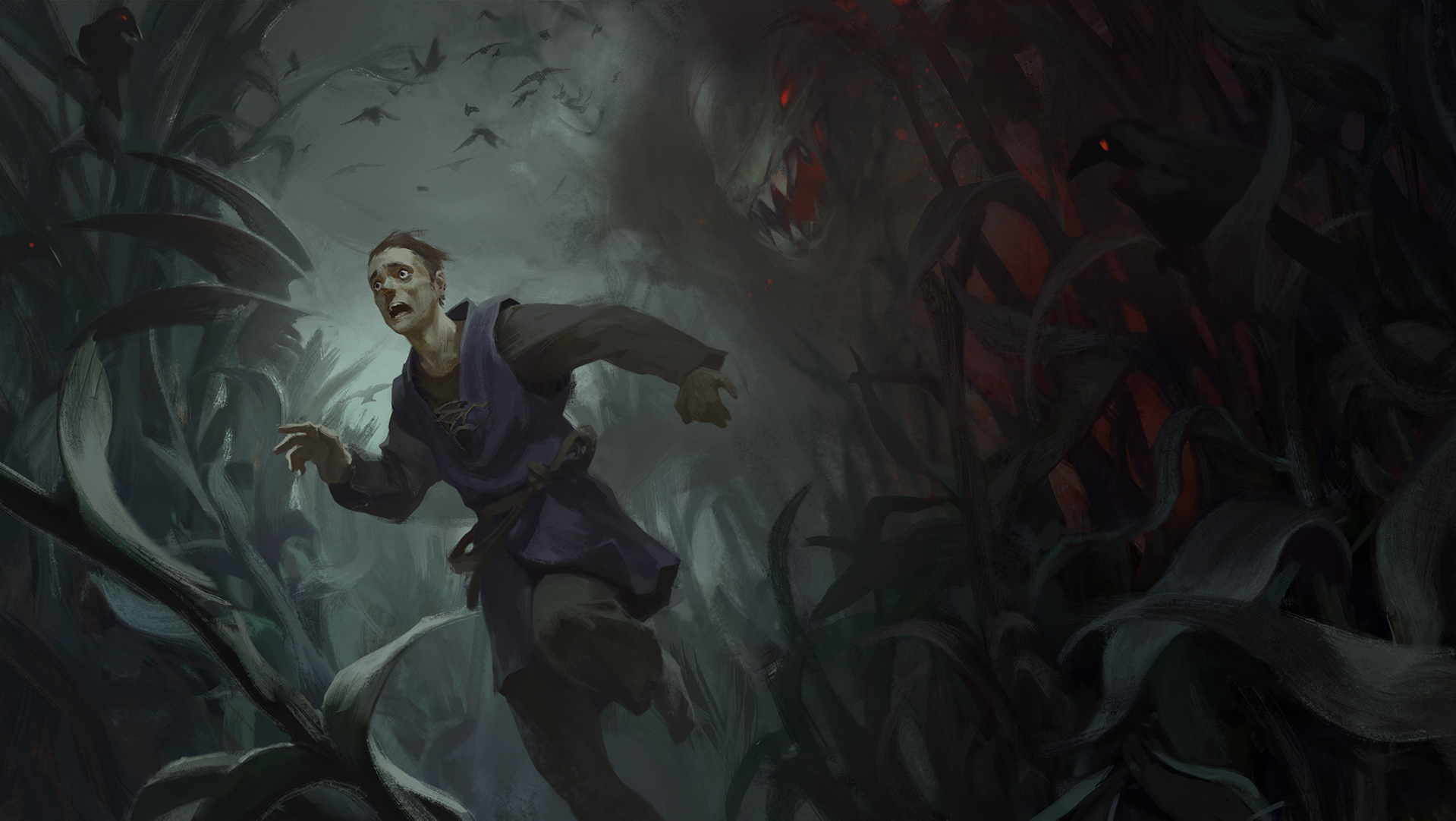 One left to scratch upon their mounds,

The crow, alive and dead.

It started when old Hubard, drunk out his mind on stale mead and the dulled memories of some battle he’d probably run from, locked himself in a shack just outside of Goldweald. Davil tried to break the door in, good neighbor as he was, but the miserable fossil had more strength than anyone could have anticipated, bracing his entire body against the entrance as he babbled about heights and spiders and being pecked to

death by birds. No one believed the man was being pecked to death by anything but a bottle, so we all went home, assuming, as one does, that with a day to dry out, the ordeal would sort itself.

Took only one night.

First scream ripped across the village like someone had pulled it out of Hubard’s open chest, followed by a second that was almost the same—but worse. It pitched higher, like

rusted metal wrapped in burlap, in almost-human words with an almost-human rhythm until the baker’s wife cried, “Mages!” and all hell broke loose. People arming themselves, the mayor—if that's what you could call the head of some hinterlands piss-hole—shooing whoever he could into the meeting hall, windows being boarded up in blind panic, the works. You’ve seen it a hundred times, probably two hundred since the Claw hit up north. Regular folks going mad at the fairest hint of magic.

Point is, that’s around when everything went bad. But there’s a bottom to bad, and what happened in Goldweald broke right past it.

Go for yourself. Goldweald ain’t there anymore.

But I’m skipping ahead, and that ain’t fair to Davil. See, Davil was a spy from back when the

Freljord pacifications were still talked about like there was honor in ’em, and he later served the crown as far out as

Shurima and the Blue Flame Isles. The man had seen things. We’re lucky out west, since the worst the hinterlands have to offer are some stray raptors after the hatching season, and maybe a sun-cooked bandit or three, but Davil knew what was out there. What could be out there. And he gathered up all the folk who were willing to listen and organized a peasant militia to bring those supposed “mages” to justice.

His plan was simple: First light, we’re all going on patrol, two by two, no one alone. Military stuff, and that gives us hope, gins us all up for a fight. For king and country! Rah-rah

Demacia, and all that.

Until the sun comes up and a family’s gone missing.

Every one of them—five in all. Farmhouse torn to shreds, livestock slaughtered in their pens. Doors all locked from the inside, windows all latched. They’re gone. The mayor calls a meeting, but a pair of fieldhands don’t come in from the rows. When Davil calls for them, something calls back. But it isn’t them. Sounds almost like them, like something is forcing words into almost the right shape, but that old, rusty cage sound keeps cutting through, squeaking and rattling and clicking like it can’t help itself.

Now people are afraid. Some hothead charges into the fields with a sword in his hand—gone. Another follows him—gone. Blacksmith gets the wise idea he’ll ride all the way to Amberfel and call the guard, but the horse bucks him halfway down the old trade road and something pulls him into the rows. Davil calls to see if he’s alright, and that awful voice burbles out, saying it’ll take the road to Amberfel and call the guard.

Davil asks again, and it repeats: “I’ll take the old road to Amberfel and call the guard.”

There’s something about it… like a pin twisting inside your head, poking through the meat into something darker underneath. I could see it on everyone’s faces. Folks holding their kids close, backing away toward their homes, some just running. That voice could cut away all the parts of a person and leave ’em naked and afraid, shivering in the middle of a blistering afternoon. Like it was pulling something out of you. Something it wanted.

A little girl says she saw someone standing above the field out where we keep the scarecrow. It’s such an odd thing to notice, and there’s so much going on, that we pay her no mind.

But we should have.

Night comes and half the houses in town are boarded shut. You can hear folks inside whispering, muttering, giggling like maniacs, but about… I’m not sure. Snakes. Lightning. The dark. Walls closing in. Knives. The sea. They’re laughing and they’re screaming and it sounds like everyone has gone insane, like they’re trapped inside a room with a part of themselves they don’t want to face. It sounds like we’re all stuck in a nightmare.

Then the lights start going out. One after the other in all the boarded-up houses, the lamps flicker and die. And the voices melt away, each suddenly silenced, all save for one. Something croaking behind the old smithy. Muttering to itself. About snakes. About lighting. Muttering about the dark.

Davil, that poor fool, takes the militia and goes in. And I… I’m there with him. I have my blade. I have my lantern. But the rows are deep, and the light casts shadows everywhere you look.

I… I don’t know exactly what happened. I saw a face—maybe. Something looking back at me just ahead of Davil, but it was like he saw right past it. Like that face was just there for me. All lopsided, twisted sackcloth and rusted teeth. And behind it… something huge. Splayed out on thin legs, but alive with hundreds of black birds rattling inside an old cage we’d thrown into the woods last year. And eyes. So many eyes.

There’s no one left in Goldweald now. If no one came after me… I’m the only one left. Hearing those screams fade behind me as crimson light poured out from between the corn stalks—that sickly crunching, and the bellowing, tortured squeals of hogs and horses…

crows! Hundreds of them—thousands! But crows they aren’t, can’t you see? They’re smoke and fire! They’re not real! They couldn’t be real…

They follow that voice! The deep, rumbling voice beneath it all! Don’t you see? Don’t you—

Oh, gods… Davil! I left him behind! I left him there—there in the rows with that horrible scarecrow! Everyone—they’re all dead! Gods, gods, it must have followed me. Once it tastes your fear, once it knows you, it never lets go. It won’t let you go, it won’t—

You don’t hear it?