If you're like me and you've ever gone through one of those dark, goth phases at some point in your life, you'll probably relate to this next champion at least a little bit. Meet

Vladimir, the Crimson Reaper. This champion combines the epic power of fueling his magic with the blood of his enemies with the style and flair of Transylvanian count. You know the type of count we're talking about: the type that has a lifetime supply of liquid black eyeliner sitting in his medicine cabinet. So dust off that copy of Bram Stoker's Dracula that you've got sitting on your nightstand. If you start reading now, you should be super excited by the prospect of getting your hands on Vladimir by the time you finish.

The Rivers Shall Run Red

An ominous force has appeared on the Fields of Justice. A spectator caught this glimpse in a recent battle, but officials are unsure of what to make of it. What's clear, though, is that whatever it is should not to be taken lightly. Take a look for yourself, summoner! 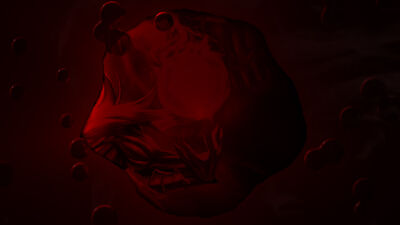 The Blood Lord is on the March!

The Blood Lord is coming to the League of Legends! In addition to a new and intimidating model, this legendary take on

Vladimir, the Crimson Reaper, will feature vicious new voice over, spell effects, and animations. If you'd like to indulge your dark side by living out fantasies of holding the lives of your enemies in the palm of your hand,

Blood Lord Vladimir should help slake that thirst! Nothing is sweeter than the blood of your enemies!

sustain-focused blood mage, but we're dialing up his ability to tap into health to wreak havoc.[4]

Crimson Rush for a few seconds the next time Transfusion is available to cast, granting him bonus movement speed and bonus damage.

Vladimir sinks into a pool of blood, becoming untargetable for a couple seconds. Additionally, enemies in the pool are

slowed and Vladimir siphons life from them.

Vladimir charges up a reservoir of blood, paying a large portion of his maximum health over a period of time to increase Tides of Blood's damage. On release, or after a couple seconds, Vladimir unleashes a sphere of blood, dealing magic damage. At full charge, Tides of Blood

slows Vladimir while he holds it, and will briefly

slow targets when he releases it.

Vladimir infects an area with a virulent plague. Affected enemies take increased damage for the duration. Hemoplague deals additional magic damage after a few seconds to infected enemies and heals Vladimir for each enemy hit.

I Laugh At You!

Retrieved from "https://leagueoflegends.fandom.com/wiki/Vladimir/Development?oldid=3090132"
Community content is available under CC-BY-SA unless otherwise noted.