Vilemaw is a giant, magical arachnoid being that resides in the

Resembling a spider whose grotesque mass is furred and scabbed with wet, mutant growths. Adorned with venomous fangs and colossal legs used to heave its corrupt body. This unearthly horror is a monstrous creature that looms in the darkest pits beneath the Shadow Isles. The true origin of

Vilemaw is completely unknown, save for the assumption that the voracious spider god is an otherworldly life-form not originally from the

It has great physical strength as well as magical, being able to transfigure 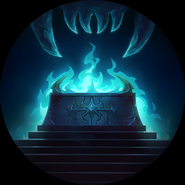