Viktor was discovered ahead of his announcement by examination of data in the "Ahri" patch. This discovery included full stats, models, and backstory. 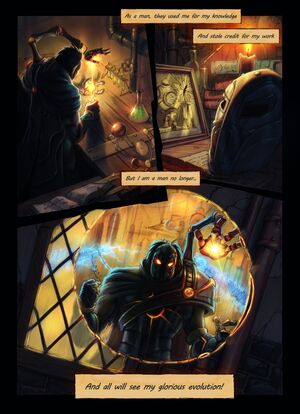 If you've ever perused a book on ethics, you know that it's important to give credit where credit is due. This happens to be especially important when mad scientists are involved. Hypothetically, if you were to construct a Great Steam Golem only to find that some other scientific type had claimed your creation as his own, it might cause you to come a bit more unhinged.

Viktor, the Machine Herald. Not only is he the scientist who invented

Blitzcrank, but he also had his creation usurped by his fiendish professor. Now, people cope with grief in different ways. Some people cry, some people binge, and some people start replacing their body parts with robotic limbs. I guess we'll leave it up to you to decide how you think Viktor deals with his problems. 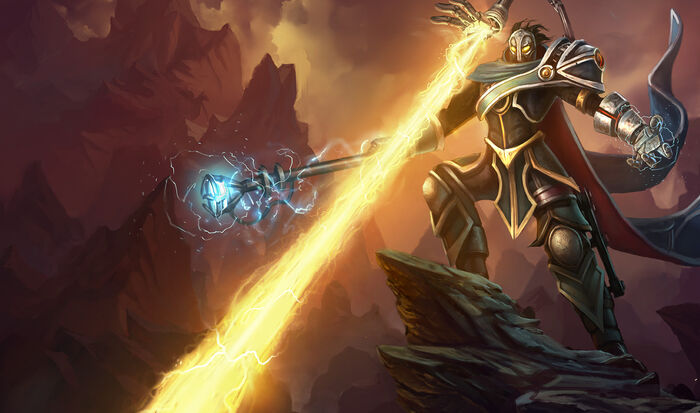 Viktor is a ranged mage with a mix of

re-positional damage. This versatility is further augmented by his unique

passive: a permanent item with different upgrade paths providing Viktor with both increased stats and bonus effects on one of his abilities. This high-skill cap mage is the perfect choice for those who wish to gain the advantage via their strategic decision making.

Viktor starts with a

Hex Core that provides him with stats and can be upgraded in the store to augment one of his abilities. The Hex Core can only be upgraded once, and cannot be sold back to the store.

magic damage, returning a portion of the damage dealt as a

slowing all enemies and stacking a debuff every 0.5 seconds. At 3 stacks enemies inside are

Viktor uses his robotic arm to fire a chaos beam that cuts across the field in a line, dealing damage to any opponents struck in its path.

Viktor conjures a singularity on the field which deals

silences enemies. The singularity then does magic damage to all nearby enemies every second. Viktor can 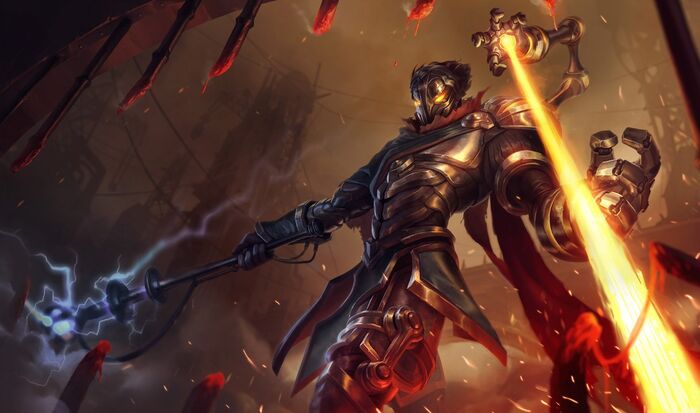 Proving it's not just League's exoskeletal beings that can evolve, we're pushing a retooled

Viktor through the Champion Update pipeline and onto live. We've given him a fresh coat of paint, updated most of his abilities, and completely changed how his passive and Hex Core work - behold the details of Viktor's glorious evolution!

Viktor begins the game with a

Hex Core, a unique item that can be upgraded three times during the course of the game.

Viktor creates a gravitational field at a target location,

slowing all non-friendly units inside it. The field triggers after a few seconds,

sucks all caught enemies toward its center as it triggers.

Viktor fires a beam of energy across the battleground, damaging all enemies caught.

Augment: Aftershock – The beam of energy explodes a moment after being cast, dealing a further round of damage. Enemies caught by both rounds take reduced damage from the explosion.

Viktor creates an electrical storm at a target location that interrupts all nearby enemy channels and deals damage over time to all caught targets. Viktor can move the storm at will, though it loses movement speed as it travels farther from him.

Viktor's augments offer him unique ways to tailor his kit towards specific playstyles and situations. If the enemy team's built for skirmishing, Viktor can augment

Siphon Power to speed him out of combat, or

Death Ray to create zones of denial around his or the enemy's team. On the other hand, if his team has the makings of a wombo combo comp, Viktor can augment

Gravity Field to cluster the enemy team together, opening the door for his team's successive cycle of violence. Most importantly, these augments can be used together once Viktor has spent the required gold, giving him plenty of extra ability power, mana, and utility. Finally, once Viktor augments all three of his basic abilities, he automatically augments

Chaos Storm with the Velocity upgrade.

Viktor's a sustained damage mage who thrives in the solo lanes of Summoner's Rift. He trades effectively with

Siphon Power, taking advantage of the shield to absorb his lane opponent's assault as he deals his initial salvo. Crucially, Viktor wins hardest by staying close to his enemy following Siphon Power, triggering the Lich Bane-level boost on his next basic attack to inflict further damage. With clever positioning, Viktor can follow up with

Death Ray to last hit minions and whittle down the enemy champion even more. However, the ability's raw power often pushes the lane, forcing the relatively immobile Viktor far from his tower. If this attracts the enemy jungler's attention, Viktor has another hex-tech trick up his sleeve in the shape of

Gravity Field, which he can place along his escape path to deter his aggressors.

Chaos Storm thrives once teams start grouping together, giving Viktor the chance to wreak en masse carnage. Though unleashing it after an augmented

So, why Viktor? Seems pretty clear, right? He's not League's most popular champion, and his unique tools aren't great. But before we started tinkering, we set out some clear problem areas and goals for the update. Here's what we ended up with.

First, we wanted to update Viktor so he fundamentally achieved his design fantasy of an evolving and customizable creator. Old Viktor frankly failed at this fantasy: he had one solid upgrade path, two crappy ones, and could only augment himself once through the course of the game. We wanted to recreate the creator's creative side, and decided to take him back to the drawing board for a fundamental update to his augment system.

So where did we start? Well, instead of just making each augment equally viable, we decided to overhaul the entire system and allow Viktor players to augment each of his basic abilities through the course of the game. There's no level gate – only gold, so while you could theoretically augment all of his abilities before buying a single item, it's down to the player to decide when, how and even if they'll spend their hard-earned gold on augments.

And what about those augments? Well, first off, each upgrade gives flat AP and mana, so they most definitely improve the big metal man. Secondly, the ability improvements aren't all “ermagerd ma ferce ers meltin” powerful - but that's not the point. They're situational, so you can tailor your abilities to press your advantages or relieve your team's weaknesses as the game ebbs and flows. Essentially, you can customize your Viktor when and how you see fit.

Siphon Power, for instance, had the shortest range and gave Viktor a speed boost and shield, letting him... run away after dealing damage? To help remedy this, we gave

Gravity Field) extra range, so he can now use his abilities together and better define the range at which he fights. We also added an

Siphon Power, so Viktor players can now choose what to do after using their

empowered basic attack. Ultimately, by standardizing the range of Viktor's abilities and giving him more reasons to cycle in his basic attacks between ability casts, we're hoping to create a more cohesive and interactive champion. 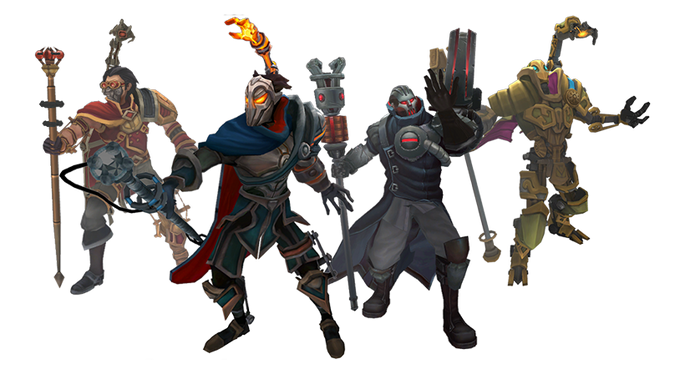 That's about it for now! New Viktor should have smoother gameplay, a compelling

unique item, and feel more like the improvable being he was made to be. Give him a go and let us know what you think of him! Otherwise, head over to the

Soraka Update article for more news from the Champion Update team! If that doesn't scratch your itch, then hang tight – we have some pretty... big... news coming.

This is about a character design for League of Legends.
https://web.archive.org/web/0/http://na.leagueoflegends.com/

I've decided to post some of the development work for both his concept and the illustration, to give people an idea of different options to show.

Viktor is a villain type character. This is a version of him (called a reskin, which is not a new texture but a whole new mesh based on the same rig).

Fullmachine is the "evolved" version of

Viktor, in which he has finally replaced his entire body with machinery.

Here is some text from the brief:

After years of perfecting his augmentations, Viktor has succeeded in fusing his soul with an efficient magical humanoid machine. He is made entirely of various metals, and no organic materials. Magic is bursting from within him, and his design is a lot more refined, while retaining the fantasy grungy feel.

So the challenge is to make it a scifi-theme, but with more of a fantasy aesthetic. So... steampunk! :D

So, the next order of business was the splash. Splash art is used to promote new characters and their skin variations on Riot's website. It's also a big part of their store. They're important because the game makes its money on these microtransactions. The left side has to be low contrast and somewhat negative space since that's where the character's info box goes.

This skin shows the future of

Viktor, where he has replaced all of his humanity with machinery. He is "complete". He should be portrayed standing grand and majestically, Lord of the machines! In the background is something almost like a throne room made of hextechnological machinery. The technology in the background should follow a similar style to what you see in his costume design, kinda chunky and heavy and not too sleek or hightech.

So again, the challenge is to create a setting that is both science fiction and fantasy at the same time.

They chose Thumb B.

So I ran with rendering up B.

So anyway, there you have it.

Retrieved from "https://leagueoflegends.fandom.com/wiki/Viktor/Development?oldid=3075987"
Community content is available under CC-BY-SA unless otherwise noted.