There's nothing more satisfying than the sounds of your enemies succumbing to an extreme beat-down. Not to

Vi, anyway, the newest champion to join the League. Punching,

armor-busting brutality are what she's all about.

Vi charges a shield over time. The shield can be activated by hitting an enemy with an ability.

Vi charges her gauntlets and unleashes a vault-shattering punch, carrying her forward. Enemy champions that Vi collides with stop her movement and are

blasts through her target, dealing damage to enemies behind it.

Vi runs down an enemy,

knocking aside anyone in the way. When she reaches her target she

knocks it into the air, jumps after it, and slams it back into the ground.

At home in top lane or the jungle, Vi's playstyle revolves around pummeling opponents and tearing into and shattering their

Vault Breaker a second time causes you to dash forward, dealing damage to units and

knocking back enemy champions. Early game, Vi excels at bullying opponents while shoving the lane with

Vault Breaker and the AoE damage from

Excessive Force. Skillful use of

Excessive Force allows you to quickly clear your lane while harassing opponents trying to get in close to last hit minions.

ultimate allows you to charge through your opponents' front-line and crush their carries.

Assault and Battery locks on to an enemy champion. You then chase them down, uppercutting them into the air. Enemies unfortunate enough to be in the way are knocked aside. High damage,

knockbacks make you a disruptive force. Since Vi's attacks and activated abilities apply stacks of

Denting Blows, you can increase your

damage significantly against armored opponents by just doing what you do best: punching. To top it all off, Vi's

Are you ready to slip on your gauntlets and show off your pummeling prowess? Once your opponents get a glimpse of your heavy weaponry, it's punch or be punched. 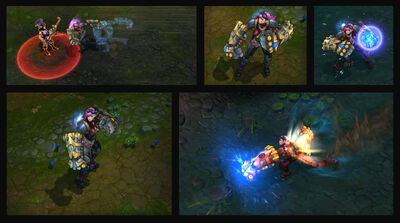 Welcome back to another entry in the dev blog! Today we're going to be taking a time machine back to the creation of

Vi, the Piltover destroyer of all things squishy. There were a lot of challenges involved in the making of Vi (including thinking up words that begin with Vi-...) but there's a lot to share here, like how we design cohesive champion kits and how many different ways there are to punch things in League.

So without further ado, I'll let Gypsylord take it away!

On my first day at Riot I saw a concept art by Paul 'Zeronis' Kwon for a female 'Piltover Enforcer' on the ideation wall with a post-it note that read: "OMG I will cosplay the *%&$ out of this!" I immediately fell in love with the concept, so I begged Joe 'Hephastopheles' Ziegler (the Lead Champion Designer at the time) to let me work on her for my first project.

Six months later Vi was released to terrorize the live environment, much to the dismay of every ADC player ever. In this blog, I'm going to discuss the evolution of Vi's kit over the course of her development cycle while highlighting the design decisions behind some of the changes we've made.

The first thing I did when I got the go-ahead to work on Enforcer (as she was called at the time) was to think of the core beats I wanted to hit with her gameplay. After staring at the concept art for a few hours and hearing her creative pitch (an ex-criminal turned bad cop with giant

I chose the above three aspects to focus on because I felt they best represented something we call a power archetype. When a player sees Vi's splash, they see a punk girl with an aggressive personality and giant oversized gauntlets that she uses to punch things real hard. Creating Vi meant we needed to deliver on that archetype - a super-aggro punk, similar to how someone picks

axe. If the gameplay doesn't deliver on the character's power archetype, it can lead to an unrewarding experience that's forced to lean on other things to be fun and satisfying (looking at you

Let's start with a paper kit (a theoretical champion kit) that got scrapped. You'll notice some base ideas for

Denting Blows that were present from day 1:

Vi's next attack after each spell cast deals bonus damage and shreds her target's armor.

roots herself and charges up her gauntlets over 2 seconds before dashing forward, dealing a ton of damage and

knocking back the first champion hit.

spell shield that reflects back the first spell to hit her.

Vi claps her gauntlets together on a nearby target, dealing damage and

slowing them. Any enemy killed gets 'gibbed', dealing Crush's damage and slowing in an area of effect while resetting its cooldown.

Vi dashes to a nearby enemy (range and speed similar to

suppressing her target for 1 second. During this time she could recast Steampunk Assault to select one of three effects:

After some preliminary playtests with feedback from various designers, one thing became very clear: while some of the spells were quite fun to use, they just didn't feel 'right' for Vi.

Vault Breaker was the sole exception to this, having received overwhelmingly positive feedback from day one.

I ended up taking a step back to examine why

Vault Breaker was doing so well. The conclusion I came to was the same point I outlined earlier: all of Vi's other abilities just weren't delivering on the character archetype.

Crush was fun but it felt like a ground slam, not a huge punch.

Throw made for awesome plays but why use gloves to pick people up?

Come at Me was a purely defensive move that was entirely reactionary - it had no inherent aggression.

Vault Breaker, on the other hand, was everything I wanted Vi players to feel. It was aggressive. It had impact. It felt very much like something that Piltover's bad cop would do to a fleeing criminal.

With Vault Breaker in mind I decided to scrap much of Vi's kit to start again with this rule: if an ability couldn't be described as a punch, it wouldn't fly. Throw and Crush were a lot of fun, but they weren't punches. A good lesson I learned from this was that sometimes awesome mechanics need to be put in storage if they don't accomplish the goal at hand. I still want to put

Throw into the game, but it just didn't fit on Vi.

After a few months of ideation, I ended up with much of the live kit that you see today, except for Vi's ultimate. Here's where she was prior to

uppercuts them into the air. 0.5 seconds later, she slams them back into the ground,

If you've ever played a squishy champion against a fed Vi, you likely know the terror that is Assault and Battery. So you're probably also looking at Power Slam and saying to yourself "That spell looks almost fair, why change it?"

Power Slam had two key problems. One, it just felt like a bad

Unstoppable Force (ult) it was shorter range, it stunned for less time, and the AoE was easier to avoid. Second, and more importantly, Vi as a character didn't have a unique strategic niche in the game. With this kit she did the same job as

Jarvan IV, but unless she could out-stat the both of them (more on this later), there was just no reason to pick her over

Cataclysm. I felt like Vi's ultimate, if done right, had the potential to solve both problems.

In my opinion, all champions should ideally have a reason to be picked over any other within their role. Each champion needs something unique to them that no one else has. When we do this right, we create characters that don't have to rely on raw power to be appreciated and can instead feel good about that one awesome thing they bring to a team. When you pick

Twisted Fate, you get his global

teleport and you think of all the awesome ganks you can pull off at level 6. There's always going to be the option to run that global comp and, regardless of power (up to a point) TF is always going to feel good in it.

As a counterexample, when you pick

Volibear, you can run around and 'do things' but you're only going to feel uniquely outstanding when you're simply out-statting your opponents. If your team wants a tank with a

flip, you should be running

Singed. If your team wants a tanky dude with a crazy single-target

Garen seems more viable. Maybe there are team comps who need a single-target

execute on a tanky bear with a

Volibear just doesn't have many things that are uniquely his own and, as a result, he's always going to be judged by how high his base stats are compared to the other champions in his role.

With the above philosophy in mind, I went in search for Vi's unique niche, and came out of the lab with

Assault and Battery. Why do you bring Vi to a team? Because she provides the best guaranteed ranged crowd-control in the game. You can't

Flash out of it. You can't

Cleanse it. You can't dodge it. Vi knocks you up for 1.25 seconds. End of story.

My initial desire was that when someone like Vi goes into the fight, the counterplay was less about avoiding that fear-seeking punch-missile and more about what you do after you get

Additionally, I'd be more than happy with Vi picking out her target at 800+ range if she's doing it to set up a teammate for a pick-off, but that's also not happening (see above re: grayscale punching) Vi should love extended fights thanks to

Denting Blows, and her scrappy punch-gal motif seems more in line as a brawler than a bursty assassin.

We're keeping an eye on Vi as she continues to rampage around the live environment, but I hope this gives more insight into how we approach champion design and specifically how Vi's kit came into being.

Vocals by Nicki Taylor from Running the Risk

She's such a misfit. Always ready to brawl
It's like her business, roughing up your friends is the law
There is no difference if you believe you're strong
She's a bulldozer making sure you're flat on the ground

She's like a boomerang, who never gives up
She flies in circles till she hits you and you're biting the dust
So just remember this, when she's chasing you down
Face first, you'll be thrown onto the Proving Grounds
She'll knock you out

Have you ever really wanted to be a total rebel flippin' tables on the enemy?
Did you ever try to further improve how fast you punch people through the roof? Oh,
Was there ever any certain time when you thought brute force and style combined? Well,
I guess now's time to shine. Cause finally, she's here, here comes Vi

And as a matter of fact, the best bet one has is to quickly react
To the first attack that's aiming for the bones
Cause she'll never pull back and just risk it


Have you ever really wanted to be a total rebel flippin' tables on the enemy?
Did you ever try to further improve how fast you punch people through the roof? Oh,
Was there ever any certain time when you thought brute force and style combined? Well,
I guess now's time to shine. Cause finally! She's here! Here comes Vi!

Over It (Legends of Runeterra)

Retrieved from "https://leagueoflegends.fandom.com/wiki/Vi/Development?oldid=3075986"
Community content is available under CC-BY-SA unless otherwise noted.