< Vi
View source
watch 02:53
GTA: The Criminal Enterprises - The Loop
Do you like this video?
Play Sound 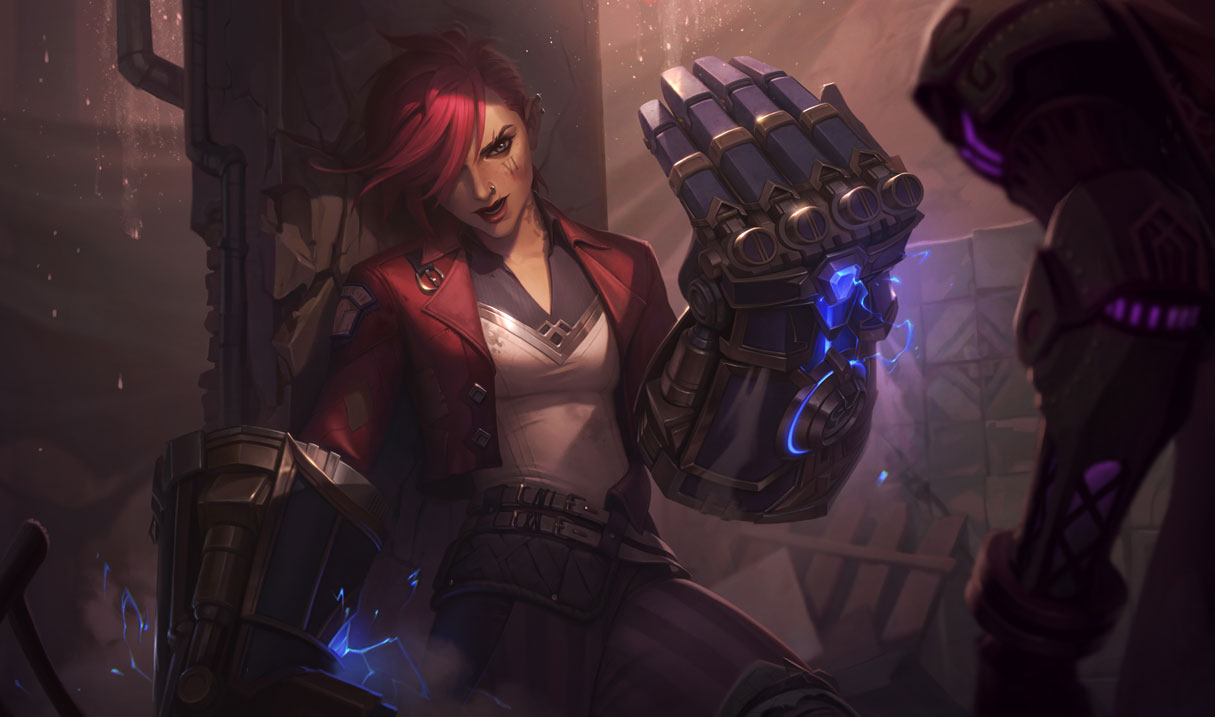 Vi, born as Violet, is a

Jinx's older sister. A hotheaded and fearless woman who excels at fighting and likes to solve her problems with her fists, she wields a pair of powerful hextech gauntlets that can punch through buildings-and people-with little trouble.

Violet is the elder sister to

Powder, both adopted by

Vander after the death of their parents in a battle with Piltovan enforcers. She is extremely protective of Powder, often defending her clumsiness against fellow adopted sibling Mylo. A natural brute, she often settles matters with her fists than her head.

Discontent with the state of the undercity, Violet believes the top siders are selfish and evil. One day, Violet, Powder, Mylo, and Clagger burglarize an apartment in Piltover, which ultimately caused an explosion that forced them to abscond from the scene.

Piltover wanted to see the culprits brought to justice. As the heist leader, Violet was prepared to surrender herself, but Vander locked her in a room and took the blame instead. From a window, she could see

Violet prepares to go rescue Vander, and tells Powder to stay behind. Conflict arose during the rescue, leading to Powder setting off a monkey bomb that killed their adopted family. After Violet learns of Powder's actions, she yells at her—calling her a 'Jinx' before walking away.

Violet took a rest at a far wall, but later saw Powder approached by Silco. Before she could approach, she was suddenly arrested by an Marcus.

After being released from prison, Vi searches for her sister with the help of

Jinx in her place. She proceeded to try to reason with her sister but lead to no prevail. Trying to apologize for abandoning her years ago.

Eventually, Vi would become an Enforcer for Piltover, partnering with Sheriff Caitlyn.

Vi is tall, athletic, and light-skinned. She wears common punk street fashion typical for Zaunite and Piltovan youth. Her most noticeable features are her mechanical augments inspired tattoos across her entire back and arms (including a VI tattoo on her left cheek), as well as her natural pink hair. As a child she would have a short hairstyle with one braid, later transitioning to punk hair with her bangs going to the right side of her head.

Before the raid on a shimmer factory, she would obtain the Atlas gauntlets which became extensions of her hands during combat.

Violet and Powder are sisters who grew up together under the care of Vander after their parents' deaths. Vi is overprotective of her sister, defending her often against their adopted brother Mylo who teases her. She is Powder's biggest supporter when they were young, they often sat together looking at the mechanics Powder had made.

After the kidnapping of Vander, Vi told her sister to stay back so she wouldn't get hurt. But it lead to Powder to break down, ultimately leading to her going to the warehouse and throwing a bomb, killing her adopted father and brothers by accident. Leading to Vi to call her a 'Jinx' and other painful words before walking away from her. In which actuality Vi was arrested, Powder believed she was abandoned. As a teenager Powder and Vi reunited but it was no longer Powder but rather

Jinx, which upset them both alongside Vi having Caitlyn by her side. Leading to them being separated again.

In efforts to protect her sister Jinx ended up killing Silco, later leading to all that was left of Powder to leave her mind and accept her place as Jinx.

After the uprising, Vander took in Vi as his own child. He would teach her to live a better life, guiding her to be a better person than himself. He would teach her how to fight, passing down his brawler skills in order for her to properly protect herself on the streets. His death greatly effected her due to seeing him as her father figure. She would continue Vander's legacy by following his teachings, such as incorporate his signature gauntlet brawling techniques into her fighting style. Sometimes when she is in a tough position she would envision Vander supporting her to not give up.

Claggor was the adopted brother to Vi. She respected him and his street skins, including with the rescue attempt in saving Vander. Years later after his death Vi would wear goggles resembling Claggor's. It is unclear if these were the exact same goggles he wore when he was alive.

Mylo, was her younger adopted brother back when she still lived with Vander. She would get annoyed by his constant inability to shut up in certain situations, especially when it came to ridiculing her younger sister Powder. However, she did respect his street skills and trusted him in saving Vander until his untimely death.

Ekko saw Vi as his mentor figure and an older sister. She would teach him how to be tougher and confident in himself, while also comforting him when he needed it. She would teach him some of her fighting moves with relative success. After she was imprisoned by the Wardens, Ekko would quickly take her lessons to heart, starting up a gang that would protect the undercity. After establishing the

Firelights, there would be a mural of Vi in their hideout in honor of a friend he thought he lost.

Years later Ekko would find out that Vi is alive. However, years of doubt and mistrust of the Piltovan government would lead him initially to capture her and Caitlyn in order to assess if they could be trusted. Vi would assure him that she was on his side, leading them to reconcile as friends.

Vi saw Silco as a criminal and a murder, due to being the indirect cause for Vander's, as well as Claggor's and Mylo's deaths. She would greatly resent him and any of his supporters, frequently beating them up if they ended up in jail while she was there. She would attempt to bring down his criminal empire by leading Jayce and the wardens to shut down on of his Shimmer factories. She would resent him for taking Jinx under his wing. Silco would try numerous times to kill Vi, which would ultimately lead to his death when Jinx choose to protect her sister over Silco trying to shoot her.

Vi and Caitlyn a deep and intimate relationship. Freeing her from prison, Caitlyn would directly be responsible in changing Vi's viewpoint of all Piltovans, showing her kindness and care she never got from topside. Caitlyn's kindness and concern over her would lead Vi into giving Caitlyn the nickname of "Cupcake", which Caitlyn would eventually take to heart. She would be the only person Vi would emotionally open up to, telling her about her past and current concerns. Both girls are greatly protective of each other, protecting each others back and saving each others lives when necessary.

Vi greatly resents Sevika for betraying Vander and siding with Silco. When she got free from prison, Vi would quickly track her down and engage her in a fight. While both hate each other, they respected each others fighting skills.

While Vi unofficially met Jayce during her escape from his workshop. Both would not truly known who each other was until years later. She would formally meet him during a Clan Council meeting. Viewing him as the only councilor willing to help her in her cause to take Silco down, she would track him down to his Talis forge and offer him a deal. Jayce would also be responsible for giving Vi her signature Atlas gauntlets. During the raid of Silco's shimmer factory, both would show coordinated teamwork in finishing up Chemtank Thugs. However, Vi would confront Jayce of his naive view of the undercity, as well as the harsh life that people there endure. 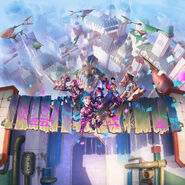 RiotX Arcane "Among Us" Promo (by Riot Contracted Artists Innersloth) 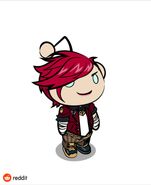 Look At My Face