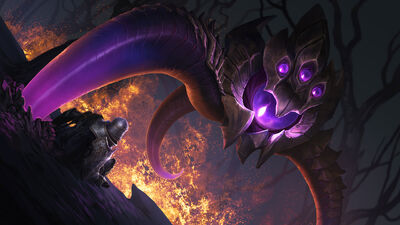 Vel'Koz has come to Runeterra. Witness the first moments as he makes his way to the Fields of Justice.

Vel'Koz, the Eye of the Void, revealed

The Void is preparing to spill forth its latest monstrosity:

Vel'Koz. A terrifying being created for the sole purpose of learning, Vel'Koz absorbs knowledge and accrues understanding through a multitude of tests and scans. Unfortunately, those very tests, while extremely productive for Vel'Koz, have a tendency to utterly destroy his subjects.

Vel'Koz's abilities Deconstruct those they strike. After being hit three times by his abilities, minions, monsters and enemy champions are Deconstructed and suffer bonus true damage. Enemies lose their Deconstruction stacks by avoiding Vel'Koz's attacks for a short while.

Vel'Koz fires a plasma bolt that

slows and damages the first enemy struck. Once Plasma Fission hits, reaches its maximum range or is

reactivated a second time, the bolt splits at a 90 degree angle. The split bolts deal the same damage and apply the same

Vel'Koz sends out a straight line blast that tears open a temporary rift to the Void before exploding. Both the initial tear and the delayed explosion damage apply

After a brief delay Vel'Koz disrupts a nearby area, damaging and

launching all enemies caught into the air. Enemies hit that are close to Vel'Koz are also

Vel'Koz channels a ray of infinite energy that follows the cursor for a brief while, damaging,

Deconstructing all enemies in range.

Vel'Koz is a ranged mage born to blast out overwhelming damage over sustained fights. With long-range harass available from the start of the game, Vel'Koz is a fragile but threatening early presence who relies on his teammates' protection to bring his full force to bear come late game.

Vel'Koz is a creature of raw power, not speed, and as such carries out his finest research on the mid lane of Summoner's Rift. The towers here are placed closer together, giving the Eye of the Void less distance to travel when enemy junglers dare get between him and his research subjects. A short autoattack range means Vel'Koz is often in the thick of the fighting, but he has the necessary tools in his abilities to dissuade his lane opponent from engaging. Enemy midlaners within their own minion waves are vulnerable to poke through

Void Rift, while opponents caught in the open make easy targets for

Organic Deconstruction against his opposing laner deals substantial true damage, forcing his counterpart to choose between moving in to secure minion gold or retreating until their

Deconstruction stacks have dissipated. Aggressive enemies risk a quick death once Vel'Koz catches them with further rounds of

Tectonic Disruption, while those that flee are still subject to considerable ranged harass. With clever aiming and timing of

Plasma Fission's second cast, Vel'Koz can both steer his ability around enemy minions and gain additional range through geometric finesse.

Vel'Koz becomes an entirely different beast once he gains access to

ult deals devastating amounts of damage to all enemies caught, but its long channel time and slow turn speed makes initial positioning absolutely paramount. Because of this, Vel'Koz does best bringing his

ult to bear following a few successful rounds of poke, after his opponents are sufficiently researched with

Organic Deconstruction and wounded enough to keep their distance. Even the minion cover often granted by distance is ignored by

As teams start skirmishing around Summoner's Rift, Vel'Koz is safest positioning himself within or behind his allies, harassing his enemies with repeated casts of

Tectonic Disruption. When caught in unfavorable positions, Vel'Koz fires off

Plasma Fission while retreating to kite his pursuers and positions

Void Rift in choke points to dissuade enemies from following further. In favorable situations, Vel'Koz uses the same ability to separate his subject from its pack before unleashing

Plasma Fission to quickly catch and dispatch them.

In full-scale teamfights, Vel'Koz again works best from the back line, tossing out damage and crowd control with

Plasma Fission as he builds

Deconstruction stacks on his enemies. Allied protection is key here as enemy bruisers, once they get to Vel'Koz, make short work of the tentacled glass cannon. Still, Vel'Koz has a few tricks of his own to ensure his safety:

Plasma Fission makes for an excellent kiting tool, while the combined knock back and knock up from

Tectonic Disruption allows Vel'Koz to reposition away from danger. Finally, once enough enemies are primed from his harass, once his team has set up a safe area for Vel'Koz to channel in, the Eye of the Void unleashes

Life Form Disintegration Ray to melt through the massed enemy ranks and leave his foes staggering under sheer, overwhelming damage.

Vel'Koz is the monster of choice when you need long-range poke damage or... a true-damage laser

beam! Melt their frontline, then obliterate their backline.[4]

Vel'Koz shoots a bolt of plasma that splits in two on

reactivation or upon hitting an enemy. The bolt

slows and deals magic damage on hit. Plasma Fission refunds half its mana cost if it kills a unit, and the target indicator now only displays for Vel'Koz.

Vel'Koz opens a rift to the void that deals an initial burst of magic damage, then explodes for a second burst of damage after a delay.

Vel'Koz causes an area to explode,

knocking up enemies, and

Vel'Koz unleashes a channeled beam that follows the cursor for 2.5 seconds that deals damage and

slows enemies. All enemies that are

Researched champions, but no longer

Retrieved from "https://leagueoflegends.fandom.com/wiki/Vel%27Koz/Development?oldid=3075985"
Community content is available under CC-BY-SA unless otherwise noted.