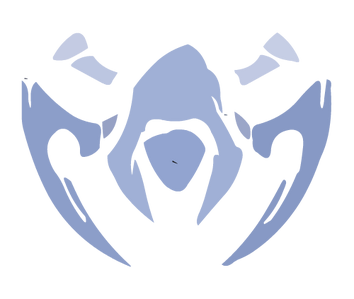 Hakumen the White Void is a custom champion in League of Legends.

Notes: Hakumen is a fictional champion concept, based off of the Blazblue character Hakumen. This page is a work in progress, and not the final version of the champion.

Passive: Hakumen gains Magatama over time. Many of Hakumen’s skills require Magatama to activate. Hakumen can hold a maximum of 8 Magatama at any one time. He gains 1 Magatama every 4 seconds. These are represented by a segmented bar above his head, much like mana or energy is shown. Magatama regeneration is affected by cooldown reduction.

Hakumen gains his Ultimate, Zanshin, at level 1. Zanshin is never manually leveled up. Instead, Hakumen’s other three skills all have 6 total levels instead of 5.
Info

Functionally, Magatama is extremely similar to the existing system of Energy, but it's unique enough to deserve its own new classification.

Passive: Every 8 / 8 / 7 / 7 / 6 / 6 times Hakumen deals physical damage to an enemy from a basic attack or skill, Hakumen’s next basic attack deals true damage.

Active: Hakumen dashes in range 450 while ramming into any enemies with the hilt of his sword, doing physical damage and stopping at the first enemy hit. This dash can be executed a second time within 3 seconds after the first dash. The second dash has range 375 and slows the movement speed of the hit enemy by 25 / 30 / 35 / 40 / 45 / 50% for 1.5 seconds as well as doing the same physical damage as the first dash. Each dash costs 1 Magatama.

Neither dash can pass through terrain.
Info

Positioning, escaping, and initiating. This is your main mobility tool.

Active: Hakumen quickly kicks upwards in front of him which rips through the air, doing physical damage to all targets in a 375 range and 90 degree cone in front of him. All enemies hit by the attack are stunned for 0.5 seconds and have their armor reduced by 10% for 4 seconds. This costs 2 Magatama.

A rather standard CC and debuff skill. Does solid damage, but it's avoidable and the stun only lasts for half a second. Primarily useful as an interrupt or as the opener to a combo.

Active: Hakumen swings his sword downward on a single target enemy, doing physical damage. This skill can be executed a second time within 3 seconds after the first use of the skill. The second swing hits horizontal instead of vertical, and hits any enemies in a 400 range and 90 degree cone in front of Hakumen with the same physical damage. Each swing costs 2 Magatama each. The first swing does 4% of the target’s current health as additional magic damage, and the second swing does 4% of the target’s missing health as additional magic damage.

A great opener to a combo, and the second part of the skill makes for a solid execution.

Active: Hakumen guards against enemy attacks, suppressing himself and gaining 35 − 60 (based on level)% damage resistance for 1 second. During this duration, if Hakumen is hit by any enemy skill damage, he gains 1 Magatama immediately, gains 20 − 40 (based on level)% increased attack speed for the next 3.5 seconds, and creates a 300 radius circle at his location. The next enemy champion or champions to enter the circle are snared for 2 seconds, and the circle is destroyed. This circle automatically disappears after 2 seconds. The cooldown of this skill is reduced by 1 second every time Hakumen lands a basic attack on an enemy.

Make plays, tank harass when you have to, snare junglers when they come in for ganks. This skill has so much utility it's absurd. The passive threat of Zanshin will make enemies think twice before diving you under tower. The snare can also keep some melee champions out of autoattack range for a hit or two due to your fairly long melee range. When on cooldown, you lose a lot of your dueling and anti-dive potential, so be careful.

Zanshin does not stop displacement from skills such as Blitzcrank's Rocket Grab, or crowd control from such skills such as Morgana's Dark Binding, it only mitigates damage.

Hakumen's effective range may seem small, but you can combo Firefly with Crimson Lotus (Q-W-Q) to harass for half your bar if you feel it's safe enough to do so. This robs you of your escape temporarily, as well as 4 Magatama, but it's a fairly strong harass combo. You can also fake out the opponent with Q-R-W-Q, although it's much more risky if they don't go for the bait.

The range on Rending Steel, however, is quite small, and the first part is single target only, so generally you want to use this on enemies that you know you can evaporate quickly. It still has its uses against tanky champions due to the %HP magic damage, but this is mostly a carry-killing tool.

Keep in mind, your Level 3 game is strong, but your Level 6 strength isn't particularly good when compared to champions that excel when they get their ultimate, so you may have to play safer or roam depending on your lane opponent.

I build my assassins a little bit tanky so you can survive long enough to do your full burst. Consider going potions early on, then getting a Doran's Blade or two before a Giant's Belt. You'll have damage for kills and harass, but also enough survivability to tank heavy harass and bully lanes. Ideally, you won't have to base too often with Doran's Blade + The Bloodthirster + Giant's Belt, and can sustain and continue to roam and make a solid presence.

While Youmu doesn't like The Black Cleaver very much, they consider it to be a bit more important on Hakumen, since his position as an AD caster allows him to rack up stacks on it fairly quickly, and he benefits from continuing to attack after it has built up to max stacks, unlike some other AD casters. If you run Armor Penetration runes, rushing a Brutalizer won't help that much outside of cooldowns, but it might be more useful if you are running a more Attack Damage centric page.

This is not a very good build, or one that I recommend, but it technically can work due to the combination of your Magatama, your Crimson Lotus passive, and your Zanshin active, when combined with solid base damage values. Again, not particularly recommended, but it could be silly. Sword of the Divine for full ham.