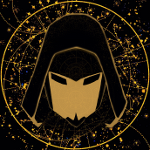 "In the vast darkness of space are born terrible, beautiful things—Cosmic creatures of sublime love, and the unknowable monstrosities of the Dark Star. These are the children of silent gods, and they are finally coming home." -

Dalerem Tesal once graced the vast emptiness of the cosmos with celestial wonders of his own devising. Now, he wields his awesome power at the behest of a space-faring empire that tricked him into servitude. Desiring a return to his

star-forging ways, Dalerem Tesal will drag the very stars from the sky, if he must, in order to regain his freedom.

The appearance of a comet often portends a period of upheaval and unrest. Under the auspices of such fiery harbingers, it is said that new empires rise, old civilizations fall, and even the stars themselves may tumble from the sky. These theories merely scratch the surface of a far more bizarre truth: that the comet's radiance cloaks a cosmic being of unfathomable power.

The being now known as Dalerem Tesal was already ancient by the time stellar debris first coalesced into worlds. Born in the first breath of creation, he roamed the vast nothingness, seeking to fill a canvas of incalculable breadth with marvels whose twinkling spectra brought him considerable delight and pride.

A celestial dragon is an exotic creature, and as such, Dalerem Tesal seldom encountered any equals. As more forms of life emerged to fill the universe, a multitude of primitive eyes gazed up and beheld his work with wonder and breathless pondering. Flattered by this audience of countless worlds, he became fascinated by their fledgling civilizations, who crafted amusingly self-centered philosophies on the nature of his stars.

Desiring a deeper connection with one of the few races he deemed worthy, the cosmic dragon selected the most ambitious species to grace with his presence. These chosen few sought to unravel the secrets of the universe and had already expanded beyond their home planet. Many verses were composed about the day the Star Forger descended to a tiny world and announced his presence to the Targonians. An immense storm of stars filled the skies and twisted into a massive form as marvelous as it was terrifying. Cosmic wonders swirled and twinkled throughout the creature's body. New stars shone brightly, and constellations rearranged at his whim. Appropriately awed by his illuminant powers, the Targonians titled the dragon Dalerem Tesal and presented him with a gift as a token of respect: a splendorous crown of star-gems, which he promptly donned. Before long, though, boredom drew Dalerem Tesal back to his work in the fertile vastness of space. However, the further from the reach of that tiny world he traveled, the more he felt a grasping at his very essence, pulling him off his path, directing him elsewhere! He could hear voices shouting, commanding, from across the cosmic expanse. The gift he'd received was no gift at all, it seemed.

Outraged, he fought these controlling impulses and attempted to break his bonds by force, only to discover that for each attack against his newfound masters, one of his stars vanished forever from the firmament. A powerful magic now yoked Dalerem Tesal, forcing him to wield his powers exclusively for Targon's benefit. He battled chitinous beasts that tore at the fabric of this universe. He clashed with other cosmic entities, some of which he had known since the dawn of time. For millennia, he fought Targon's wars, crushed any threats to its dominance, and helped it forge a star-spanning empire. All of these tasks were a waste of his sublime talents; after all, it was he who birthed light into the universe! Why must he pander to such lowly beings?

As his past glories slowly vanished from the celestial realm for lack of maintenance, Dalerem Tesal resigned himself to never again bask in the warmth of a freshly ignited star. Then, he felt it - a weakening in his unwilling pact. The voices from the crown grew sporadic, clashing, arguing with each other while some fell ominously silent. An unknown catastrophe he could not fathom had thrown off the balance of those who bound him. They were scattered and distracted. Hope crept into his heart.

Driven by the tantalizing possibility of impending freedom, Dalerem Tesal arrives on the world where it all began: Runeterra. It is here the balance will finally tip in his favor. And with it, civilizations across the stars shall bear witness to his rebellion and again play audience to his might. All will learn what fate befalls those who strive to steal for themselves the power of a cosmic dragon.