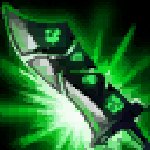 So I should tell about myself here?

(NOTE: The Wall of Text is maybe not that interesting for you. You can skip it.)

I guess I can tell about what I like and do in League of Legends. I started some time ago (12th of December 2011, I think. The last Saturday before Ahri release), and I'm now level 30 (and level 29 on an other account). I have, however, not played any ranked yet.

Back when I started, I first played Riven a bit, but I couldn't really play her (LoL was my first MOBA), and my brother (who I got the game from) said I could maybe better start with Caitlyn. Which I did. Some time later, I could play Anivia a bit (she was the one I used after Caitlyn was not free to play anymore), and Morgana, Heimerdinger and Fiddlesticks. However, I should maybe not include Morgana in that list, because I now know how I sucked with her, in fact. I leveled up my Q first, and didn't put points in my shield. Some time later, I also played Ashe and Teemo well, where I also played Caitlyn when she was free to play.

Then (part two of the story) Riven was free to play. I had been playing for something around three months at that point, and I had also wondered if I would like her now (at that point, Tryndamere and Nocturne were the only melee I liked. I don't know if I tried many more). So I played her. And had a new main. Her mobility turned out to be exactly what I liked for a champion. At this moment, I was level 15-20 on both of my accounts. In this Riven free week, I also made the swap of mostly playing normal games, instead of the bot games I started with. However, my build for her was not that good yet, and it took some more time before I cleaned that up.

After some bad things, like getting outlaned 2vs1 against an Olaf, happened. I played her less, and played Ashe (who was my main before) more again. However, I did not farm really well, and was often playing bad, and a few times almost feeding. Because of all those lost games (of which most were, even tough I didn't farm properly, not my fault), I decided to buy Olaf without having tried him once, because he was just an unstoppable force whenever I saw him. The first day I played him, I broke my 12 lose streak. And because of the help of a friend who has over 10 years MOBA experience, I also used proper bruiser builds. After some time, I played Riven again. And crushed my top lane enemy. And crushed my enemy again. And made two enemies tower hug on my own, after my jungler had ganked twice. And dragged a 4vs5 game to 63 minutes. And so on.

She is now my main again, and the Riven page will be the page where you will find me most often...

As a last note, this bad farming (which was, by the way, only with AD carries) is not a problem anymore. I carried a game with Ashe in the first game I really managed to farm. :)

I have now also made an account on the Public Beta Environment, to try new champions with the bonus IP and RP you get, and I'll also report bugs I find.

Because of this, I have added a lot of new champions to my favorites. Fiora was one of the first of them, when I noticed she was not overpowered, due to the fact that she is a melee carry. Yes, carries are right-click champions. But some of the ranged (Ashe and Varus, for example) and the melee carries (just Fiora, Trynda and Yi, I'd say, but I'm going to try Olaf and Riven with carry builds too) require very good positioning to deal their damage without getting focused. Melee carries most of all. Your 2000 (or less) health bar must be next to your enemies without them attacking you. Other champions I learned this way are Irelia and LeBlanc. And there are also A LOT of champions I am still going to learn there. <3 PBE.

NOTE: Some things in these lists (like the Irelia solo Nashor without life steal or spell vamp) are not viable for normal games, and I don't pretend them to be. So please no comments like "OMFG YOU BUY MADREDS BLOODRAZOR ON IRELIA???" or something like that. I only do that when I'm having some fun vs bots.

NOTE2: Those lists are mostly for my own fun, but I might do something like posting a blog with what champions can solo Nashor without any life steal or spell vamp.

NOTE: Doesn't happen often. You have to be lucky in two ways. The bots must be together, and your allies must make no kills.

I think I got a lot of them lately...

A list for myself because I want to know how true the gains/losses of LP are for someone who is gaining Elo on a steady rate (55-60% win rate).

Template category (just so that I can easily find them):

Retrieved from "https://leagueoflegends.fandom.com/wiki/User:Leyrann?oldid=1889487"
Community content is available under CC-BY-SA unless otherwise noted.