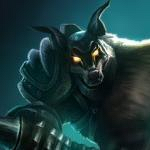 Hi there, newbie, I'm KolakCC! I'm a relatively new editor (any mistakes or errors I find, I'll try to fix) I would like to add that I am an experienced HTML/CSS developer. If there is anything I can do around here that involves HTML/CSS, please tell me! Leave a message on my talk page!

I'm desperately in need of more things to add to this page!

Nothing much to be proud of here... I dumped

Enhanced Recall's files and uploaded them to the wiki.

Rumble is such an amazing toplane. Nobody seems to play him, and everybody underestimates his damage. He's really my #1 character. I have a 66% win ratio with him in ranked (77/41 W/L) which is really good, in my opinion. At the moment of writing this, I've played 403 + 377 ranked games, which means I've played Rumble about 1 in 6 games.

Also, yes, I jumped the

Nasus at the moment! I dump/main characters really fast. I like Nasus because you really need some patience to play him. Farm his Q up, and smack people with it later. I also like how you can be a badass tank or an awesome DPS with him.

Pantheon! He seems so awesome and fun to play. I've already bought him, now comes the learning process.

I'm really sad about the support nerf. I really liked to play

Sona before all of this... but now it just seems pointless.

Oh, and I was really into

Urgot until I realized that he can't bring anything to teamfights (well, he's nice to 3v3 with)

Wow, I'm really a sucker for evil skins, aren't I? When these come on sale, I'll probably buy them.

Retrieved from "https://leagueoflegends.fandom.com/wiki/User:KolakCC?oldid=2743271"
Community content is available under CC-BY-SA unless otherwise noted.