Urzeris is a coastal city of northern Shurima, now currently occupied by Noxus. 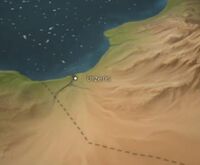 Its current governor is Steward Zikka Taum'Vin. Its most well known trade good is Urzeris Salt. Marcus Du Couteau with his family was stationed close to the governor of Uzeris before his assassination. Both