Runeterra Prime
The Ursine Lands is an island region in the Ice Sea off the coast of the Arctic. It can be found just above the northern Freljord.

Champions of the Ursine Lands

The Ursine, or The Lost Ones, dwell in the north most parts of the Freljord. Entirely consisted of Spirit Walkers, the Ursine are human shapeshifters who serve the Great Spirit of the Bear known as

Volibear. Volibears servants are entirely devoted to their masters will and cause. While some retain their human appearance, most permanently shapeshift into grotesque approximations of wild animals and other types of monsters. The tribe has existed for as long as humans settled the Freljord, ever feared and respected by the lands inhabitants. While humans and Iceborn alike have not been able to defeat this tribe, the Winter's Claw

Udyr have been able to form a temporary alliance with the Ursine to fight other larger tribes such as the Avarosan and Frostguard. Only a few beings are able to match Volibears might, such as the Great Spirit of the Ram known as 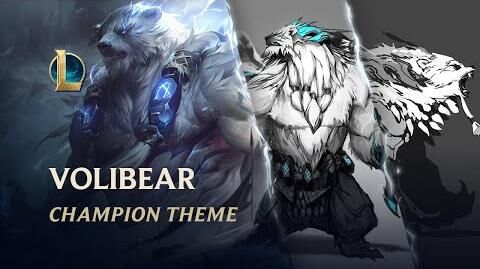 Runeterra
Community content is available under CC-BY-SA unless otherwise noted.